Trivia Thursday: Icellie and Henkie on top at Harness and Gelder foals 2018 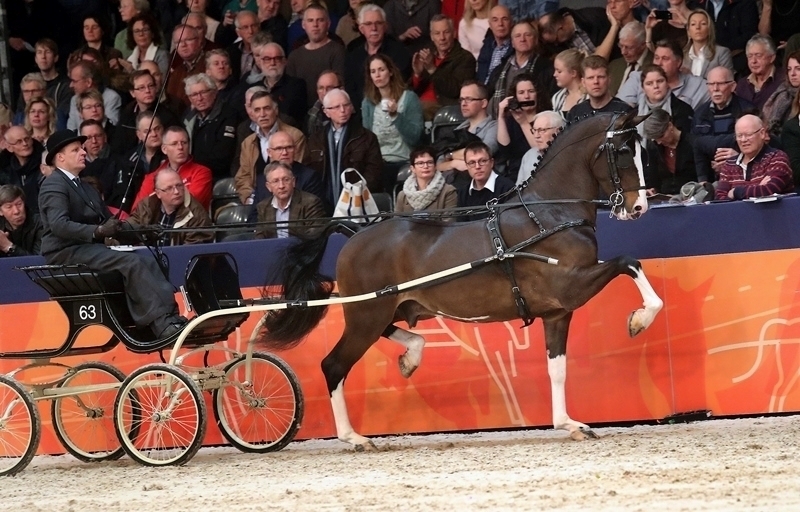 The past week, we showed you which dressage stallion has the most offspring in 2018. That was without a doubt Just Wimphof. The same we can do for the harness and Gelder type foals. Are you curious which stallions produced the most foals in 2018? Then read on!

The jumper foals are in the majority with more than 5,600 registered with the KWPN last year, followed by the dressage foals with almost 4,700. Nearly 600 foals were registered as KWPN harness horse and the number of Gelder type foals was almost 200.

The 600 harness horse foals descend from 58 different stallions. Bocellie-son Icellie is in the lead with 82 foals born in 2018. Icellie also dominated at the National Foal Inspection for harness horse foals last summer. Five out of the nine foals in the Championship ring were sired by him. The champion foal Nicellie, the reserve champion Nardus and the third placed foal Nico, are all descendants of Icellie. Icellie's popularity has therefore risen compared to a year ago. Last year he was in fourth place in this ranking with 41 foals, so this number has exactly doubled last year.

In second place in this ranking we see Idol (by Manno), compared to last year he has risen one place in the ranking with 73 foals registered. Exactly 20 more than in 2017. Cizandro (by Waldemar), the main supplier of 2017, got 53 KWPN foals registered in 2018. This stallion now has four KWPN approved sons and also breeds champions. Based on his offspring, the oldest of whom turned seven years old last year, Cizandro was recently awarded the keur predicate. In 2013 this stallion was named Harness Horse of the Year and last summer he won the prestigious Renovo Scale.

Places 4 and 5 in this ranking are very close to each other. With 36 KWPN foals, Delviro HBC is in fourth place and with only two foals less, 34, Eebert closes this ranking. Vulcano son Delviro HBC was last year still good for second place, now we see him in fourth. Eebert, the former Stallion Show Champion, won the Oregon Trophy for the third time in a row at the KWPN Stallion Show. Last year several of his offspring made a very good impression in the show ring and on the competition fields.

The almost 200 Gelder foals were by 54 different stallions. With almost 20% of the total number of Gelderland foals born in 2018, Henkie is well ahead! This Alexandro P-son has been used extensively by the Gelder breeders for years, but also the dressage breeders appreciate him. Last year Henkie got 36 Gelder foals and 46 dressage foals registered with KWPN. During the final for six-year-olds at the World Championships for Young Dressage Horses, the jury was enthusiastic about Henkie: We think it is a super horse and expect a lot from him.” In second, we see Henkie's father Alexandro P with 18 Gelder type foals. This stallion received the keur predicate in 2017 based on the good performance of his offspring. Last year his daughter Kaya-Amanda achieved the highest marks at the studbook inspection: 90 points for her trot, supplemented by 85 points for conformation and her attitude. In third place in this ranking is Danser with sixteen foals, followed by Wilson with thirteen foals and Edmundo with eleven foals. The latest acquisitions of the Gelder breedingdirection, the five-year-old stallions Imposant EM and Ibsen B and the four-year-old Jupiler S produced seven, five and five Gelder foals respectively.

Are you expecting your (first) foal soon? Or are you planning to breed in the future? We have put a few things together for you. More information about registering your foal(s), with the All-in Foal Registration you only have to register your foal online and we will take care of the rest! We now also offer a special discount on applying for the D-OC predicate for your foal.