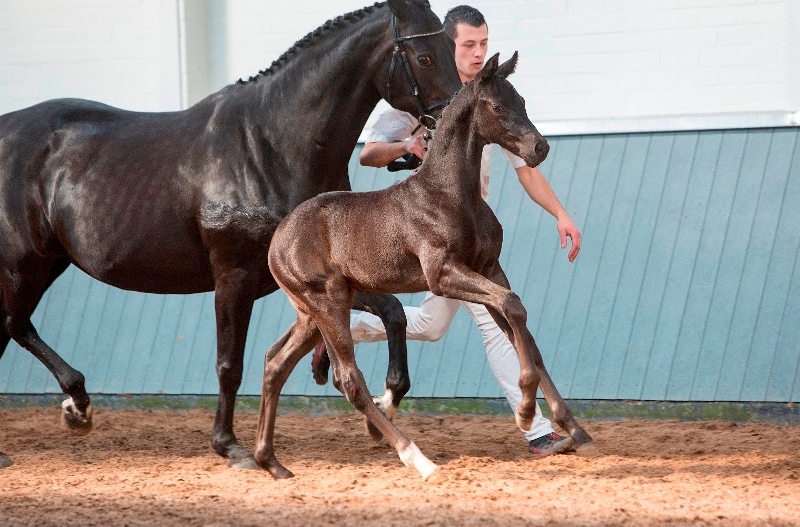 The Borculo Online Foal Auction’s first edition finished on Monday evening with the highest bid of € 14,000 for the appealing Totilas filly Ooh La La de Flora. There was a lot of interest in this beautifully bred foal out of Beauté GEP (Negro x Donnerhall) in advance. This was reflected during a successful online auction, which ended after several prolongations at the amount mentioned.

Second top seller Oakley W, an impressive colt by Halifax van het Kluizebos out of the dam Zilverstar W (by Zirocco Blue), was auctioned at € 11,000. Next in line was filly Osuussinaa (Colman x Calido I). This genetic high-flyer brought in € 9,500.

During this new auction under the umbrella of Foal Auction Borculo a total of ten foals were sold via www.veulenveilingborculo.nl. They reached a pleasing average of € 8,700. Both regular and new customers took part in this online auction. Foals were purchased by renowned sport and trading stables and two have a new owner outside the Netherlands, namely in Norway and Switzerland.

Collection CSI Foal Auction
The Borculo Online Foal Auction’s première has thus succeeded in its purpose as a new platform for early-born top foals. Adding an online auction to its existing regular auctions is also in line with the Borculo Foal Auction’s innovative nature and ensures further optimization of our auction strategy.

Next week, we will present an appealing collection of exclusive jumping foals for the Borculo CSI Foal Auction’s second edition on 24 May during Jumping Schröder Tubbergen, which already generates a lot of interest.

Please also keep a close eye on our website for a new scoop, entirely fitting this festive year in which the Borculo Foal Auction celebrates its 40th anniversary. We close off the 2019 auction season with the well-known Borculo Elite Foal Auction that has been on the agenda since 1979. This takes place Wednesday 28th August (jumping foals) and Thursday 29th at the appealing Paardensportcentrum Lichtenvoorde location in the town of Vragender.