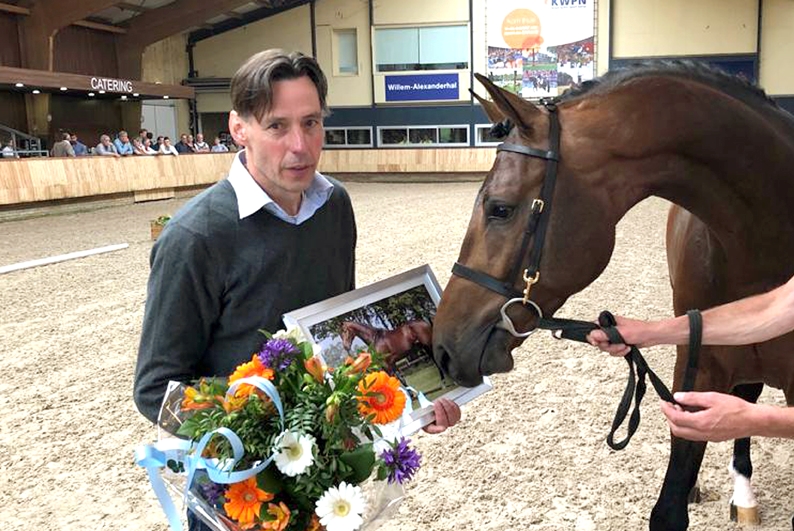 All eleven jumping stallions that participated in the final presentation are approved and registered in the studbook. With 88 points, Le Quirky JR, from the first crop of Grandorado TN, showed the most striking performance.

Nine three-year-old and two four-year-old jumping stallions are approved. Among them are two sons of top sire Cornet Obolensky. 86 points went to the champion stallion of 2018: Kannan Jr. (ds.Quick Star) from breeders Wobbe and Marietje Kramer-van der Meer from Oud-Beijerland and Sjaak van der Lei from Sint-Michielsgestel, and the big but light-footed Quornet STN (ds.Dakota VDL) from breeder Doreen Bosscher got 84 points.
The highest points (88) were for the champion inspection stallion Le Quirky JR (Grandorado TN x Canabis Z, breeder Johan Jonker from Hattem) registered with M. Quirke from Littleton in Ireland. "This was the first time that the performance test in the spring lasted only 50 days. The evaluation of this will take place at a later date," said committee chairman Cor Loeffen. “We can already conclude that we’ve had exam days on which it went more smoothly and more in harmony than this time. This is unfortunate, because it meant that not all stallions showed themselves optimally, but that is also why it is very useful for breeders to study the stallion reports well. We have followed the stallions closely throughout the performance test and based the points on the whole test. We are happy that we were able to approve some very good stallions!”

The approved three-year-old stallions are: