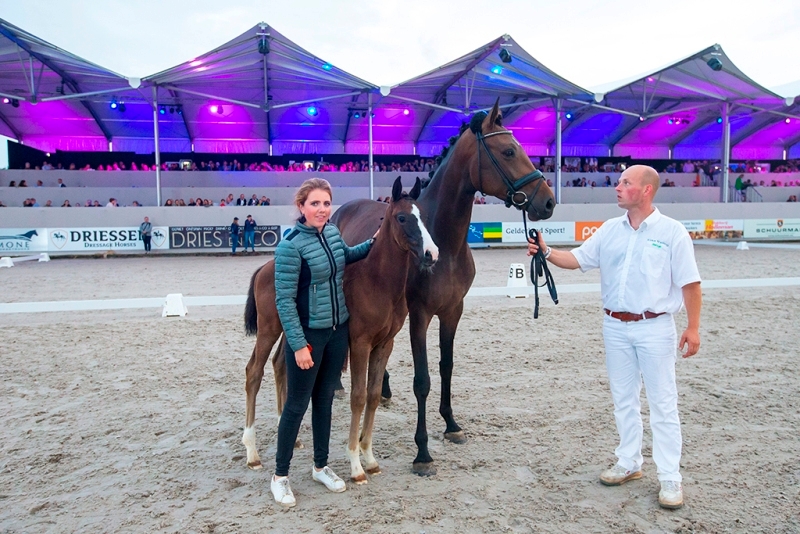 The first ever edition of the Borculo CDI Foal Auction was concluded with a spectacular € 35,000 euro German bid on Ovation (Imposantos out of Querida von Kukenmoor s.Quantensprung, breeder T. Driessen of Heelsum). The remarkable colt comes from the first year of foals by Imposantos, the stallion that was once himself sold at the Borculo Elite Foal Auction. The befitting Outdoor Gelderland Dressage Gala setting pushed the auction average to an excellent € 15,000 for the exclusive collection of dressage foals. Apart from the much-desired Ovation, more foals proved to be sought after. The appealing and strong moving O’Neill Texel (Daily Diamond out of V'Alcatrasse Texel elite pref prest IBOP-dres PROK s.Ferro, breeder W.T. van der Linde of Texel - De Cocksdorp) changed hands to a new Dubai owner for as much as € 18,000. Exceptional in many ways, Opicasso (Ferguson out of Zozelma keur pref IBOP-dres s.San Remo, breeders H. Tessemaker and C. van Suijdam of Oene and A.J. Scholten of Emst) came under the hammer for € 15,000 and will be staying in the Netherlands.

Last bid online
With Ovation’s sale as the climax, the first Borculo CDI Foal Auction can be considered an outstanding success. This small-scale auction during the popular Dressage Gala proved to be a wonderful choice. The memorable show by Edward Gal and Glock’s Total US worked as an extra appetizer during the “Like father, like son, like mother, like daughter” themed summer evening filled with sport and breeding. Apart from Opicasso’s sire Ferguson Bart Veeze presented Imposantos to the audience. The successful combination put on a superb show that apparently put the buyers in the right mood. For the first time, buyers could also make their bid online. This concept proved successful, as the last bid on Ovation was made through the Borculo Foal Auction website.

Next: Elite Foal Auction
Jan Markink, chairman of the Elite Foal Auction Borculo Foundation, was a contented man: “As an organisation we were excited to see how this new concept would turn out, and it was a big success! We strive for novelty in everything we do. Last year we initiated the small-scale auction of showjumping foals that recently had its second edition. We wanted a similar auction for dressage foals and thought, “What could be a better place to do this than during Outdoor Gelderland?” It was a pleasure organising an auction here. Those who weren’t able to buy a foal here, will get another chance during the Borculo Elite Foal Auction at PSC Lichtenvoorde in the Dutch Vragender on 29 August. The showjumping foals will be auctioned the day before.”