Trivia Thursday: Which Jumping stallions have the most Grand Prix-offspring? 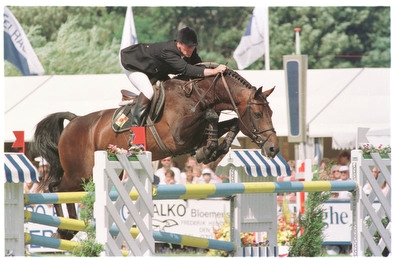 Every year, breeders make stallion choices with the ultimate goal of breeding a Grand Prix horse. But how many KWPN horses went all the way to Grand Prix level and which stallions have produced the most Grand Prix horses? Not only in factual numbers, but also in percentages. We had a look in the KWPN Database in search of these answers.

Last Trivia we did this for the dressage horses, in this Trivia Thursday, we only look at jumping horses that are competed at Grand Prix level. For example, there are also horses registered as dressage horse or harness horse, but we did not consider them in this ranking. In total it concerns over 2,700 KWPN registered horses that are jumped at 1.60m classes, Grand Prix 1.55m and Grand Prix 1.60m. 30% of these horses are mares.

Indoctro in the lead

If we purely look at the numbers, Indoctro leads with 93 Grand Prix horses, followed by Burggraaf with 79, Concorde with 76, Voltaire with 72, Heartbreaker in fifth with 48, Numero Uno follows with 47 in sixth place, Calvados with 46 in seventh, followed by Emilion with 41. Libero H and Corland both brought 39 Grand Prix horses and are in ninth place and in 10th we see Guidam and Nimmerdor with both 38 Grand Prix offspring.

The sires in the above top 10 do not only have many Grand Prix horses in terms of numbers, they also almost all have more than 1,500 KWPN registered foals. Indoctro for example has more than 4,000 and Burggraaf almost 3,500. To get a good impression, we have compared the numbers of Grand Prix jumping offspring against the number of KWPN registered foals of these stallions. This results in a completely different top 10.

Libero H in the lead

One of the most successful horses of the 90s is now in the lead. With 39 Grand Prix jumpers out of 580 KWPN registered foals, Libero H scores the highest in this ranking. No less than 6.72% of his descendants have reached the Grand Prix level. Some of his best known offspring are: the KWPN approved stallion Ikoon (breeder N.H. Sieling from Onnen) and Liberty (breeder Studfarm Oud Wierden BV from Hengelo) who was the best American combination with Laura Kraut at the Atlanta Olympics. His youngest Grand Prix descendants are Rocky SW (breeder B.J.M. Wezenberg from IJsselmuiden), Rennety (breeder Chr. Van den Hanenberg from Heesch) and Rorayo (breeder P. Groeneveld from Lattrop-Breklenkamp). Querlybet Hero follows in second place with 6.10%. He has got five Grand Prix offspring out of 82 KWPN registered foals. His daughter Zerly (breeder M.M.A. Everse from Waddinxveen) won the Vion Cup for seven-year-olds in 2011 and was produced to the highest level by the American Christine McCrea. Querlybet Hero's other Grand Prix offspring are: Arezzo (breeder G.M. Brouwer-Langerak from Lisse), Awriënt (breeder D. Nanning from Dalfsen), Already (breeder Stal Hendrix from Kessel) and eleven-year-old Diamond Dream (breeder D.P. Bakker from Goes). The Olympic champion Jus de Pomme is in third place with 6.05%, he is the sire of thirteen Grand Prix horses out of 215 KWPN registered foals. Including Marlou (breeder H. Rooijakkers from Prinsenbeek), VDL Nuit de Pomme (breeder VDL Stud from Bears), Octavia (breeder Stal Gasaya from Dordrecht) with Jurgen Stenfert and Play On (breeders B. Dirksen from Hattem and VDL Stud from Bears) with Beezie Madden.

Grandeur comes in fourth place with 5.56%, he is known as the sire of seven Grand Prix horses out of 126 KWPN registered foals. One of his best-known Grand Prix offspring is the KWPN-recognized stallion Modesto (breeder S. van der Meer from Surhuisterveen) that was ridden by Jean Marc Nicolas, and he also sires Storm (breeder J.H. Meppelink from Borculo) who was ridden by Geir Gulliksen. The KWPN-approved stallion Andiamo comes in fifth with 5.38%. He has 33 Grand Prix offspring out of 613 KWPN registered foals. Vicky Gold (breeder: H.E.P. de Man from Standdaarbuiten) scored no less than 9 out of 10 in the mare test and later finished in eleventh place in the five-year-old class of the VION Cup. Gerco Schröder produced this Andiamo daughter up to Grand Prix. Some other Grand Prix descendants are Pitareusa (breeder: F.C.A. Aarts from Tilburg) and Ulot (breeder A.C.M. Loos, Oud Gastel). With the sixth place in this ranking and a fifth place in the ranking based on numbers, Heartbreaker really stands out. Out of 989 KWPN registered offspring, 48 children have reached the Grand Prix, a percentage of 4.85. VDL Groep Zidane (breeder F. Kok from Etten) has often been able to make his contribution for the Dutch team ridden by Leopold van Asten and also the KWPN approved and preferent stallion Harley VDL (breeder M. van de Bruggen from Goirle) doesn’t need much more introduction. Heartbreaker’s youngest offspring at the highest level are Dominant H (breeder K. Hoorn from Scheerwolde) from Laura Renwick and Daniël (breeder Gebr. Bosch from Luttenberg) ridden by Angelie Von Essen.

In seventh place is the stallion Hors La Loi II, seventeen of 385 KWPN registered foals have reached the Grand Prix. For example his KWPN-approved son Untouchable (breeder W. van Hoof from Biest Houtakker), who remarkably has a Heartbreaker dam. Mclain Ward rode Hors La Loi II son Vocas (breeder A.P.J. Jacobs from Beuningen) at the highest level. Baloubet Du Rouet is in eighth place. Out of 320 KWPN registered he has thirteen Grand Prix horses. Among others the KWPN-approved stallion Bubalu VDL (breeder VDL Stud from Beers), who won team gold at the World Equestrian Games in Caen with Jur Vrieling. But also Taloubet (breeder A. Verhoeven from Zwijndrecht), who belonged to the world top for years with Christian Ahlmann. He won the Leipzig World Cup Final and participated in three more finals. At the Rio Olympics, the pair combination won team bronze and individually finished in ninth place. Arrayan (breeder B.J.M. Wezenberg from IJsselmuiden) also jumped to several Grand Prix victories, just like the recently deceased KWPN-recognized stallion Chaman (breeder BOA Agriculture BV from Enschede). We find the KWPN-approved stallion Gran Corrado in ninth place. He has nine Grand Prix offspring out of 226 KWPN registered foals. The stallion won team bronze at the European Championships in San Patrigano with Yves Houtackers. Timothy Hendrix rode Gran Corrado daughter Varanka (breeder F.L.M. Krauth from Ulestraten) at the highest level. Gran Corrado’s youngest offspring at Grand Prix is the 10-year-old El Corrado (breeder Equestrian Center Roermond BV from Roermond) who competed at 1.55m Grand Prix by Amber Fijen. Andiamo’s sire Animo is in the last place in this top 10. Andiamo (breeder A.C.M. Loos from Oud-Gastel) was already in fifth place in this ranking. Animo participated in the Olympic Games in Barcelona and in addition to Andiamo also brought Robin Hood W (breeder B.J.M. Wezenberg from IJsselmuiden) from Ben Maher, the KWPN approved stallion Regino (breeder J.I. Remijnse from Heythuysen) who also participated in the European Championships in Madrid and the mare Riovanni (breeder J. Coolen from Kelpen-Oler) who was ridden by Harrie Smolders.