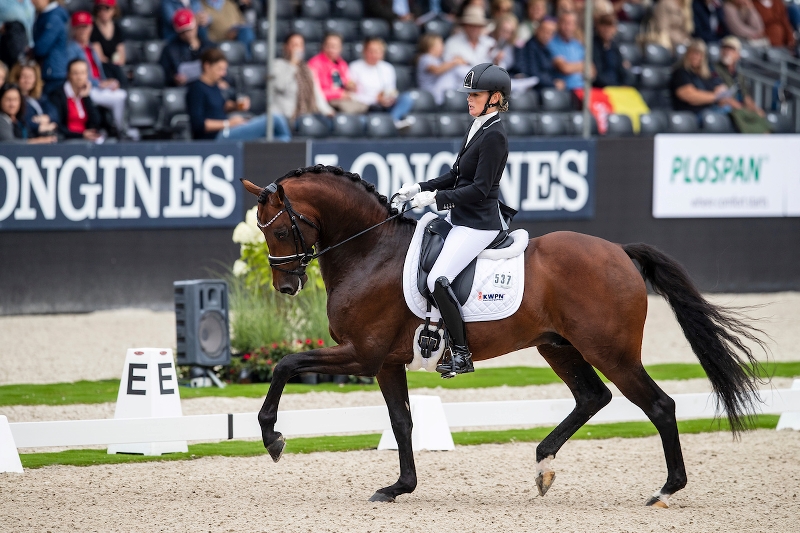 An exquisite group of five-year-old dressage horses kicked off the World Breeding Championships for Young Horses. Six horses scored over 90 percent, rising the expectations for the final. The class was won by Secret, a son of the former world champion Sezuan. The second position, including a 10 for the walk, was claimed by Valverde, a descendant of the KWPN-recognized Vitalis. The best Dutch result was for Bordeaux-son Johnny Depp and Renate van Uytert – van Vliet. Four Dutch bred horses placed themselves directly for the final.

The elastic Johnny Depp (Bordeaux out of Wiana ster pref prest by Jazz, bred by J.A. & B. Naber of Vredenheim) was strong in the trot (9.1), extra in the walk (9.7) and kept the nice, eager frame in the canter as well (9.2). The in Germany approved stallion scored the exact same percentage as Valverde, but based on the grades for submission and perspective, Johnny Depp was placed third (9.28).

Andreas Helgstrand and Jovian put up quite the performance. The balanced, yet expressive trot was awarded the ultimate 10. The walk (7.5) had overstep, but also some tension. A 9.8 for the canter, brings the stallion close to another 10. Two more 9.5s raised the total to 9.26. The points differ only slightly, so the final is not decided just yet.

Emmelie Scholtens steered Johnny Be Goode to 9.18 points. The Dream Boy-offspring (out of Amazing Grace prest by Tietse D) showed an uphill frame in each gait. Total: 9.18 points and fifth.

The powerful Jameson RS2 is quite the appearance in the arena. The trot (9.7) is impressive, the canter (9.8) is unparalleled. If the tension in the walk (7.4) improves in the final test, Mariek van der Putten may stir up the rankings. Total: 8.90 and seventh.

Just Wimphof to the small final

The KWPN-approved Just Wimphof, the second card in play for Renate van Uytert-Van Vliet, may test his luck in the small final. His 15thposition indicates that the De Niro-son (out of Rastede elite sport-dres IBOP-dres PROK by Riccione, bred by C. Rienks-Kramer of Westerlo) has a strong chance to place himself for Saturday’s final.

The best 12 combinations have placed themselves directly for the final that takes place on Saturday from 16.30 onwards. The other competitors start in the small final tomorrow at 09.00, of which the top 3 obtains a final ticket.