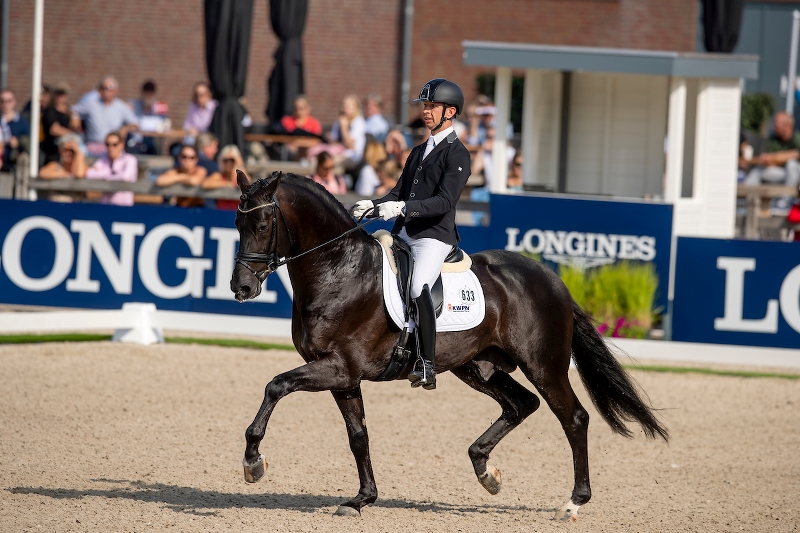 Blue Hors Zack put his mark on the final for six-year-olds. His son Zonik had three offspring in the final, two of them got a medal. The new world champion is Zucchero Old. This well-rouned Zonik-descendant and rider Frederic Wandres prevented former-champion Revolution to take home the gold again. The third place was claimed by Andreas Helgsrtrand as well, Zaphlin Langholt received 9.34 points. The shared fifth position of Bart Veeze and Wynton-offspring Imposantos was the best Dutch result.

Imposantos was praised for his walk, the KWPN-approved son of Wynton (out of Zarina elite IBOP-dres PROK by Krack C, bred by Will Wijnen of Berlicum) received a 9.8 for it. The natural ability in trot (9.5) was also appreciated by the jury. Some errors in the canter (8.8) pressured the score for submission. The 8.8 for perspective brought the total to 8.94 points.

Independent Little Me receives 9 for perspective

The seventh position was obtained by Independent Little Me (Uno Don Diëgo out of Wendel ster pref by San Remo, bred by M.H.J. Rothengatter of Nijensleek), who received a 9 for perspective. On behalf of the jury, Christopher Hess said the following: “We are looking at a dressage horse that excels in each gait. In the trot work his full potential comes out.” Total: 8.72 points.

The Bordeaux-son Ironman H (out of Zartina ster pref by Rousseau, bred by J.A.M. Hurkmans of Veghel) advanced to the grand finale via the small final. Presented by Finnish rider Yvonne Osterholm, the champion of the Swedish stallion show received a 9.3 for canter. Total: 8,56 points.

Beautiful flying changes for In Style

The KWPN-stallion In Style (Eye Catcher out of Sissy by Lorentin I, bred by Joop van Uytert of Heerewaarden) received positive comments on his canter and ability to collect. His flying changes in the canter were a true highlight. The trot had a lot of expression, but the connection and bend in the lateral work could be a bit better. Total for Hans Peter Minderhoud: 8.34 and a 12thplace.

The second horse for Bart Veeze in this final was Imagine (Dream Boy, out of Olivia keur sport-dres by Jackson, bred by E.M. Stam-van Waveren of Dalfsen). The mare was praised for her rideability, but lost points on the flying changes.