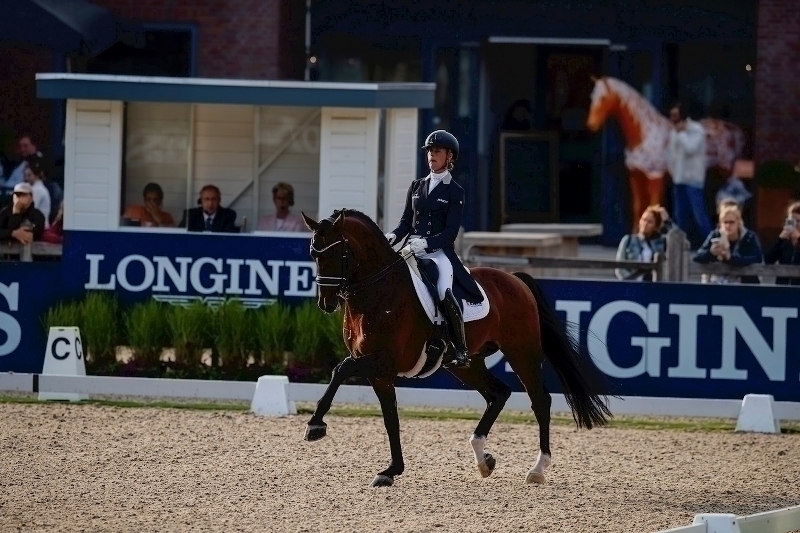 Just like last year, d’Avie, a son of the KWPN-bred Don Juan de Hus, claimed the world title. Four KWPN-horses qualified for final for the World Breeding Dressage Championships for Young Horses, another five had a Dutch-bred sire. The Gelder stallion Henkie was the first to start after the break and his test was valued at 81.18%, a sixth place.

The qualities of Henkie (Alexandro P out of Beaujamanda ster by Upperville, bred by G. Hekkert of Wijhe) were certainly appreciated in Ermelo. His rhythmic trot was rewarded with a 9.3. “This is certainly the quality we look for in the walk, a 9.5,” spoke Andrew Gardner on behalf of the jury. His canter received an 8.8. The mark for submission (7.8) reflected a few minor errors and the on occasion strong contact. Accompanied by the remark that the jury sees a lot of quality and talent, the perspective got a 9.

Elite mare Hautecouture (Connaisseur out of Desteny ster prok by Krack C, breeders Albert Drost and Joop van Uytert) energetically moved to the 8thposition with Dinja van Liere (78.88%). “Especially in the cadenced and expressive lateral work, you can see the level of education of this horse, an 8.8. In the walk (8.5), we appreciate the clear difference in medium and extended walk. The canter (8) started off with a lack of balance, although we could see the ability to collect in the pirouettes.”

This is the third year that Habibi DVB (De Niro, out of Davina elite pref sport-dres IBOP-dres prok by Johnson, bred by Van Baalen Dressage) made his appearance at the World Breeding Dressage Championships for Young Horses. This year, Mara de Vries seized a ticket to the final, through a solid performance in the small final. The chestnut stallion showed it belonged in the final, receiving a 9 for trot and a total score of 75.22%, the 11thposition.

Anne Meulendijks presented the light-footed Hot-Spot PB (Dancer Forever out of Korenda ster pref prest by Cocktail, bred by family Bijvelds of Erp) and placed 12th. The chestnut scored multiple 8s and above to receive 74.54%.