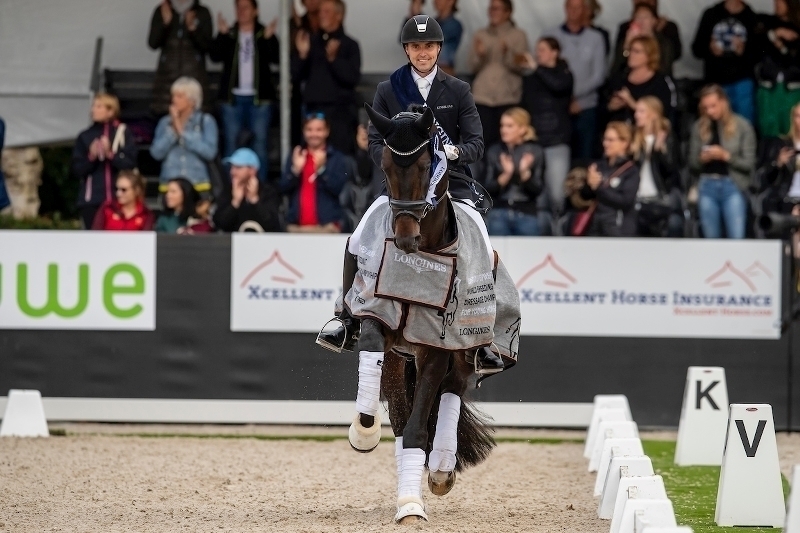 It took the judges a while, but the audience had no doubt who the new world champion should be. Jovian received a big round of applause before Andreas Helgstrand could even salute the jury. Never before, received a world champion four 10s, only the walk was marked lower.

From day 1, when Jovian arrived in our stables, I have said he is the easiest horse to ride. And I’m not saying this because we have won, but he has done three different stallion tests and in each he received a 10 for rideability from the guest rider. Sure, he does not have the most spacious walk, but he extends and collects very easily. I am glad the jury recognized this talent.” When asked if the brand-new champion is for sale, he says: “Everything is for sale, Helgstrand Dressage has grown into a large enterprise and that means we have to sell horses on a regular basis. However, Jovian is a popular breeding stallion and I have a strong co-owner: together we surely plan to keep him on for now.”

“What a fantastic mover,” exclaimed judge Maria Schwennesen after the test of the Apache-son (out of Zinith elite pref EPTM-dres D-OC by Tango, bred by E.T. ten Bosch of Driel). “The trot had so much spring and suspension and even with the huge amount of airtime he still matched between front and back. His walk is his weakest gait, we grant an 8.3 for that. The canter: well-balanced, always uphill and so fluent. Jovian is a display of pure self-carriage and suppleness. Plus, we have seen some good riding.”

Dutch influence on and off to podium

In place two and three, we see the worldwide influence of Blue Hors Zack. His son Sezuan, former world champion, sired both Secret, scoring 9.64 points with the Swedish Jessica Lynn Thomas , and Queenspark Wendy. This Danish mare moved to 9.42 points with Andreas Helgstrand. Further down the rankings, we see more Dutch blood. The willing and for 10-points walking Westfalian Valverde descends from the KWPN-bred Vitalis and comes out of an Ampère-dam.

The 9.02 score of number six indicates the incredible quality in this age category. Renate van Uytert- Van Vliet presented the super talent Johhny Depp. “He must be amazing to ride,” commented Maria Schwennesen. “Johnny Depp an excellent mover, but sometimes a bit too sharp which compromises the balance.”

The unusually bred Johnny Be Goode came close to a nine; 8.96. The Dream Boy-offspring (out of Amazing Grace prest by Tietse D, bred by Trea Mulder-Doldsma) received a 9.5 for walk and was praised for his willingness. “A lovely test with a willing horse that is responsive to the aims. On occasion he can be a bit too high in the poll.” A 9 for perspective brought the combination to the seventh position.

Marieke van der Putten steered  the somewhat tense Jameson to 8.84 points and hence an eight place. The Blue Hors Zack-son (out of Atilinda M keur pref IBOP-dres sport-dres by Negro, bred by Stal 104 of Wijdewormer) accepted his applause like a king. High marks for trot and canter, the walk did not come across as intended today.

Renate van Uytert – van Vliet and Just Wimphof advanced to Saturday via the small final. The De Niro-son (out of Rastede elite sport-dres IBOP-dres PROK by Riccione, bred by C. Rienks-Kramer of Westerlo) trotted for a 9. A mistake in the counter canter brought down the mark for submission. Total: 8.64 points and a 13thplace.