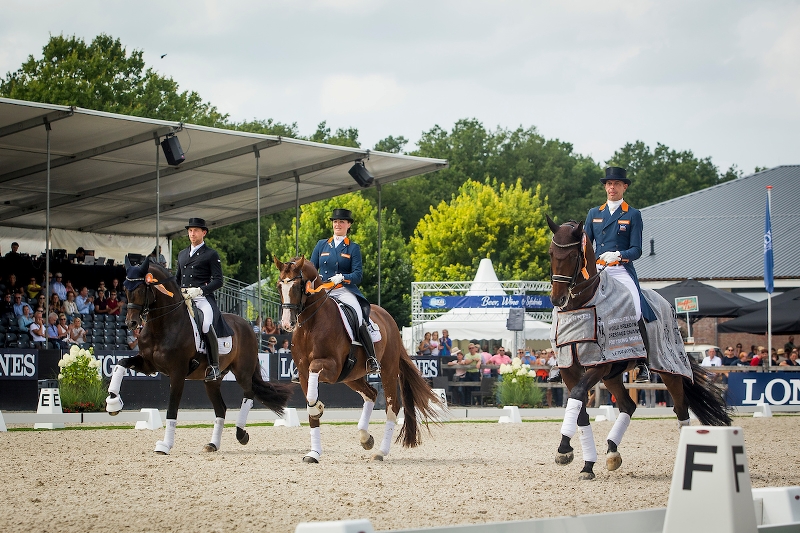 The complete top five of the CDI3* Grand Prix Freestyle to Music at Ermelo Young Horses, was made out of KWPN-horses. GLOCK’s Casper won and KWPN-recognized Hexagon’s Double Dutch placed second.

After their win in the Grand Prix, the CDI3* Freestyle to Music presented by Helgstrand Dressage also fell prey to Hans Peter Minderhoud and Glock’s Casper (Westpoint out of Lindalie keur pref prest by Goodtimes). Hans Peter steered Casper to the winning score of 76.975%, a personal record for the bay bred by P.A.J. Rops of Breda.It has been a while since Casper made his appearance at the competitions, but this season he made his comeback in Falsterbö: “In June, he also received over 76% in the Freestyle, now we scored even better. I am happy, because it was a bit more exciting for Casper today. Yesterday’s Grand Prix took place in the second arena, so this was our first time in the big stadium with a lot of spectators. Now, I have to focus on Rotterdam and Casper gets some rest, but you will see us again later this year.”

“I was very happy with Double Dutch,” says a satisfied Thamar Zweistra. “He was focussed and our Freestyle is so much fun to ride. Our test is difficult though, the flying changes every stride are in there twice. In the first we had a small mistake, the second series was error-free. We also scored a 9 for one of our pirouttes, so I am happy!”

Enthusiastic crowd
“It felt great to ride here. The grandstands are completely filled and the audience is enthusiastic. For now, Double and I train further towards the indoor season. We are positive about his progress. He has become stronger and is more able to do the work. He is such a nice horse to ride in the ring. Always fully committed and never distracted by his surroundings.”

Geert Jan Raateland led his gelding Don Bravour (Painted Black out of Odette elite pref prest D-OC by Chronos, bred by W.J.M. van Beek of Schaijk) to place three. This full brother to the KWPN-approved stallion Bon Bravour, scored 73.950%. Patrick van der Meer entered the arena with the KWPN-approved Chinook (Vivaldi out of Sarita elite pref prest D-OC s.Havidoff, bred by family Andeweg of Randwyk). This full brother to Desperado achieved 73.150% and a fourth place. Jean-Rene Luijmes and Aswin (Sandreo out of Utilinda prest by Jazz, bred by G. Gijsbers of Loosbroek) completed the top 5 with 72.375%.