You can now bid on the foals in the first collection of the KWPN Online Foal Auction! 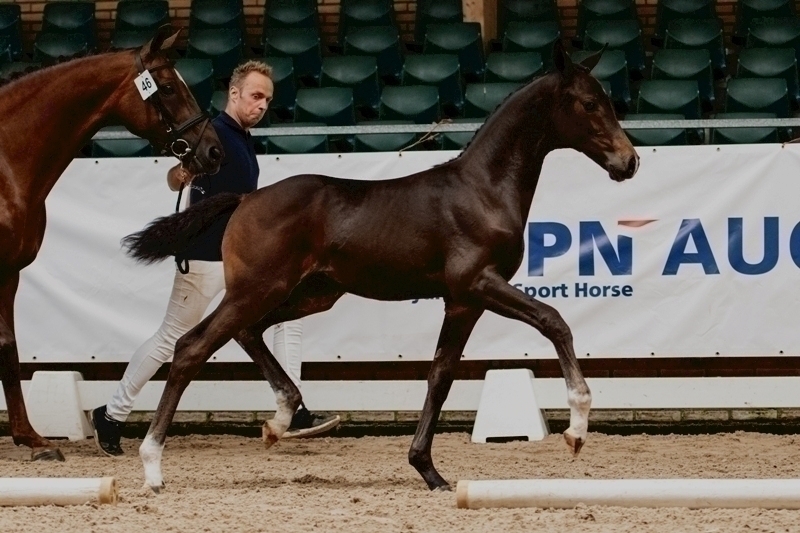 Starting today through Monday 12 augustus 8.00 p.m. you can make your bids on your favorite foals in the KWPN Online Foal Auction. A total of 26 foals will go under the hammer, thirteen dressage and thirteen jumping foals. Are you looking for new talent? Then bid now!

The collection consists of foals that descend from, among others, the proven jumping stallions Harley VDL and Van Gogh, but also from the young, talented stallions Highway M TN, Glenfiddich VDL, Cantona TN and the champion stallion Kannan Jr. We also see many well-known names in the pedigrees of the dressage foals such as Desperado, Imposantos, Expression, Ferdinand, All At Once and Ferdeaux. You can view the entire collection with photos and videos on the auction website www.kwpn.auction.

Interesting dams
But it is not only the sires that impress. The majority of the foals also come from interesting dams or proven dam lines. The All at Once daughter Ollrene SK, in example, comes from the Z2 mare Alpha Irene and Obsession (s.Expression) is a half-brother of the Small Tour horse Zarah and the ZZ-Light horse Charming. The grandmother of Ferdinand-son Ofrin is Ciska II (by Samba Hit II) who competed at ZZ-Zwaar and is the half-sister of the Prix St. Georges horse Ferdinand (by Vivaldi). Olaf's (s.Imposantos) dam is a half-sister of the international Prix St. Georges horse Elmero (s.Tango) and the Grand Prix mare Utah is the great granddam of Ohio VZ (s.Jersey).

Foals have been inspected and assessed
All these foals were inspected by a veterinarian during the photo and video days and assessed by a KWPN inspector. You can request information about these assessments from Rianka Hazeleger via salespromotion@kwpn.nl or telephone number: +31 341-255 511. Registering as a bidder is easy and for free and can be done on the auction website www.kwpn.auction.