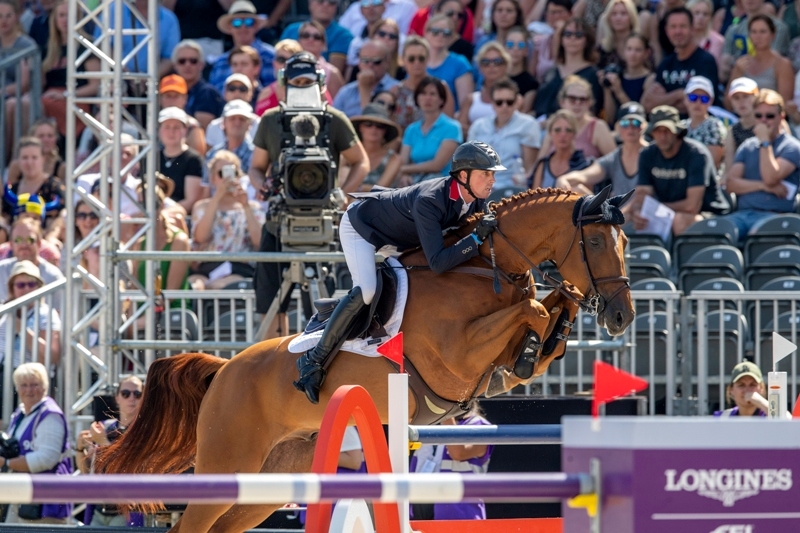 The European championships were held in Rotterdam and wow, how exciting it was! The tension was on in the jumping arena up to the last rider. Up to the second-to-last jump Ben Maher went for gold, but there he got his first mistake on this European Championship with Explosion W (by Chacco-Blue) and that meant silver instead of gold for this phenomenal duo.

Explosion’s breeder Willy Wijnen was present every day in Rotterdam to encourage his formidable breeding product Explosion W (Chacco-Blue out of Uarina ster sport-spr perst of Baloubet du Rouet) live. After three rounds, Maher was proudly in the lead, but after the first round of the finals,  the difference with his closest competitor was just under four penalty points. One mistake and the gold went to Martin Fuchs with the Cornet Obolensky son Clooney, and that happened. Yet, it does not detract from the excellent impression that Explosion W has made on everyone there. "As Ben Maher himself always says: it's like Explosion W comes from another planet," laughs Willy Wijnen. “It is great to experience this as a breeder. We sold him to Ben as a seven-year-old, because I always had a firm faith in him and we only wanted to sell him to a real top rider. Mariëlle van de Veer produced him to 1.40m level and I remember that in 2013 I said in an interview that he will be a horse for Tokyo. I still have that hope, but this European silver is also absolutely amazing. It's just hard to comprehend, I’m chuffed to bits!"

Ben Maher, too, speaks exclusively in superlatives about Explosion W, which he rides for the owner Poden Farms. “Explosion W is an exceptionally good horse and extremely athletic in everything. He really deserved to win gold here but unfortunately I just made one canter stride too much in the line to the next-to-last obstacle. I blame myself for that, because Explosion gave everything to jump clear again here”, says the Brit about the 10-year-old gelding, whose dam competed internationally with Leon Thijssen. “I am incredibly happy that I can continue to ride this horse thanks to the Poden Farms because it is an abnormally good jumping horse with a top attitude. I am super happy to ride the - in my opinion - best jumper in the world. ”As the best Dutchman, Marc Houtzager finished in eighth with his great jumper Sterrehof's Calimero (Quidam de Revel from Maifa ster perst by Libero H, breeder Stal Horn from Oud Ootmarsum). His ride was disrupted by two streakers, but that did not prevent the experienced duo from leaving all rails up.