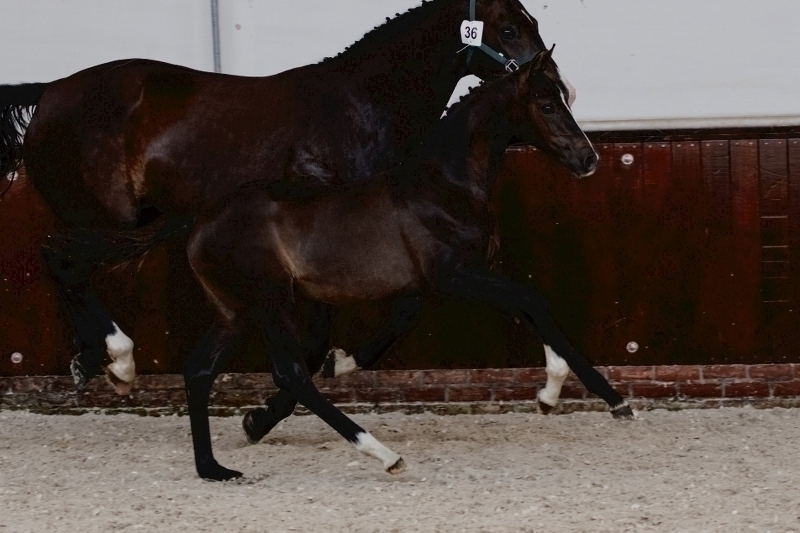 From today bidding for foals in the third KWPN Online Auction is possible. In total, 37 foals, 24 jumping and 13 dressage foals are searching for a new owner. Bids can be made till Monday 9 September 8 pm CET. New in this auction is that for the first time an embryo is being auctioned! The dam is the half-sister of Explosion W (s.Chacco-Blue), the silver medalist of the European Championship in Rotterdam two weeks ago. And none other than Chacco-Blue signs also for the paternity of this foal.

Two time medal winner Explosion W
Explosion W jumped the one impressive lap after another during the European Championship in Rotterdam under Ben Maher. With fantastic technique, unlimited scope and a great canter, the pair managed to secure team bronze for Great Britain. On the final day, with only a small difference with the gold medal, they won a wonderful individual silver. Explosion W's dam, the Baloubet Du Rouet daughter Uarina, jumped under her sports name Untouchable at international 1.55m level ridden by Leon Thijssen. In addition to Explosion W, she also produced the international 1.45m horse Boncetto W (by Concetto Famos). Her daughter Zarina III (s.Heartbreaker) is the dam of the unique embryo that will now be auctioned digitally. This mare already had her son, the stallion Liamant W (by Diamond De Semilly), selected for performance testing at the KWPN Stallion Show this year and finished third in the championship ring. Later this year this stallion was approved for breeding by Zangersheide. Explosion W is very closely related to the embryo in this auction, both are by Chacco-Blue, who had no less than four offspring in the individual finals of the European Championships.

The new Verdades
The Olympic Grand Prix dressage horse Verdades from the American Laura Graves has been competing at the highest level for years. This horse by Florett As and as dam's sire the harness horse stallion Goya is a special appearance in the dressage ring. In this KWPN Online Foal Auction you may be buying the new Verdades! The sire of Orades De Jeu is the harness horse stallion Eebert (s.Atleet) and the dam is the mare Helaine de Jeu (s.Don Tango B). Out of this dam line descend the ZZ-Licht horse Cando S. (by Tolando), the Small Tour horse Walther (by Rousseau) and several Z1 / Z2 dressage horses.

Sport in damline
Incognito daughter Olivia is a half sister of the international Inter I horse Andreo (by Sandreo) and her mother is a half-sister of the small tour hrose Balloriena (by Johnson). Big Tour horse Coco-Chanel comes also from this damline. The young and promising Taminiau is the sire of Olily. Dam ran Z1 level herself and already gave birth to a ZZ licht dressage horse and several Z1/Z2/Small Tour horses can be found in this damline.

Foals have been inspected and assessed
View the collection, register as a bidder and bid on your favourite! The auction closes Monday 9 September from 8 p.m. All these foals were inspected by a veterinarian during the photo and video days and assessed by a KWPN inspector. You can request information about these assessments from Rianka Hazeleger via salespromotion@kwpn.nl or telephone number: 0341-255 511.