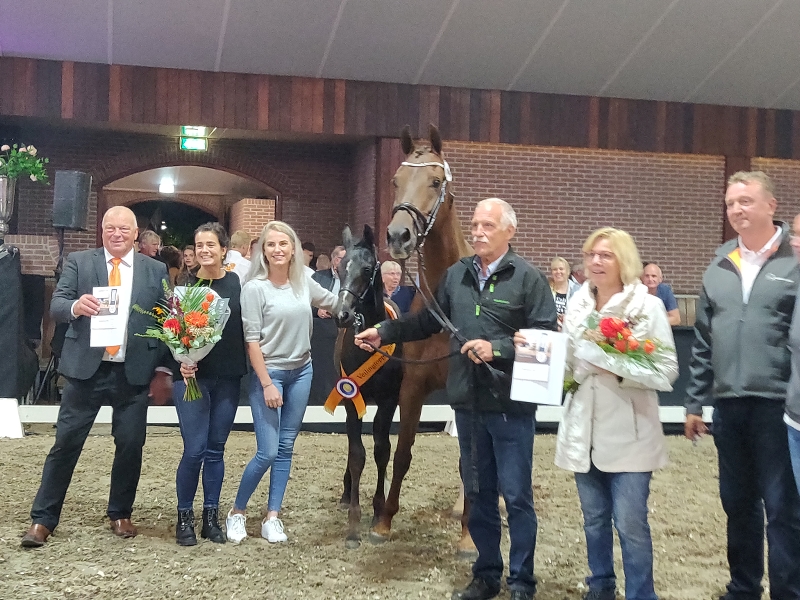 The 17th edition of the Dutch Top Foals auction was a success. The organization are pleased with the auction, and – contrary to the current trend - our average price increased compared to last year. The three top sellers: Kees fan Raepshille, Orson JZ and Poker-Boy Paulowna Z.

In a full house, 62 foals were sold on Wednesday September 4th. The venue of the Nieuwe Heuvel in Lunteren had been decorated and prepared in style and the new lay-out, that featured the VIP-lounge at both sides, was a hit. Even though it was a weekday, the audience stayed till the end. Last weeks, it became evident that it is currently a buyers’ market and that had not escaped the watchful eye of our foreign customer base. The phone was ringing off the hook. Orson JZ (v.Desperado uit Elsarina elite prok IBOP-dres v.Jazz) remains in the Netherlands for 20.000 euro. Making his breeder Jan Zeewuster a happy man.

As is tradition, the auction was opened with two items for charity. This year, a beautiful bronze sculpture and Janet Visser’s painting ‘Horse in Blue’ went under the hammer. Stichting KiKa (Children Cancer free foundation) will receive a cheque of 6.800 euro!

Right at the beginning of the evening, On the Flow (Glock’s Toto Jr x Charmeur) set the tone. This colt out of the lineage of Special D was bred by F.G.J. Sturkenboom and leaves his stables for 19.000 euro. Followed directly by Poker-Boy Paulowna Z (Poker de Mariposa) as the topseller of the jumper foals: 9.500 euro. The colt of Ans Keppel is bred out of the half-sister of Carrera VDL and thus closely related to Tinka’s Boy. In the break, the two stallions King van het Haarbosch (Spielberg) and Lay Out (Verdi) were honoured for their approval at the KWPN this spring.

Fontaine TN impresses
The young promise Fontaine TN impressed through his three quality foals in this collection. His son Onassis GBL (ds.Ferro, bred by Gebr. Lohuis) yielded 16.000 euro. Via the telephone a rider from the United States invested in Ofantaine (ds.Apache). The offspring of Glock’s Toto Jr are still a hot commodity. Odessa Karla (ds.Vivaldi) was sold for 15.000 euro. This filly out of a Prix St George mare ticks all the boxes. Odiva Corieta Texel (ds.Jazz) also raised hands, auctioneer Johan Wilmink dropped his hammer at 11.000 euro.

Kees vd Raepshill (v.Tjebbe 500) went viral on social media and received bids from all over the world: this spectacular colt was sold for 29.000 euro. No doubt, we will see him impress the dressage ring in a few years. One More Dream (Sezuan) and Officer Fitch US (Furst Romancier) were one of the last foals to enter the arena. The Furst Romancier out of the half-sister to approved stallion Painted Black trotted to 17.000 euro. The young Sezuan was also popular, there were 5 bidders by phone. Eventually, one of them won the auction: for 18.000 euro this filly may travel to the United States!

Foreign interest
The second highest jumper, Octavus Eickenrode, may also make the trip to the USA. This colt by Harley VDL, bred by Johan and Aline van der Waaij of Eickenrode Sporthorses) descends from a solid lineage in which sports is deeply embedded. Like his brothers, he will have a career across the borders. The Cornet Obolensky-son Canzaro Z (ds. Balougran Z, bred by Bert Vink of IJsselstein), Oquento HSH (Quite Capitol x Cento bred by H. Smalbraak) and Oceana van ’t Kalmthout (Balou du Rouet Z x Goldfever, bred by Marcel Oomen)will leave the Netherlands too: they are expected in Ireland. Orlando (Blue Hors Kingston x Johnson, bred by: S.P. de Lange, Schagerburg) leaves for Kuwait, while a buyer from Taiwan invested in Okaronia (Expression x Glock’s Toto Jr, bred by Van Norel).

Increase
As a result, the average price was 8.900 euro. An increase compared to last year, even though we had fewer outliers. Chairman Joop van Wessel looks back on a successful evening: “We have had a top auction, with lot of interest from both within and beyond the national borders. We were confident in our collection and it is great to see the trust of the breeders and the buyers. We had a full house and a sold-out VIP-lounge, lots of buyers and spectators and a vibrant atmosphere. Fantastic!”