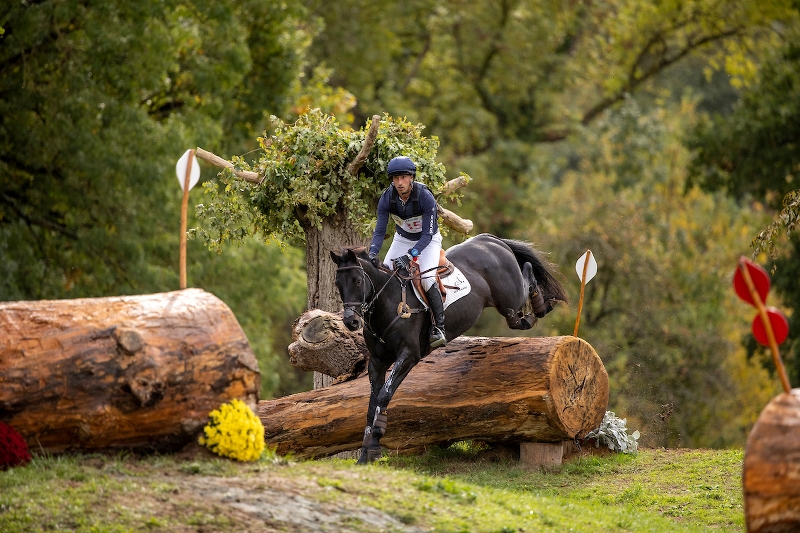 On the last day of the World Championship for Young Eventing Horses in France the rankings changed considerably. On the bad footing in the main stadium a lot of faults were made in the show jumping. With the seven-year-olds the Indoctro-son Happy Boy even made it from the eighth place to a gold medal with his clear round. The six-year-old Inchello DHI dropped from gold to bronze due to one fault. Thanks to these medals the KWPN ended on a bronze position in the studbook placings.

The from New Zealand originating Tim Price rode Happy Boy (Indoctro x Odermus R, breeder A. Rijpma) on Saturday through a good cross country and took an eighth position with this performance. In de show jumping he was one of the few who stayed clear, which brought him to a gold medal.

The striking chestnut Halenza (Dutch Design x No Ski, breeder Stud van Bommel) had one fault with the British Heidi Coy, but still got from the 19th position to the 10th. With this result this was besides Happy Boy and Inchello DHI the third horse to count in the studbook competition. The gold in this competition went to Selle Francais whom just stayed ahead of the Irish Sport Horse Studbook. The KWPN came in third with a minimum difference.

The bay Inchello DHI (Chello III x Montreal, breeder J. Kazemier) was in the lead with his rider Yasmin Sanderson since the dressage test. Unfortunately the combination got a fault in the show jumping which made them fall back to bronze. De rider has a Norwegian passport but was born and raised in England. “Inchello is my only horse and I am really happy with him. He has good gates, jumps nicely and has a super attitude. I have ridden offspring of Chello III before and I was crazy about that one too. When I saw this horse as a four-year-old with Heidi and Ian Woodhead, who found him in the Netherlands, I was sold in an instant”, tells the 22-year-old rider.

With the seven-year-old horses there was a setback for Tim Lips. After the cross country he was in a fifth position with Herby (Zirocco Blue  VDL x Ferro, breeder W.H. van Hoof). Unfortunately the chestnut wasn’t a 100% fit with the vet check on Sunday morning. Striking was also the decision of the German riders whom withdrew their seven-year-old horses for the show jumping in the afternoon. Due to the rain they felt it was irresponsible to jump on the very bad footing of the main stadium.

All results can be found on www.worldsporttiming.com