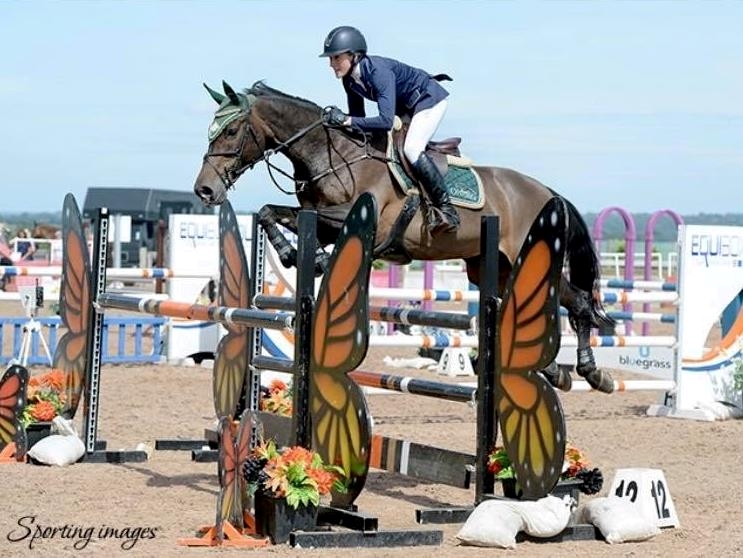 During the tracing of the international results of the KWPN’ers we ran into a very special mare. With her 27-year-old this daughter of Elmero B, Karmijn, jumped to the win three times three weeks ago on the Winter Classic Premier Show in Liverpool.

This special mare was born on May 24th in 1992 at her breeder J.G. van Hesteren in the dutch Egmond. Still in the Netherlands she brought a son in 1998 and she jumped up to 1.30m level with which she earned her sports predicate. Her son, Romijn (by Inspekteur), performed M1-dressage and B-jumping in pony classes and has passed away. However his mother is still in top condition and still jumps on international 1m15/1m20 level in Ireland.

Performances
With her rider, Suzanne Posnett, she still jumps to the win regularly. Just like a few weekends ago at the Aintree Winter Classic Premier Show, where Karmijn won three times and was second once. Suzanne got Karmijn, or as she calls her, Minnie through her friend Michael Cave, who was based in Holland at that time when Karmijn was 13 years old. From then on Karmijn has taught her rider a lot and brought her to a couple of wins in the ladies 1* classes in Auvers in 2016, a fourth place in the 1* Grand Prix in Chepstow this year and in October she had a great Aintree Winter Classic Show. Suzanne tells us that Karmijn loves going to shows and always performs extremely consistent, with the attitude of a fighter.

Future plans
Right now Suzanne works Karmijn 6 days a week and she does exactly the same work as the other horses in the yard. However she does realize her age and therefore considers Karmijn the boss by working around her condition. Despite her age she knows her way to the field and this little mare will go there on her own pace. “Future plans are to keep her happy, healthy and jumping until she decides she has done enough” says Suzanne about her once in a lifetime horse, Karmijn.