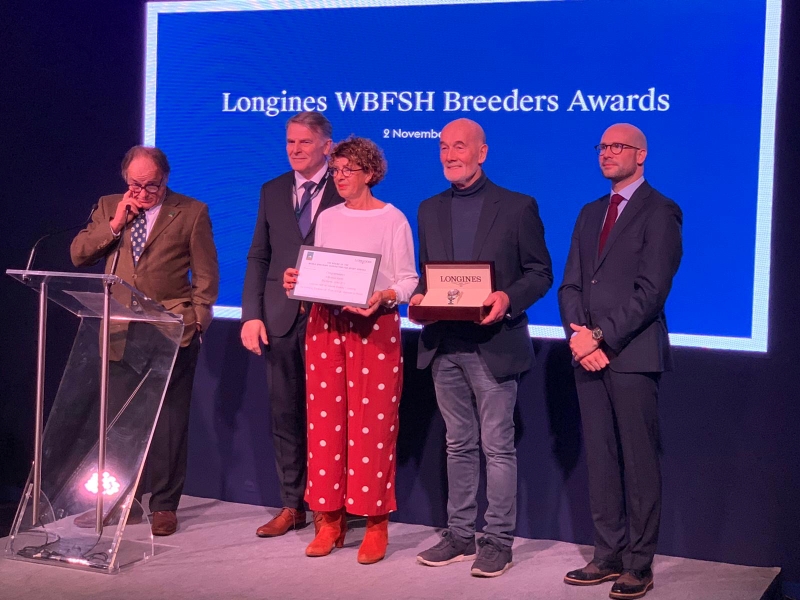 The KWPN is at the top of the WBFSH studbook rankings for both the jumping and dressage horses. The Chacco Blue son Explosion W, bred by Willy Wijnen, is in the lead in the individual ranking for 2019. That is why the breeder was rewarded with a Longines watch in Lyon this weekend.

Explosion W (Chacco Blue out of Uarina ster prest sport-spr by Baloubet du Rouet) had numerous international successes this year under the saddle of Ben Maher. The gelding was third in the Grand Prix of Aachen and won silver at the European Championships in Rotterdam. Willy Wijnen is the breeder of Explosion W. In August he was also honored with the title KWPN Breeder of the Year.

"For starters, I thought it was great that the chairman of the general board, Andries van Daalen, was present during the ceremony," says Willy enthusiastically. “It was very well organized and I really enjoyed every nit of it. It was a great honor to be there, it is fabulous to experience this as a breeder. My sons flew in for the event and my wife Betsie was there too, so we had a fantastic celebration afterwards. You can retell what it was like at home, but it’s much more fun to experience this together with your children. ”

The breeder owned Explosion W up to the age of seven and had Mariëlle de Veer produce him. “He had lots of character and was not the easiest in the beginning. After he was gelded, he became a bit more relaxed. Being a stallion got in his way. The horses from this bloodline are not always simple, but they all have a certain drive. Explosion is a top athlete, he wants to get to the other side, and he’s got the scope to get over. His body never gets in his way, he can do it all. We follow him closely. We have been to Aachen and we have seen him jump in Rotterdam all three days. In two weeks we are going to Prague for the final of the Global Champions Tour. I love seeing him regularly and I have a very good contact with Ben Maher. Yesterday I had him on the line, and I said: “You already have six Longines watches, now I’ve got mine!”, Willy concludes.