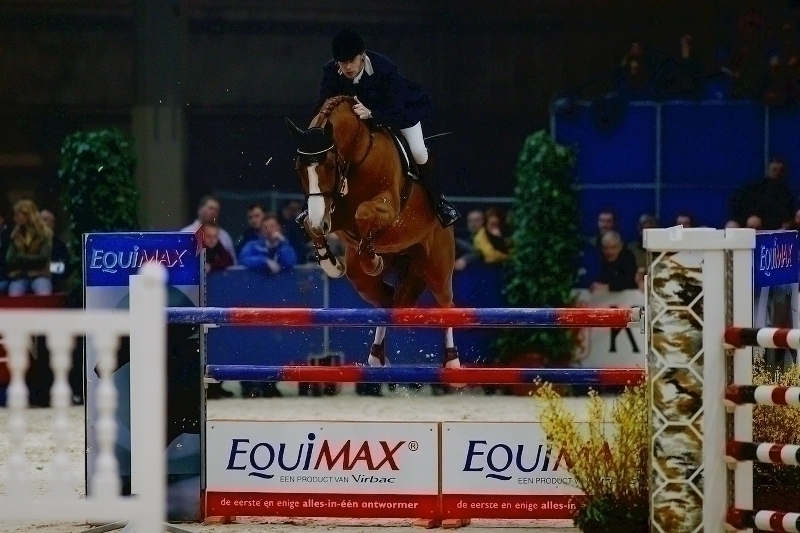 Tangelo van de Zuuthoeve
Tangelo van de Zuuthoeve (s.Narcos II) was born with the family Vets in 1996. He was bred out of the Ladanum xx daughter Olympia van de Krekebeke. With Roelof Bril he earned many good international placings. Such as a third place in the Grand Prix of Wenen and a third place in the Grand Prix of Birmingham, both on 1.60m level. He also proved his value in breeding and was named keur at the KWPN in 2010. In 2018 he was named preferent due to his impressive performing offspring.

Offspring
Tangelo his offspring does extremely well in show jumping and promote their father by doing so. One of Tangelo’s first successful offspring was Vigaro. This stallion was from his first year of foals, born in 2002, and approved at the KWPN in 2007. Vigaro began his international career with Roelof Bril and performed up to 1.60m level with him and did the same with Gerco Schröder. Nowadays, the almost 18-year-old Vigaro is still in the sport performing on 1.40m level with the 16-year-old German Fiete Constantin Krebs. Vigaro has two approved sons at the KWPN, Dortmund HS and El Salvador. With Vigaro in the second generation via El Salvador, there are also two KWPN approved stallions. Also Tangelo van de Zuuthoeve son Darry Lou, bred by Roelof Bril, is performing good with Beezie Madden. In 2017 this stallion was recognized by the KWPN. He recently won the Rolex Grand Prix in Spruce Meadows, Calgary. Just like his father, Darry Lou is in the running for a ‘Horse of the Year’ title, only Darry Lou does this in America where the election runs until January 2nd. Besides these two successful sons, there are many more successes and talents among Tangelo’s offspring. Such as D’Angelo (1.60m), Van Schijndel’s Amberlina (1.60m), Expert (1.60m), Billy Angelo (1.60m), Enorm B (1.60m) and many more top horses. Not only Tangelo’s older offspring, but also the young generation does a great job of promoting their father. His son Liverpool became the champion of the KWPN Stallion selection during the KWPN Stallion Show in 2019. Besides this Tangelo has four direct sons approved at the KWPN and with six KWPN approved stallions we see him in the second generation.