Jazz, the king of the dressage breeding has passed away 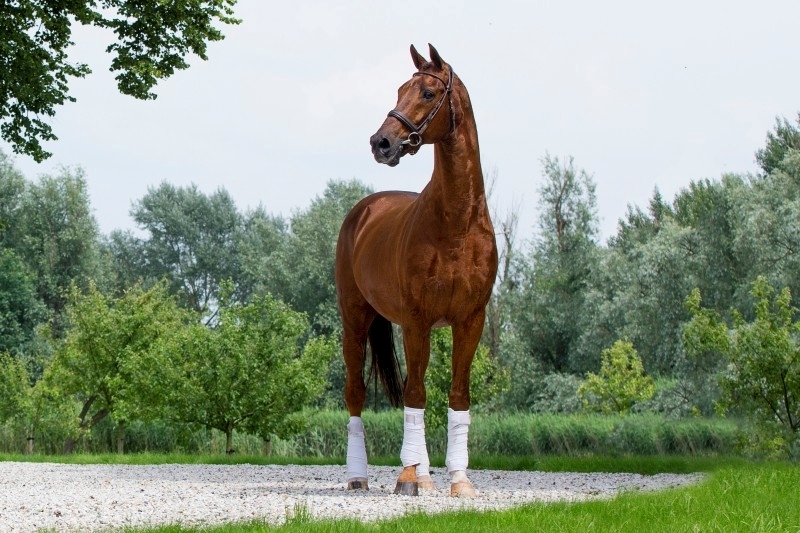 Broer Jazz has passed away. The king of the dressage breeding has been euthanized at Stoeterij Broere at the age of 29 years old. If there was one stallion capable of making people talk, it was this Cocktail son. The preferent stallion was praised and reviled. Still one thing is for sure: no stallion has had so much influence in breeding in the Netherlands as Jazz.

Jazz is from the legendary breeding of Huub and Tiny van Helvoirt. The breeders out of Rosmalen gave the cheeky colt the name Jacob, named after the well-known journalist and photographer Jacob Melissen.

You didn’t forget him
When Jazz did his performance test in 1994, we weren’t familiar with specialized sport horse breeding yet. Jazz was registered with unsatisfactory grades in jumping. The current dressage horse breeding is unimaginable without Jazz. “He stood out because of his amazing forehand, high legs, whithers/shoulders and his bend hind leg. And of course he had an amazing trot. And that he has Cocktail as his sire, was a plus” says Jaap Werners, who gave him his breeding license ten years ago. “In the terminology of then, Jazz wasn’t a true sire. He was narrow and barely met the qualifications for a breeding stallion in the old fashioned philosophy. But he had so much charisma, ‘presence’ as they say it in England. You didn’t forget him.”

Torch shows
The sensitive stallion also knew his opponents. Jazz would be a nice horse for ‘on the rope’, but the big sport, that wouldn’t be reachable. Tineke Bartels: “Nowadays we don’t find it a problem anymore if an amazing horse is spooky at times, like Parzival was too. I had to do a lot of work to earn understanding for that. People in that time weren’t used to the positive side of a sensitive horse. We got a lot of negative publicity. That is when I started focusing on the ballet show and the torch show. Just to prove there isn’t an ounce of evil in there and that he is an amazing animal”, says the Olympic rider in IDS.

Sire of big size
“They are all pretty, but Jazz was only taken serious as a top sire when he gave the one after the other Grand Prix horse”, Bartels said back then. From the KWPN registered offspring, 125 were started in the Netherlands and abroad on Grand Prix level, 195 offspring reached the Small Tour level.

Breeding stallion
No stallion had as much influence on the dressage breeding as Jazz. He was on top of the WBFSH-ranking for years. In the Netherlands, the preferent stallion knew over 3.100 offspring. Thirteen of his direct offspring was approved, from which Johnson is preferent, and Olivi, Wynton and Westpoint were named keur. 43 KWPN stallions carry the Jazz blood in the second generation. At the mare inspections two thirds of this daughters earned the conformation predicate. Jazz gave 99 preferent mares and 62 performance mares.

His time far ahead
Extra special is that these numbers are still growing, because 25 years after his approval, there is still being bred with Jazz and that proves that he is way ahead of his time. “With pain in the heart, but especially grateful for what he has meant  to us and for the dressage sport and breeding, we have said goodbye to the king of our stable last week: Broere Jazz. Broere Jazz became 29 years old, we will miss him”, Stoeterij Broere informs.