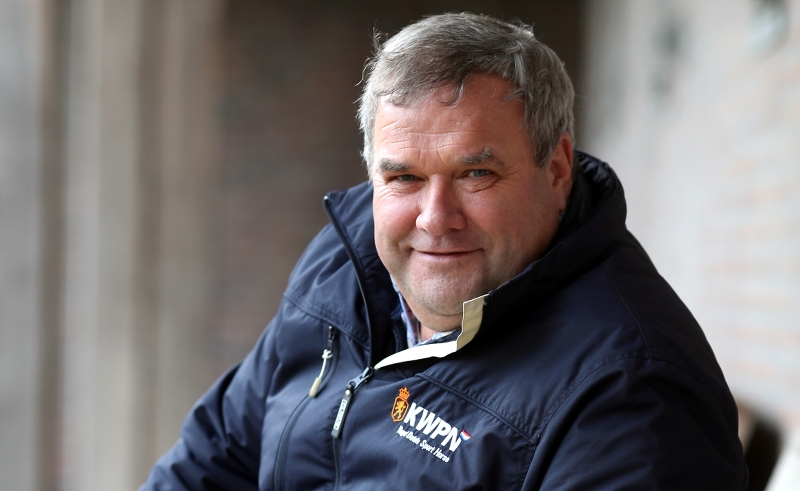 We recently received the sad news about the sudden passing of our very much appreciated colleague Arnold Kootstra (57).

After a career as show jumping rider, Arnold Kootstra started working at Stal Roelofs in Den Ham in 1991. During the biggest part of his employment of 19 years there, he was the company leader. Together with founder Herman Roelofs he helped the sport and breeding to the best horses with the Roelofs-philosophy: with the strong selection on jumping quality, proven pedigrees, character, health and a generous amount of blood, they bred modern show jumpers with the help of Abgar xx and Joost. In that time several Roelofs-stallions were approved at the KWPN, such as Namelus R (s.Concorde), Mermus R (s.Burggraaf) and Odermus R (s.Calido I). Champion stallion Arthos R was Arnold’s favorite, sire Namelus R as well as his dam S.Adermie 2 were bred by Stal Roelofs. Arnold was put in the spotlight in 2010 together with Herman Roelofs, when Stal Roelofs’ breeding was rewarded with the title KWPN Breeder of the Year jumping.

After a short period at Stal Eurocommerce, Arnold joined the KWPN on August 1st 2012 as inspector jumping. With the addition of Arnold, the KWPN could take the next step in specialization. Besides his function as mare-inspector and regional-inspector for Limburg, Noord Brabant, Drenthe, Zuid-Holland and Gelderland, he took on some national tasks such as judging at tests and young horse competitions and scoring foals of the first crop of approved stallions. For the stallion selection committee he searched the dam lines of the presented jumper stallions. In the past month he viewed quite some dams of second round viewing stallions as well in the Netherlands as abroad. Two days before his passing, he discussed his findings with the committee. He was a walking database, he knew all good dam line by heart. Arnold visited hundreds of breeders yearly, also for chipping foals. He made long days, but did this out of passion for breeding, because his work was his hobby. Arnold was a welcome guest at the kitchen table, where he advised many breeders in their stallion choice, but also a welcome conversation partner regarding breeding philosophy.

By many people Arnold was characterized as a loyal, amiable person with a clear vision. A strong but modest personality with an intense kind character. At the office and in the organization Arnold was a loved colleague that you could always rely on. He heard and responded to every request, nothing was too much for him: he was always there for someone else. With birthdays, sickness or other personal matters you could count on a message of Arnold. His passing comes as a big shock to all of us. The KWPN loses a very experienced and skilled inspector, we lose an amazing colleague. We will miss him a lot.

We wish Arnolds wife Elise, family and friends all the strength in dealing with this enormous loss.