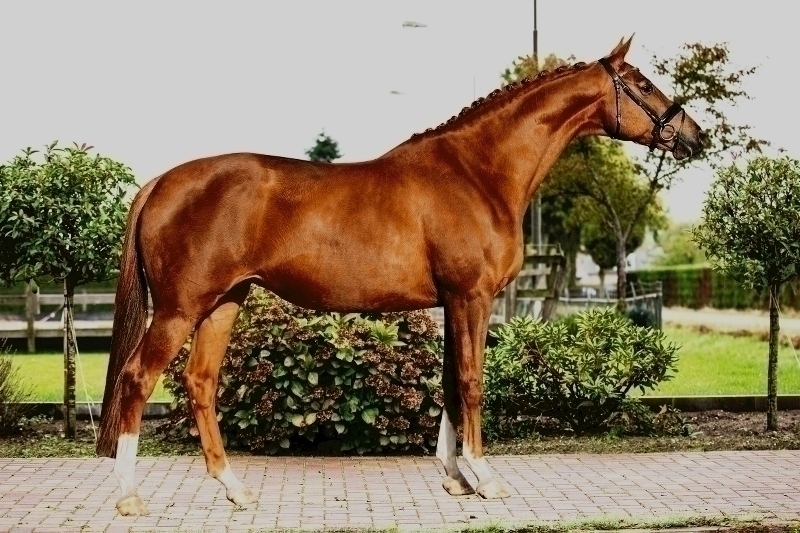 In the Online Foal Auctions there have been several broodmares sold in the past couple of years and this has not gone unnoticed by the breeders. Regularly the questions was asked if it was possible to set up an online auction for more broodmares. This is how the KWPN Online Broodmare & Embryo Auction was born.

Genetically interesting jumping mares
All broodmares are in foal to an interesting stallion and are genetically interesting themselves as well. Like the 1.40m mare De Meta (s.Lord Z), that is a part of the collection. She comes from the dam line of the legendary Kannan and is in foal to the Chacco-Blue son Chacoon Blue. Unaniem-daughter Eclaire has three 1.60m stallions in a row in her pedigree and comes from the direct dam line of the KWPN-approved Grand Slam VDL and the KWPN recognized Dallas VDL. This year she expects a foal of Cornet Obolensky. Halita ES (s.Tornesch) is a half-sister to the Grand Prix horse Aquila (s.Ovidius). Besides this the international 1.50m horse Clintissima (s.Clinton), the international 1.45m horse Graniet ES (s.Flamenco Desemilly) and the KWPN-approved stallion Jubel ES (s.Harley) half-brothers and sisters. Halita ES is in foal to Chacfly.

Proven dressage blood
With the dressage broodmares elite mare Hadievola (s.Charmeur) is part of the collection, she comes from the direct dam line of Ampère and is in foal to championship stallion Le Formidable. That show jumping influences can improve dressage breeding is a known fact, but in only a few pedigrees the result of this is as visible as in that of this Ja D’Orlandaise. She is the half-sister to Uzzo (s.Lancet) who was of value to the Dutch dressage team. Besides Uzzo and Ja D’Orlandaise, dam Orlandaise gave two 1.60m show jumpers. This mare is in foal to Olympic stallion Painted Black. The Small Tour mare Citrien Sollenburg has proven herself in the dressage arena. This Johnson-daughter is in foal to champion producer Vitalis.

Embryo out of the full sister to Johnson
Besides interesting broodmares there have also been added some embryos to this collection, and they are very special! Out of the full sister to GLOCK’s Johnson TN, Djo ter Kwincke, a foal from Zonik is expected. Renate-Utopia, the dam of no one less than Vivaldi, is combined with championship stallion Le Formidable. Valverde is the sire of the unborn foal out of a mare that represents three Grand Prix stallions in a row in her pedigree. Two strong dam lines come together in the unborn foal of Comme Il Faut out of the direct dam line of Bubalu VDL. The fifth and last embryo is out of a mare that has already given two 1.60m stallions and is combined with Grand Prix producer For Pleasure.

Good mares are the starting point
The progressive breeder and the new generation of breeders, realizes that they have to start with good mares. The costs to raise a horse and have them trained are high, but whether you have a horse with normal quality in training or a horse with better quality, it doesn’t differ in costs. Besides this there are several KWPN-breeders that breed with proven dam lines but want to reduce due to their age or just because they have to many horses. How great is it if we can help these breeders with their sales”, Wim Versteeg enthusiastically explains the new initiative.

View the collection online
The collection of this new online auction is online on the auction website www.kwpn.auction. There is also the possibility to check out the collection in the stand of the KWPN and the KWPN Select Sale. The KWPN Sales team is happy to answer all the questions regarding the collection and/or sales in general.