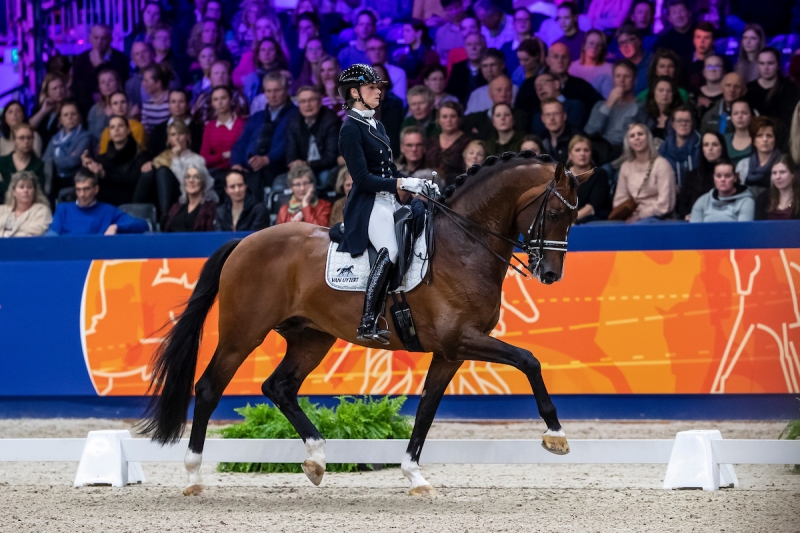 “I know who is at the top for me”, Mariëtte Sanders – van Gansewinkel decides in her explanation about the winning kür of Geniaal. The Vivaldi-son scored 78,57% with Dinja van Liere, and this was the highest score in the VHO Trophy with four competitors.

“A very complete horse that is furthest in the training of the four horses. Geniaal shows beautiful pirouettes and has a nice posture in the trot. He does the changes with a lot of technique in his front legs”, the jury comments on the nine-year-old Geniaal (Vivaldi x Biotop), bred by family Traa.

Franklin stands out in extensions
The second place was for Ferguson (Floriscount x Crusador, bred by Erika Luetjen). The stallion stands out with a lot of length in his extensions, however the pirouettes could be smaller. Total: 76,07%.

Hermès before Franklin
Hermès (Easy Game x Flemmingh, bred by G. Gijsbers) scored 73,3% with Dinja van Liere and with that he stayed ahead of the especially out of Denmark coming Franklin (Ampère x Ferro, bred by Stal Gasaya and Veehandel Musterd), who showed a lot of quality in his gates, but also had some tension with Bettina Jäger Jensen.