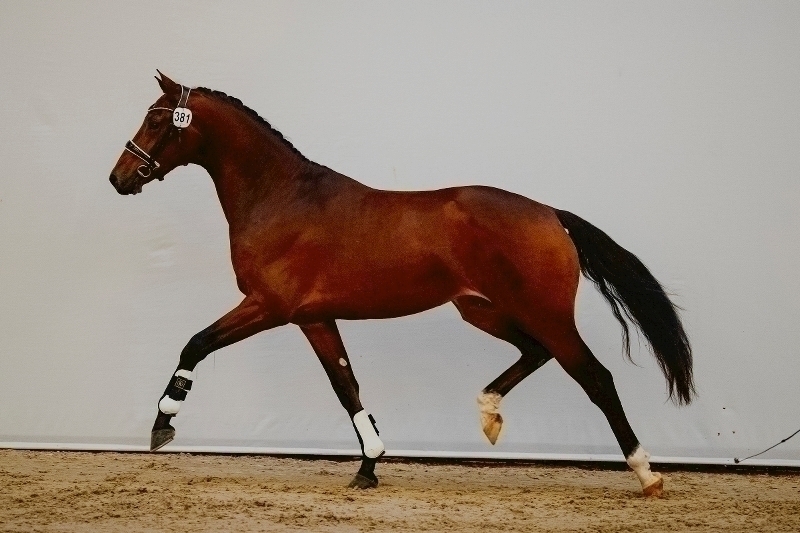 The ambiance was good on Friday morning, a lot of stallions received applause with their performance. Also the stallions of the KWPN Select Sale were liked. Five of the stallions got an invitation for the performance test. On Saturday four more KSS-stallions were selected.

Mafkees (Ferdinand x United) comes from the dam line of the Big Tour horse Bingo (s.Goodtimes), the international Inter I horse Eclectisch (s.Zenon), the Small Tour horse Winni Peg (s.Rhodium) and multiple Z1/Z2/ZZ-Licht horses. Also he knew how to make the audience applaud during his performance.

Moulijn
Also selected for the performance test is Moulijn (Glamourdale x Son de Niro). As a son of world champion Glamourdale and out of the dam line of several Grand Prix dressage horses, this Moulijn doesn’t get his talent from a stranger.

Mistral
In the pedigree of the promising with a lot of power moving Mistral, the future talent of Edward Gal, GLOCK’s Total U.S., is combined with the mare What’s Up. This daughter of Don Schufro-son Doolittle already gave the Z1 horse Isa (s.Dream Boy) and is a half-sister to the international Prix St. Georges horse Douglas IV (s.Diamond Hit). Mistral (Total US x Doolittle).

Monte Cristo and Mauro vd Watermolen
In Monte Cristo (Totilas x Metall) the blood of Totilas comes together with Metall-daugter Iresia. She is a half-sister of the German Small Tour horse Hillstone (s.Zizi Top). Also this stallion is invited for the performance test. Just like Mauro vd Watermolen (Zonik x Negro). Via his dam Hidaylia he carries the blood dressage horse producer Negro, of the Grand Prix stallion Scandic and Krack C.

Wildcards
At around 15.00 o’clock these promising stallions will be auctioned. It is possible that the collection will be extended with wildcards. Only the premium stallions are eligible for this.

More info and the collection