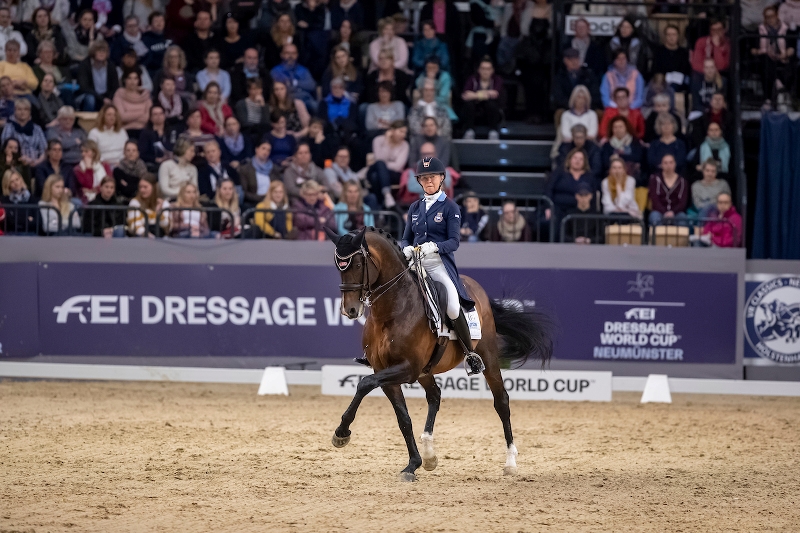 KWPN dressage and jumping stallions were very successful last weekend. Zuidenwind earned an international win and a third place at CDI3* in Wellington. Also in Wellington, Egistar was successful in the CDI4*. Impression won the Small Tour in Lier and Grandorado TN jumped to the win in the 2* Grand Prix at the Peelbergen in Kronenberg.

Wellington – Global Dressage Festival
Akane Kuroki chose the Global Dressage Festival in Wellington to make her debut with the stallion Zuidenwind (OO Seven x Jazz, breeder H. van Helvoirt). She has been riding Zuidenwind since December and two weeks ago they competed in their first international Grand Prix in Wellington. Last weekend, in their second competition together, they won the CDI3* Grand Prix with a score of 68,739%. With this performance they qualified for the Grand Prix Freestyle. In this test they earned a third place with a score of 71,490%. “It wasn’t really our day”, Akane responds. “We made too many mistakes. It was our first freestyle together, combined with the artificial light, we were both a bit tense. I rode the freestyle of my previous horse Toots, but he was much bigger than Zuidenwind. I had a lot of good parts in this test and next time he will get his own music!”

In this Grand Prix Freestyle the best score was earned by Kiichi Harada and Fairytale S (s.Reve d’Or). It was a successful day for him as he rode to a third place in the CDI4* with Egistar (Cabochon x Kaiserstern, breeder G.W. van Norel). Their freestyle earned a score of 70,745%. “This was the best weekend ever”, the Japanese rider says. “Egistar was still a bit too feisty in the freestyle which made it difficult for me to control him. The CDI4* Grand Prix Freestyle was won by Jessica Jo Tate and Faberge (s.Floristan).

International debut Impression at CDI Lier
The KWPN-approved stallion Impression (Don Schufro x Ferro, breeder M.J.C. Maat) made his international Small Tour debut at CDI Lier. Together with his rider Diederik van Silfhout he set an almost flawless test in the Prix St. George, which resulted in a score of 72,588% and a win. With this Impression continued his winning streak, as he has won multiple Small Tour competitions in the past few weeks with scores over 70%. On Saturday he performed in the Intermediate I where he scored 71,971% and ended up on a second place. With that score he qualified for the Intermediate I Freestyle in which he ended up on a second place again with a score of 77,795%.

Grandorado TN wins his first 2*-GP
Team Nijhof already had a successful weekend and Willem Greve added a beautiful performance to this: he won the 1.45m Grand Prix in Kronenberg. Eldorado van de Zeshoek his offspring was successful in the Longines Grand Prix of the CSI5* Al Shaqab. His daughter Killer Queen VDM won this class with Daniel Deusser and Eldorado-son Elektric Blue P ended up on a second place in this same class. Also in the Netherlands his offspring does well as his son, the KWPN-approved Grandorado TN (Eldorado van de Zeshoek x Carolus II, breeder D.J. Verhoeven), won the CSI2* Summa Grand Prix of the Peelbergen. Of the thirteen jump-off competitors five were able to stay clear again, Greve took the win with more than a second difference with the number two, Aniek Poels with Barry White 3 (Twisther x Animo, breeder W. Gommeren).