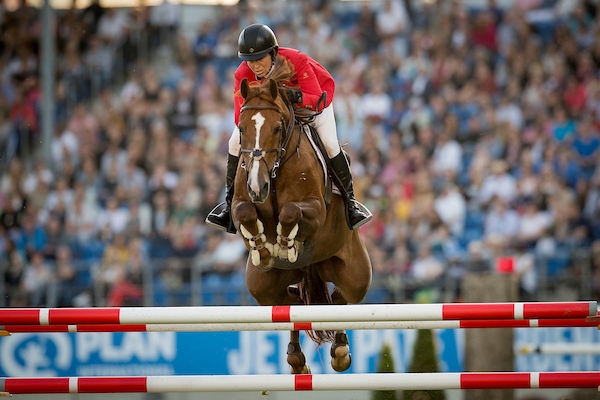 The youngest show jumpers who will make their step to the highest level this year, the Grand Prix, are from the G-year and will be nine-years-old this year. We were curious which of these horses are the ones to keep an eye on.

1.60m-level
The 563 nine-year-old jumping horses are divided over the levels as follows:

The seven Grand Prix horses are: Gilona AO (s.Zavall VDL, breeder A. Osinga), Go Four It B (s.O’Brien, breeder M.J. Nieberg), Glamour ES (s.Echo van ’t Spieveld, breeder E. Schep), Garant (s.Warrant, breeder Gebr. Bosch), Gerardo-E (s.Baltic VDL, breeder W.J.M. Erven), Jet Blue (stb.name Girocco-D, s.Zirocco Blue VDL, breeder K. Duursma) and Garezzo (s.Arezzo VDL, breeder P. Jansen). From the seven 1.60m horses, the largest part has already jumped one or more world cup qualifications. Among these Garant is no stranger, as a five-year-old he became world champion at the World Championships in Lanaken with Willem Greve. After this the gelding was sold to American top rider Beezie Madden. She is already quite successful with Garant, last year September they won the world cup qualification of New York, a month later they were fourth in the world cup qualification of Columbus, another month later they earned a sixth place in the 1.55m and this year they started of good with a fourth place in the 1.55m in Wellington. Girocco-D, who goes by Jet Blue nowadays, has moved into a stable at no one less than McLain Ward. As a four-and five-year-old this gelding already had high placings in the Blom Cup. The four horses qualified on 1.55m level are: Gaga E (s.Bustique, breeder S.J. Ebbinge), Gakhir (s.Spartacus, breeder MTS van de Donk-Kooi), Gaesbekers Glamour Girl (s.Zirocco Blue VDL, breeder Stoeterij Gaesbeek V.O.F.) and Ginger-Blue (s.Plot-Blue, breeder P. Verberne).

Most occurring sires
From the jumping horses out of the G-year that jump on 1.55m level or higher, the preferent stallion Zirocco Blue VDL is the sire of two horses. If we look at the number of offspring from of 1.40m level, the preferent stallion Eldorado van de Zeshoek takes the lead, with in total 36 offspring. Followed by Zirocco Blue VDL with 29, Cardento and Spartacus note 19 offspring, Numero Uno 16 and Ukato 14. On dam’s side we see Indoctro 26 times, Voltaire 25, Heartbreaker 19, Corland 15 and Burggraaf 14.

Well-tested mares
From the 223 mares that are active on 1.40m level and higher, 30 have the elite predicate. From these Gilona AO jumps on the highest level. As a three-year-old she did her IBOP-test in which she earned an 8,5 for her scope and attitude. Also the Ukato daughter Grand Cru VDP (breeder A. van de Pol) performs well, with Hendrik-Jan Schuttert she jumps on 1.50m level. As a three-year-old she earned 81 points for her IBOP-test with 8,5’s for her scope, technique and rideability. The 1.40m mare Glamour (s.Numero Uno, breeder J.B. Hammink) got 80 points as a three-year-old with a 9 for her technique. 81,5 points were earned by Giganta Power BH (s.A’Lee Spring Power, breeder Black Horses B.V.) as a four-year-old in her EPTM-test, currently she is jumping on 1.40m level. The 1.45m mare Guschenka (s.Namelus R, breeder J. Lamers) scored 83,5 points for her IBOP-test as a three-year-old with 9’s for her scope and technique. Girl Next Door PR (s.Bernini, breeder P. Klapdoor) scored 85 points, also with a 9 for her technique. She performs on 1.40m level now. Bacardi VDL daughter Gouvernante VDL (breeder VDL Stud) scored no less than 86,5 points for her IBOP as a three-year-old with a 9,5 for scope and a 9 for her attitude and technique. Nowadays she shows of her quality in the 1.40m.

Blom Cup
Every year the best four-, five-, six- and seven-year-old jumping horses compete against each other in the Blom Cup. In 2018 the G-year was seven. Zirocco Blue daughter Gogo Karla V (breeder H. Veenstra), won the competition with Willem Greve. Nowadays she is still ridden by Willem Greve and he has competed with her at 1.50m level multiple times. Also the number two of 2018, Gouverneur (s.Eldorado van de Zeshoek, breeder W. van ‘t Hul), is competing on 1.50m level. Just like the number three, the previously mentioned Grandorado TN, who won a silver medal at the World Championships in Lanaken that same year. In 2017 the Indoctro son Gloed (breeder J.G.M. Meyer) won the Blom Cup for the six year old horses. He is perfoming on 1.40m level now. The earlier mentioned stallion Graziano became second that year. At the World Championships in Lanaken there was a fourth place for him. Guppie VDL (s.Arezzo VDL, breeder H. Schut) was third in 2017, he is performing on 1.45m level now. Verdi son Gaucho (breeder M.G.A. Aarts) was second in the Isah Cup as a four-year-old and is currently competing on 1.40m level.