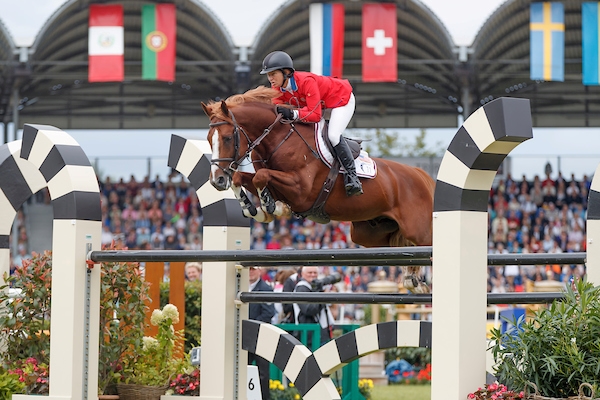 Chestnut stallion Darry Lou (Tangelo van de Zuuthoeve x Nabab de Reve, breeder R. Bril) is such a talent that Jumping legend Beezie Madden considers herself “lucky” to be her partner! Last month the Dutch Warmblood and Beezie were in majestic form as they helped Team USA win the opening round of the Longines FEI Jumping Nations Cup™ in Wellington, Florida.

Since becoming the ride of Beezie in 2017, Darry Lou has been successful all around the world. In what could be a big year for Beezie as we approach the Olympic Games, let’s take a closer look at her potential partner in Tokyo.

Darry Lou is really special
In the last three years, the pair have enjoyed success in Aachen and Mexico City as well as throughout the USA. They’ve also won huge events at Spruce Meadows in Canada. Darry Lou has been a consistent contender for sashes, rosettes and, of course, prize money. Darry Lou was awarded 2019 International Horse of the Year by the US Equestrian Federation. Beezie said: “It’s really special to be able to honour the horse, and I feel really lucky to have such a talented horse like Darry Lou.''

Bred in the Netherlands
Born in the Netherlands in 2008, he was bred by Roelof Bril. Darry Lou’s sire was Tangelo Van de Zuuthoeve – descended from the finest European Jumping stock. His dam Venus was also a successful Jumper, with plenty of blood. Combined, they created a KWPN jumping superstar with scope, looks and talent in abundance. After a brief spell in the UK, Darry Lou began his international career in Mexico, with Alberto Aldana. Their early success soon attracted interest from within the sport. For Aldana it wasn’t a difficult decision to sell to Beezie’s long-time owner and friend Abigail Wexner. Beezie has spoken before about how his laid-back attitude keeps him cool, which means she can fire him up when she needs to.

Outstanding results
Darry Lou has often stood out from the rest. The most obvious occasion was when he and Beezie won twice major events at Spruce Meadows last year. He jumped clear twice around one of the biggest courses built on the international circuit by Venezuelan course designer, Leopoldo Palacios and his assistant, Peter Grant. This meant there was no requirement for a jump off. Out of 48 riders from 22 nations, 12 riders progressed to the second round. Beezie and Darry Lou added just one-time fault to claim a major victory.