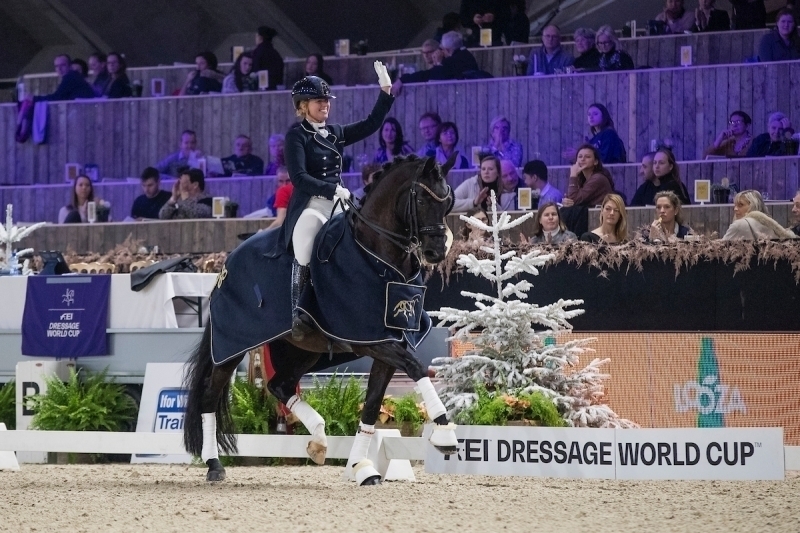 Grand Prix level
The only international Grand Prix horse of the G-year is the Charmeur-son Grand Voice (breeder A.J.P. Bouwhuis). He is being ridden by the French Marc Boblet, who has been a part of the French team before at the Olympic Games in Hong Kong. During the Grand Prix Special in Waregem past September, this combination already scored 70%. The elite mare Geneva V.D. C (s.Sir Donnerhall, breeder P. Crum) performs on Grand Prix level with Micheal Pineo in America. Totilas-son Go Legend (breeder Stal Wittenberg) has recently been started in the national Grand Prix by Marlies van Baalen. Also Gaudi Vita (s.Apache, breeder H. Broos), Guapo Y Jailoso vd Halderhoeve (s.Samba Hit II, breeder S. Blanpain), Galaxy B (s.Charmeur, breeder J.W. Bevelander) and Goldenboy Vinckenburg (s.Apache, breeder J.A.G. Sturkenboom-Vernooy) have been started in the national Grand Prix. Another striking Apache-son is Gio (breeder H. de Jong and A. Valk) of Charlotte Dujardin. During Indoor Brabant their international Grand Prix debut is planned.

Most occurring sires
The too early passed away Apache is clearly present by his offspring. From the 116 nine-year-olds that are qualified on Small Tour level or higher, he is the sire of fourteen of these horses. Two of these already performed on Grand Prix level. Jazz follows in a second place. He is named as the sire eleven times. His son Charmeur follows with ten offspring. Following Totilas with seven, Johnson with five. On dam’s side we see Jazz nine times, Krack C eight, Negro six, Ferro and Gribaldi both five and Contango and Welt Hit II both four times.

Well-tested mares
From the 34 mares that perform on Small Tour level or higher, ten have participated in the IBOP-test as a young horse. Six of these were able to score 80 points or higher. The very appealing Great Lady TC (s.Bretton Woods, breeder T.J.M. Coopmans) of Jeanine Nieuwenhuis already impressed as a four-year-old in the IBOP. She passed the test with 85,5 points including a 9 for her canter. At the moment she is ridden in the U25. Jazz-daughter Gaby (breeder H.A.J. Seiger) received 8,5’s on all aspects which earned her a total score of 85 points. Gamante D (s.Contango, breeder Dielissen and H. Dielissen vd Berg) topped this as a three-year-old. She scored 87 points with 9’s for her trot and talent as a dressage horse. With just a little less, 86,5 points, Galina (s.Bordeaux, breeder TH. and J. Deenen) passed her IBOP. For as well her trot as posture and balance she received a nine. With 80,5 points Grenaat (s.Rousseau, breeder A.M.T. Toonen Arts) also impressed as a four-year-old. Charmeur-daughter Golden Rita (breeder G.S. Bakhuisen) passed the IBOP as a three-year-old with 80 points. Except for Great Lady TC, all of these mares perform on Small Tour level.

Pavo Cup
Every year the best four-, five-, six- and seven-year-old dressage horses compete against each other in the Pavo Cup. In 2018 the G-year was six-years-old. Then the top three consisted out of: Great Lady TC, Ghandi en Gaudi Vita. All these three horses have proven themselves in the sport now. Great Lady TC also became third as a five-year-old and as a four-year-old she was second in the Pavo Cup. GLOCK’s Toto Jr. (s.Totilas, breeder J. Lamers) won with Marieke van der Putten as a five-year-old, but he hasn’t been ridden in the sport yet after this. However, we have seen him at the KWPN Stallion Show for the past two years in the closing show. In these shows he showed to have the talent for the highest level. The Bordeaux-daughter Guadeloupe-Beau was second as a five-year-old and won the Pavo Cup as a four-year-old with Kim van der Velden. She is currently qualified on ZZ-Zwaar level.