The Development of a Foal 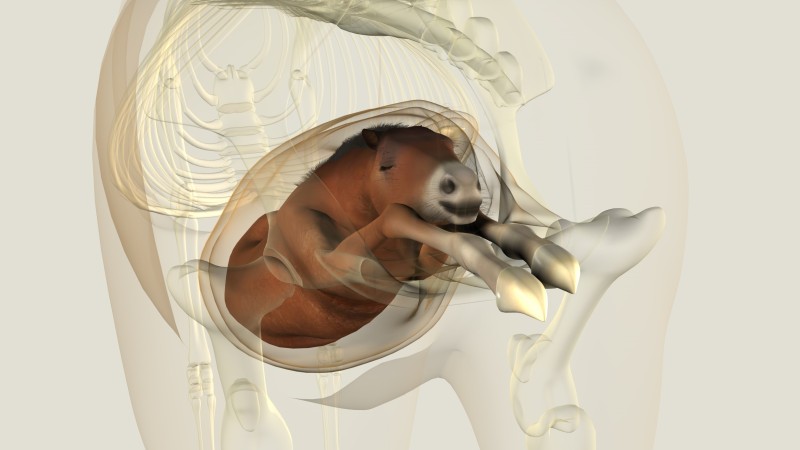 Breeding season is in full swing again. Many mares are pregnant, and breeders are looking forward to the arrival of their foals. Meanwhile, growing inside each mare is a ball of cells which will ultimately develop into a live foal. In this article, we discuss the most important events of this process.

This article was established (May 2019) in association with Prof. dr. Dr. Tom Stout, Professor of Horse Reproduction at University of Utrecht, Faculty of Veterinary Medicine, Department of Equine Science.​

A  discussion about the development of a foal begins with day zero, the moment of fertilization. Once a mare is fertilized, many cell divisions take place in stages over time. The first occurs after 48 hours, resulting in four to six cells. The second takes place after 72 hours, resulting in eight to ten cells. Between day four and day five, a morula is formed, a mass of cells which cannot yet be visibly differentiated. The following day we see a differentiation of cells between the innermost cell mass and the outermost cell layer, called a blastocyst. Around this time, the blastocyst moves from the fallopian tube to the uterus, which is important to know because the mare may now be flushed for embryo transfer. The following week the number of cells in the blastocyst increases very rapidly. On day 10, we see approximately 45,000 cells with a diameter of 2 to 3 millimeters, increasing to 15 to 20 millimeters on day 14.

Although many biological processes have taken place up to this point, many more have yet to occur. At this stage, we still have a blastocyst, the inner cells of which will ultimately form the outer layer of the embryonic sac containing the actual embryo. Propelled by squeezes from the uterus, the blastocyst migrates throughout the womb but remains intact thanks to its protective capsule. This migration is critical to the developing embryo. In this way, it makes contact with all areas of the womb, which is essential for the process of pregnancy recognition. The migration period prevents regression of the corpus luteum (Latin for "yellow body"), an essential hormone-secreting structure which stops the mare from coming into "season" and enables the uterus to support the pregnancy.

First Pregnancy Check
As mentioned, the blastocyst measures only 2 to 3 millimeters on day 10. If we were to ultrasound the mare at this point, the likelihood of visualizing it is only 70%. However, after another four or five days, the blastocyst will have developed into an approximately two-centimeter fluid-filled sphere in which the developing embryo appears as a gray-white mass. Because this fluid-filled sphere is easily visualized with ultrasound, the first pregnancy check usually takes place between day 14 and 16. This time frame is considered optimum because, beginning on day 17, the embryo undergoes the process of "fixation," attaching to the mucous membrane at the base of one of the two uterine horns.

In the event of a twin pregnancy, timely veterinary intervention prior to fixation results in a better outcome. A twin pregnancy is undesirable in horses. In two thirds of cases nature intervenes, allowing only one of the two embryos to survive. in some cases, however, both embryos develop into a viable fetus. The end result is often abortion. If abortion occurs early in the pregnancy, the breeder may not observe any changes in the mare, except that she is no longer pregnant. However, if abortion occurs around month 8 or 9, the result will be two fairly large still-born foals. Obviously, no breeder wants to be faced with such a shock and left with no foal. In some cases, fully-developed twins will be born live but the mare may not produce enough milk for two foals or one foal may not sufficiently grow and thrive — or both may die. For these reasons, a twin pregnancy should be avoided. If two amniotic sacs are visible on ultrasound, the veterinarian will attempt to pinch off one. If fixation has not yet occurred, there is less risk of damaging the other amniotic sac. 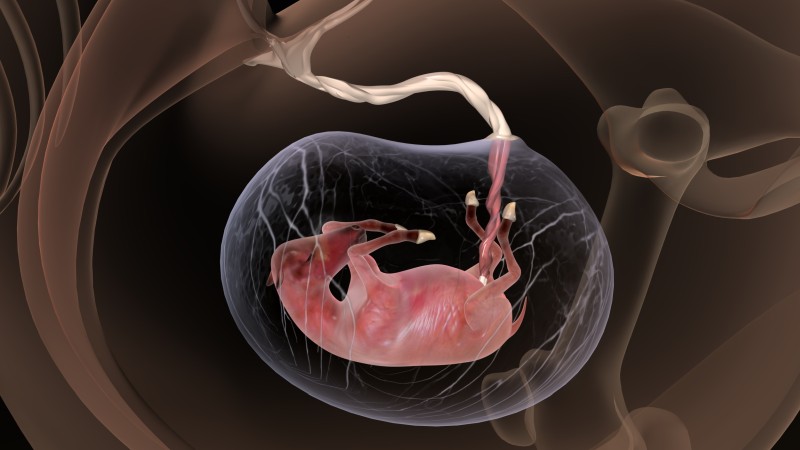 Around day 17, we see more embryonic development. First, a "neural tube" appears which will eventually form the spinal cord and nervous system. Then blood vessels form at the base of the spinal cord from which the heart develops. Once it is sufficiently developed, a heartbeat can be detected on ultrasound around day 21 to 23.

Many veterinarians do a second check on day 30, at which point they can see if the embryo is viable. If a heartbeat cannot be detected, the embryo is likely deceased. Appropriate measures can then be taken to breed the mare again.

A living embryo will take on the shape of a tadpole, curled with a convex head and a tail. Later, the tail disappears and the head becomes more shaped. During this period, the perfect round sac begins to lose its shape and the amnion, the innermost membrane that envelops the embryo, continues to further expand. Around day 37, the umbilical cord is formed within the amnion. To many scientists, this marks the end of the embryonic stage, and the developing foal is now termed a fetus. Although the mare can still lose her fetus, the greatest risk of pregnancy loss has now passed. 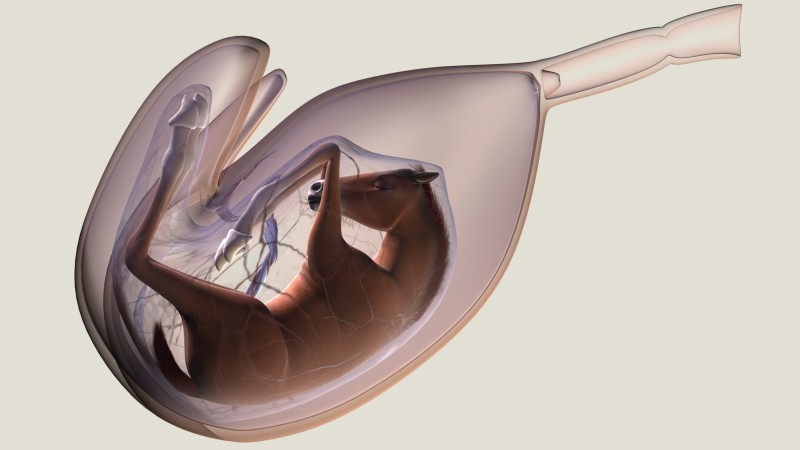 A 40-day-old fetus is clearly recognizable as a foal but in miniature: its head, legs, hooves and body are tiny. At this point, the fetus measures approximately 5 centimeters. All its organs are present, and they are developing into their ultimate shape. Now that its vital organs are formed, the fetus's main task is to grow.

The veterinarian also has an important task in this period: to determine the gender of the fetus by means of transrectal ultrasound, which should be performed around day 65. However, the process is not easy: the foal must be in the proper position, and good quality equipment is required. A trained veterinarian can detect a penis from a clitoris on the fetus based on their respective positions. The penis is located between the hind legs and the umbilical cord, while the clitoris is located between the hind legs and the tail. After 90 days, sex determination becomes more difficult because the fetus is positioned deeper in the mare's belly.

Around day 120, however, the fetus is positioned higher again and its sex can be determined with a rectal ultrasound. The veterinarian will primarily look for the difference in shape between an ovary and a testicle within the fetal abdomen. Between day 150 and 200, the sex of the fetus can be determined with external ultrasound, through the abdominal wall of the mare and the fetus. This procedure allows the internal reproductive organs to be visualized but becomes very difficult to perform much past day 200 when the fetus is even larger. Regardless, the success of each method is dependent on the foal being in the proper position, which is essential for visualizing the reproductive organs.

The fetus will continue to grow in the coming period. On day 100, it is about the size of a kitten; on day 150, the size of a small cat; and on day 180, the size of a small dog. In this period, the fetus lies in random positions but often on its back. On day 240, the fetus weighs approximately 16 kilos and now is too large to rotate lengthwise in the uterus. As a result, it lies with its head and forelegs facing rearward. In addition, its first hairs also begin to grow on the lip, throat and ear cup. A month later the fetus weighs approximately 30 kilos and has hair all over its body. However, another two months of gestation must take place. During this period the fetus is able to move its head and front legs slightly, mainly stretching. This movement can sometimes be felt or seen in the mare's flanks. In the last two months of gestation, the fetus has less room in the uterus but continues to grow until it is delivered. Until that time, it lies on its back but during the delivery phase the fetus becomes tilted in the uterus after which, if all proceeds normally, it is born with its head and forelegs first. On average, gestation ranges from 335 to 340 days, although 320 to 365 days is also considered a normal range.

After the foal is born, the placenta that nourished it for the past 11 months is expelled. The umbilical cord between the foal and the membranes usually breaks when the mare stands up, but it may be removed by hand if necessary. Then the foal should stand. First-time breeders should be aware that the foal's hooves will be covered in a soft rubbery layer, called the deciduous hoof capsule, which protects the mother's uterus and birth canal from the sharp edges of the hooves during pregnancy and birth. This capsule quickly wears down to a level hoof as the foal takes its first steps. If all is well, the newborn foal begins to nurse from its dam within the hour. After 11 months, the moment for which every breeder waits has finally arrived: the start of a new life.

Are you expecting a foal soon? Or are you planning to breed in the future? We have some handy tips and useful information about the breeding and registering of your foal(s) on our special page. We also offer you a discount on requesting a D-OC predicate with your foal, you can read more about this here.