The FEI spoke to Steffen Peters about his horse Suppenkasper 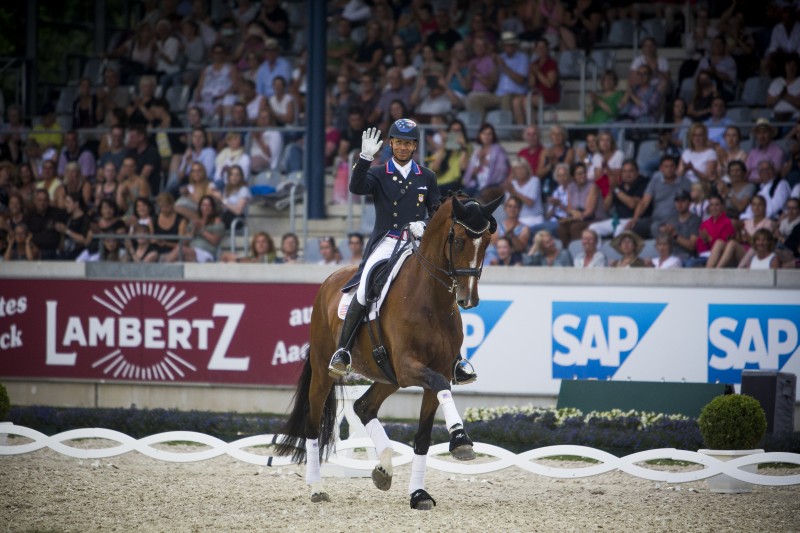 The FEI spoke to American dressage rider Steffen Peters, who tells how his KWPN gelding Suppenkasper has changed his life and career. Steffen Peters was ready for the final of the FEI Dressage World Cup ™ 2020 in Las Vegas, which unfortunately has been canceled.

His dream performance in Las Vegas can now only ever be a figment of his imagination with this year’s FEI World Cup™ Finals having been cancelled due to the Covid-19 outbreak. The 2020 Olympic Games scheduled for this summer have gone too. But the hard work continues and Steffen even considers that an extra year with the incredible 12-year-old Suppenkasper (Spielberg out of Upanoeska stb keur prest IBOP-dr by Krack C, breeder F. van de Poel from Haps) could well be a blessing as he pursues Dressage success in Tokyo in the summer of 2021.

Steffen told the FEI: “I was so excited about the final because Las Vegas and the arena itself is very special to me. Mr Thomas, who was one the founders of the arena and whose name was given to it, was someone I truly respected and enjoyed talking to, and it’s another reason I look forward to performing there. I love Las Vegas. The shows and the lights and the buzz make it such a great part of the American culture and we are proud of it. I hope we get it back there one day. I hope Mopsie and I are not too old. I was so disappointed that the final was cancelled, but you can’t change reality – only your perception of reality. For us, we are just going to use that extra year to improve together and work hard. It’s not perfect for anyone but the extra year could be beneficial for us.”

‘Mopsie’ is, of course, the pet name of Suppenkasper, the horse that has transformed Peters’ career in the last 12 months. The pair began working together at the start of 2018 after the massive 18.2 hand Dutch Warmblood gelding was acquired by Peters’ long-time sponsors Akiko Yamazaki and Jerry Yang.

Their partnership saw its first major test when they finished way down the field in the 2018 FEI World Equestrian Games™ in Tryon. Steffen was in a bad place mentally at that time “I could talk myself into defeat” and talked publicly about his battle with depression. He believes Tryon was too early for their partnership, particularly with Suppenkasper not used to such an atmosphere.

He said: “Mopsie has been my best and least expensive therapist. He’s gotten better and better over the last year and credit for that goes to coaches Debbie McDonald and Shannon, my wife, and the owners, Akiko and Jerry. It started pretty much last year in March when things slowly got better and better and scores went up and up. He’s becoming desensitised to the crowds at big shows and is starting to really display his talent. I am so fortunate to have him. Without a horse like that it doesn’t matter how well you ride.”

Steffen has worked with some fine horses in more than three decades at the top. “Working with Mopsie has been a little different,” Steffen said. “With my others I felt as though I brought them through and grew with them. With Mopsie I found him and advised Akiko and Jerry that this was a potential champion. There’s a pressure that comes with that. I’m sure people think I’m lucky to get this ride, and I would totally agree with them. He’s more confident in shows now. The important part is that we keep him healthy and relaxed and don’t push him. He’s so confirmed now in the movements. You shouldn’t practice all moves every single day, that can be stressful. I’ve always believed in calling it a day when slight improvements are achieved.

“The highlight of our last year isn’t a big win or big score, it’s just how we’ve got him to relax. He used to get uneven in piaffe as he got too excited and started to sway in front. That’s got so much better. He’s such a giving horse that we sometimes have to calm him down a little so he doesn’t push himself too hard.” Their success has bred confidence and further success. As well as enjoying their wins and podium finishes and appreciating Mopsie’s technical excellence, Peters feels privileged to have got to know the gelding’s personality.