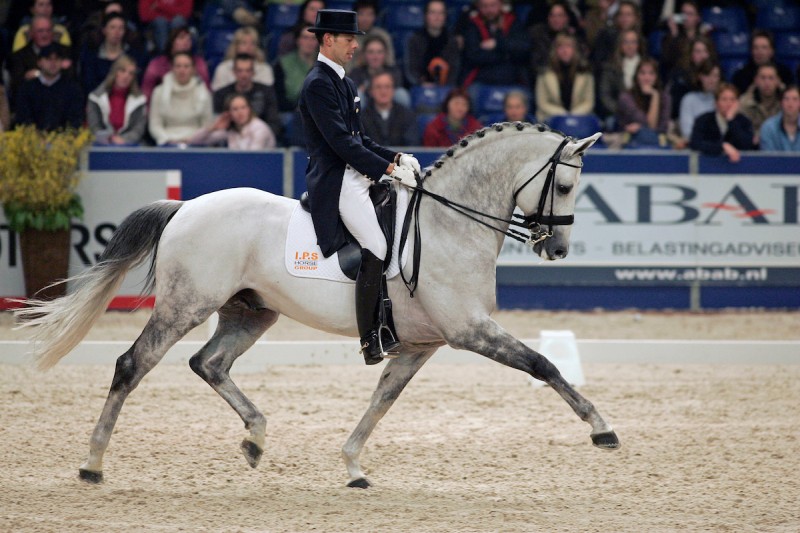 The highest level in sports, that is what breeding is all about. Of all the foals born, only a small portion will push through to the best of the best.
Character, attitude, health, a functional conformation, environmental factors and the right package of dressage genes will determine if a horse will accomplish the highest achievable in dressage. You as a breeder think long and hard every year to choose the best stallion for your mare, and all you can do is hope that it all will fall into place like you intended.

The KWPN still is known as the studbook with the most strict stallion selection program. To be approved with the KWPN, the stallion will always have to take part in the performance test in Ermelo. But what are the results of these stallions? Do they deliver us the better dressage horses? To answer these questions, we have looked into the KWPN-registered horses that have performed on Small Tour-level or higher and have a KWPN-approved stallion as a sire. No less than 2.500 KWPN-horses meet those criteria. The KWPN-approved stallions that were taken into account have a maximum age of 30 years, or in other words are born in 1990 or after. On this basis, the analysis tells us we have 275 stallions that have at least one son or daughter performing on Small Tour-level or higher. Acknowledged stallions were not taken into account, since they did not complete a performance test.

Jazz On Top
The 29-year-old Jazz is the proud leader with 299 KWPN-offspring that have at least a performance at Small Tour level behind their name. He is followed by Gribaldi with 184, Johnson with 112, Krack C with 91 and Vivaldi with 82. Most of these stallions have, however, also covered a lot of mares and have the most KWPN-registered offspring because of that. The youngest stallions in this ranking are Johnson and Vivaldi.

Top Deliverer In Relation To Number Of Foals
When we relate the number of offspring performing on Small Tour-level or higher to the total number of registered offspring of a stallion, we see a different top 10. Looking at stallions that have produced at least three offspring with a career on Small Tour or higher level, Rubels is in the lead. He notes no less than 11 sons and daughters on at least Small Tour-level, out of 107 offspring in total. One of them is GLOCK’s Zanardi, ridden by Hans Peter Minderhoud. On second place, we see Jazz again. Of his offspring, 9,5% reached Small Tour or more, just like 9,4% of the offspring of Paganini. Looking at Painted Black, 55 out of 623 of his offspring was able to perform at Small Tour level or higher, 8,2% of the offspring of Sir Sinclair reach this level and of Tchaikovsky the percentage is 8,1, just like for Turbo Magic. Lingh is following at close range with 8%, and Ziësto with 7,7%, Welt Hit II with 7,3% and Vivaldi with 7%. The majority of these stallions have performed at the highest level themselves.

Separate Ranking Young Stallions
The youngest horses that are qualified in the Small Tour, are eight years old with four exceptions: Ivy (s.Lord Leatherdale), Inclusive (s.Everdale), Iago (s.Dream Boy) and Rubiquils Ich Weiss (s.Rubiquil). We consider a stallion ‘young’ when he was eight years or younger at the time he conceived the foal. That means the sires of these ‘young horses’ are born in 2003 or later. Because the biggest part of the offspring of these horses are too young to be classified in Small Tour, they don’t come up in the rankings mentioned above. For this group of relatively young stallions, we created a separate ranking. We see Ziësto in the lead in this ranking, with eight of his offspring out of 104 performing at Small Tour-level.

Influences On Damside
What do horses like Bordeaux, Aquamarijn and Amaretto B in common, except for the fact that they all perform at Grand Prix-level? They all descend of the stallion United and have Gribaldi as their damsire. In total, this combination has resulted in a horse that is classified in Small Tour or higher an impressive fourteen times. Also, Jazz as a sire and Contango (17), Ferro (13) or Ulft (18) as damsire seem to be succesful combinations.
Jazz has been the damsire of an at least Small Tour-horse 124 times, Ferro 107 times, followed by Gribaldi (79), Krack C (68) and Flemmingh (50).

Tried And Tested Combinations
Also, the combination Lord Leatherdale x Negro seems tried and tested and it has lead to seven horses at at least Small Tour-level, for example the KWPN-stallions Chippendale, Everdale and Glamoudale. Of the 48 horses performing on Small Tour and higher level Tuschinski has produced, five are bred out of a dam with Havidoff as a sire.
Also, Gribaldi x Pion has proven to be a success and has resulted in ten horses at at least Small Tour-level. The stallion OO Seven seems to fit the blood of Jazz-mares very well, this combination had delivered eleven horses that are performing in Small Tour and higher classes.