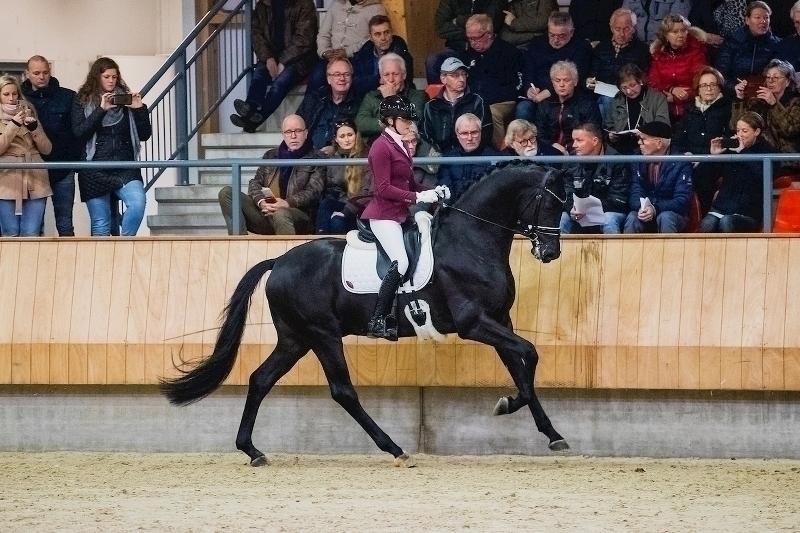 A heavy bidding battle preceded but u German bidder eventually managed to place to highest bid. The straw Chacco Blue semen has been sold for 42.000 euros. Bidders from Poland, Slovenia and the United Kingdom were interested until the end. Another popular item was an embryo by Le Formidable out of the dam of Vivaldi. This item has been sold for 38.000 euros and will remain in Dutch hands.

A very interesting collection of breeding mares in foal and embryos went under the digital hammer. It was the first edition of this KWPN Online Broodmare & Embryo Auction. And it turned out to be a gap in the market. Many breeders offered their mares and many potential buyers could be welcomed on the auction website. Foreign bidders also found their way, as seven mares and three embryos were sold abroad. The average price for breeding mares was almost 11.500 euros.

The most expensive jumping mare was the 4yo Hermantico daughter Lynette H&H. She will stay in the Netherlands for 15.000 euros. The 1.40m jumping mare De Meta (by Lord Z) has been sold to Hungary for 14.500 euros and for the same amount Loralinde DN (by Zirocco Blue VDL) found a new owner in Mexico.

Most expensive dressage mare Incilla (by Andretti) was also sold for 15.000 euros and will stay in the Netherlands. Ja d’Orlandaise (by Negro) will go the United Kingdom for 14.500 euros.

The embryo by Le Formidable out of Vivaldi’s dam became one of the highlights of the auction. Two Dutch bidders were highly interested and the embryo got sold for 38.000 euros. The embryo by For Pleasure out of a dam that has already produced two 1.60m horses has been sold to Australia for 14.500 euros.

Senior inspector Wim Versteeg is very satisfied with the result. "It is good to see that there is a lot of interest in selected breedingmares who are in foal of an interesting stallion and are genetically interesting themselves. This auction has not gone unnoticed by the foreigners either and it is good to see that they appreciate the Dutch KWPN horses. Various mares and embryos have actually been sold in Europe and beyond."

All auction results can be seen on the KWPN auction website.