Trendsetting Jumper Mares, The Base Of Grand Prix Horses 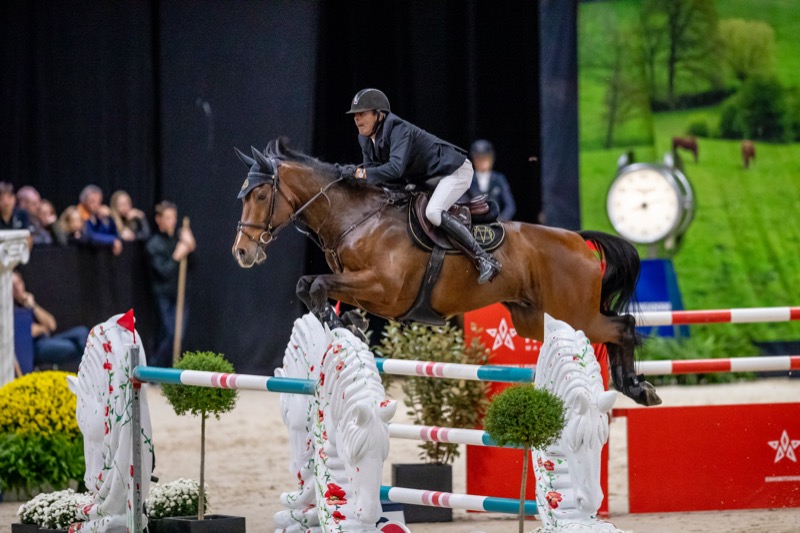 To anyones succes in breeding, a mare is the base. The influence of these mares is respectable. They carry and  care for their foals, but that is not all. Some mares give more of themselves than others and some seem to fit a certain stallion very well. One thing the mares in this article have in common: they produced more than one Grand Prix horse.

Katosca and Estrella
The majority of these 2,500 mares were able to produce one Grand Prix dressage or jumper horse. Only a small number of mares have put a stamp on breeding. The mares Katosca and Estrella are two mares who have produced four offspring – born in 1995 or after – who were able to grow to the highest level. These two leading mares were paired to different stallions and still gave above average quality horses.

Four Times a Different Stallion
The Joost-daughter Katosca is the full sister of Osta Carpets Carrera. With Belgian rider Claude van Geenberge, Carrera was able to win the Grand Prix of Aachen in 1993. Katosca’s dam, Tosca, is one of the few ‘prestatie’ mares with five daughters wearing the same predicate. After Carrera, breeder Greetje Folkerts choose Joost again for her mare Tosca. This resulted in the keur preferent prestatie mare Katosca. Greet used Tosca for breeding for years. In KWPN Magazine number 10 of 2019 , Greetje tells about her: “Katosca was very similar to Carrera. Bigger, but with a lot of blood and elasticity. They are quick horses with fighting spirit, who always want to finish.” Katosca is the dam of 1.60m Grand Prix horse Ocorde (s.Concorde), Sungraaf (s.Burggraaf), Toscane (s.Lux) and Djoost Again (s.Cantos). In total, this mare gave birth to thirteen offspring. “In Ocorde’s type, you can definitely see Concorde. He had a little less blood in his type, but he did have character.” About Djoost Again Greetje says: “I doubted a long time about Cantos, because he has Goodtimes in his pedigree. Our damline has a lot of blood too, so I was worried that this combination might become a little bit too much. Later, good offspring of Cantos were popping up, so we bred a couple of times with him. Djoost is one of them.”

Estrella
Estrella, a daughter of G.Ramiro Z, also produced four Grand Prix-horses, born in 1995 and after. She is at the basis of Rolls Royce (s.Concorde), Vennoot (s.Andiamo), Wall Street (s.Hors La Loi II) and the KWPN approved stallion Astrello (s.Casantos). Just like Katosca, she was able to give Grand Prix horses combined with a different stallion each time. In total, she produced seventeen sons and daughters of which four 1.40m-level horses, one 1.50m-horse and five Grand Prix-horses. In addition to the four mentioned above, she also produced the Grand Prix-horse Morningstar (s.Damocles) who was born in 1994.

Insanely good
Estrella produced four Grand Prix horses by four different stallions. Actually five, when we take Morningstar into account. “Estrella really is an insanely good broodmare. She gave horses with front, extremely well to ride and with a carrying hindleg. She actually fitted each stallion and gave a lot of her own qualities to her offspring. The blood of Concorde and Voltaire fitted her well. Concorde could be a little bit more horizontally build, but Estrella gave enough front to her foals. The choice for Concorde goes without saying.” After Ilcora, her full sister Pinot was born and Rolls Royce the year after. The last mentioned reached Grand Prix with Canadian rider Paul Halpern. “After that, we choose Voltaire and later we picked Andiamo.” That combination gave Vennoot. “When he was five years old, we sold him to Willi Melliger with the help of Jurgen Stenfert. That horse really jumped fantastic, with such a good technique in the hindleg.” After Vennoot, the third Grand Prix horse by Estrella was born, Wallstreet (s.Hors La Loi II). Astrello (s.Casantos) was the last Grand Prix horse out of Estrella. He was approved for KWPN and was later sold to Russia.

Mares With The Sport Predicate
Libero H-daughter Lilihan earned the sport predicate in the jumping arena. She competed up to 1.35m level. In combination with Quidam de Revel, she gave the Grand Prix-horse Secret (breeder P.Jorissen of Simpelveld), combined with Concorde she also gave birth to Unbelievable. The mare Atlanta is a descendant of For Pleasure (breeder M. Keulen of Stevensweert) and also competed at the highest level. Of the over 2,500 mares with offspring competing at Grand Prix level, one fifth has the sport predicate behind their name. That comes down to over 500 mares.

Good Match
In the article of KWPN Magazine 3: Grand Prix gives Grand Prix, we dove into the KWPN Database in search of horses classified as 1.50m level and higher. In addition, we found out which combinations of bloodlines guaranteed succes. For this analysis also, we have compared the damsires to the sires of the Grand Prix horses. We had already concluded in the mentioned analysis that Voltaire matches Indoctro (5 times) and Numero Uno (8 times) well. Nimmerdor is noted 66 times as a damsire. Burggraaf is runner up with 58 mares who carry his blood and subsequently delivered a Grand Prix horse. In combination with Concorde, this resulted in seven Grand Prix jumper horses and paired to Heartbreaker, four. The blood of G.Ramiro Z on the damside matches well with Heartbreaker (5 times), Concorde (4 times), Indoctro (4 times), Quasimodo Z (4 times) and Krack C (4 times). Examples are Tennessee W (Concorde out of Elottie W, breeder P.H.B.M. van Wegen of Raalte), who competed at the highest level with Henk van de Pol, the KWPN approved and Grand Prix-stallion Oramé (Indoctro out of Iramee, breeder L. de Bruijn of Liessel) and the 1.60m-mare Alandra (Quasimodo Z out of Lieke, breeder C. Timmermans of Oost- West- en Middelbeers).

Youngest Mares
The youngest mares in this analysis were born in 2007 and consequently are thirteen years old now. The youngest Grand Prix-horses are born in 2011 and are nine years old now. The thirteen-year-old mare C’Est la Vie (s.Verdi) gave birth to her first offspring at an age of four. This Garant (s.Warrant, breeder Gebr. Bosch of Luttenberg) became World Champion in Lanaken as a five-year-old with Willem Greve and is now competing at the highest level with Beezie Madden. When we take a better look at the age of the mares at the time the Grand Prix-horses were born, we see that almost half of those horses were born when their dam was four to five years old. For example, the dams of the nine-year-old Grand Prix-horses Girocco-D (Zirocco Blue VDL out of Cindoctro-D by Indoctro, breeder K. Duursma of Schoonebeek) and Garezzo (Arezzo VDL out of Burena by Padinus, breeder P. Jansen of Deest) were respectively four and five years old when their offspring was born. A big chance that we will hear more from these relatively young mares in the future.