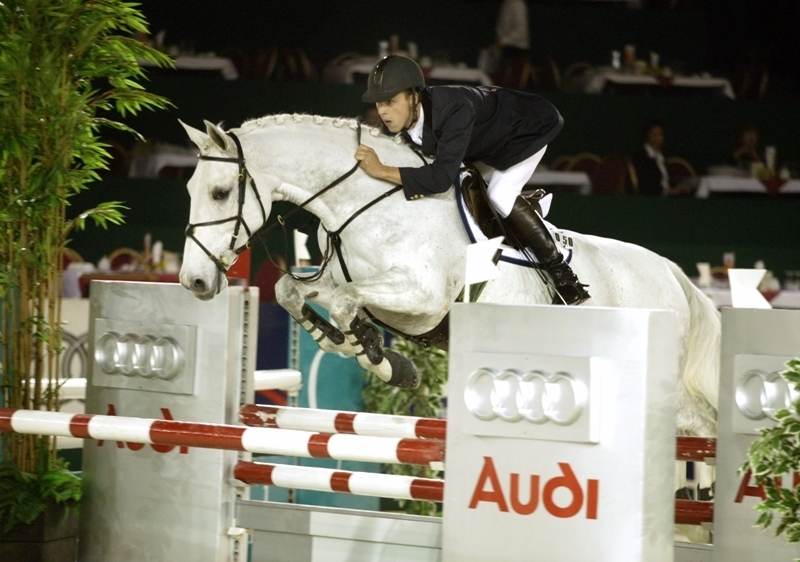 Larthago (Carthago out of Daisy IV by Caletto I), the dam of KWPN-stallions Harley VDL and Casago, passed away at an age of 27. Larthago gave birth to nine international sporthorses (six of which 1.50m or higher) and five approved stallions, among which Harley VDL and Casago.

The grey Holstein mare Larthago was born in 1993 as a daughter of the famous top progenitor Carthago, who participated himself at the Olympic Games with Jos Lansink twice. He has not only proven himself in the direct line, because his influence as a damsire is at least just as big. Larthago was bred by Klaus Göttsche-Götze out of the Caletto I-mare Daisy IV, out of the Holstein damline 8749. She also is the dam to Cassini I-son Casino 14, who has performed up to 1.50m-level in Germany.

Succesful Jumper Horse
With KWPN, the KWPN studbook mare has earned the predicates sport-jumping, preferent and prestatie in spades. We interviewed owner Martien van der Bruggen in 2018 for our KWPN Magazine. “I baught Larthago as a foal at an auction in Holstein, because I loved the blood of Carthago and it was a big, longlined filly. It might not have been the most modern mare, but she had height, a lot of length, a long neck and a nice head. Some people critisized her and asked why I would drive to Holstein to come back with a Harness Horse, because she might look like that a little bit”, Van der Bruggen thinks back with a smile. Those critics were silenced soon, because Larthago appeared to be a fantastic jumper. “Luckily, Larthago proved to be a very good jumper horse. Koen Leemans has ridden her up to when she was seven years old and was among others champion in the 1.30-class. After that, we changed riders with the eye on the higher level in sports. Matthijs van Asten started riding her, together they won 33 international classes, among those in Reims, Bethune, Aarhus, Leeuwarden, Birmingham, Rotterdam and Zuidlaren. When she got injured, I decided to try embryotransplantation with her before she would re-enter the jumping arena, but that never happened in the end.”

Approved Sons
Larthago not only gave birth to sport horses, she also produced two KWPN-approved stallions. Those are the preferent Harley VDL (s.Heartbreaker) and Casago (s.Casall).

Harley VDL
In 2001, Larthago delivered four offspring by embrytransplantation. Two of them by Heartbreaker, among which her most famous offspring: Harley VDL. “Larthago is a mare with a super character and I decided to breed her with the very sharp Heartbreaker. Ursel was a very lively and ‘spooky’ foal, I did not think he was very special at the beginning, he was a little bit of a fat pellet, as we say. But he developed very positively. The VDL Stud bought him and later changed his name to Harley VDL.” The full brother of Harley VDL was born in the same year and is called Uncle Sam. He performed with Larthago’s first rider Koen Leemans up to 1.45m-level. After that, he was sold abroad.

Daughters Also Prove Themselves
Luckily, also the daughters of Larthago proof to be cut from the right cloth, because multiple have proven to be capable to produce international jumping horses and approved stallions. For example, the five-year-old KWPN approved stallion Cantona TN (s.Codex One) is bred out of Larthago’s daughter Claudia Z.