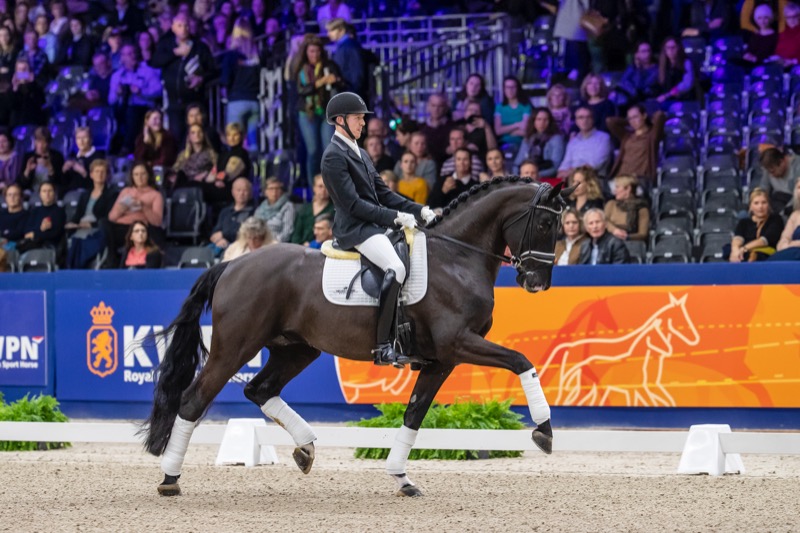 The predicate system of KWPN is unique in the world and there is no other studbook that differentiates the qualities of mares and stallions in this way. The ‘prestatie’ predicate is proof of the hereditary power of a mare in the area of sports. But how many Gelder ‘prestatie’ mares has the KWPN, and do these mares breed daughters that earn the predicate themselves? And which stallions have sired these ‘prestatie’ mares? Read more in this article!

‘Prestatie’ mares with ‘prestatie’ offspring
Because the ‘prestatie’ predicate indicates that the mares inherits quality for sports, it is interesting to know if these mares are able to produce ‘prestatie’ daughters in their turn. Of the 31 mares that carry the ‘prestatie’ predicate, five of them have daughters that earned the predicate too. Irene (Purioso out of Irene keur prest by Cehadee, breeder P. Selten of Gemert) has no less than three ‘prestatie’ daughters: Norene (s.Zichem), Summer Time (s.Flemmingh) and Alpha Irene (s.Rhodium). Norene and Alpha Irene don’t only pass on sport quality, but also performed in sports themselves: in Z2 class dressage. Moline (Elegant out of Doline keur by Walser, breeder Th. Eikelboom of Wageningen) has produced ‘prestatie’ mare Soline (s.Inspekteur). Soline is also classified in sport, she has performed at M2 level. The mare Masia (Zichem out of Desie by Satelliet, breeder J.W. Hendriksen of Halle) is the dam of Virgin S. (s.No Limit), this mare has jumped up to 1.35m level.

Approved offspring
Five approved stallions stem from ‘prestatie’ mares, these are: Wilson (s.Koss), W V Saron (s.Creool), Casaron (s.Ginus), Zethar (s.Parcival) and Kardieno (s.Dante Weltino). Wilson was trained for sports by Anita Berendsen. In the Netherlands, Wilson has scored well in Small Tour with Sabrina Melotti and Gerrel Vink. The dam of Wilson the keur preferent prestatie mare Metha (Cabochon out of Zinta keur pref by Heemraad, breeder K.H.J. van Leijden of Hengelo), was champion as a three year old on the National Day of the Gelder Horse. The black eyecatcher W V Saron is listed as one of the most versatile stallions when it comes to his performances. He was competing at a young age in international jumping at 1.35m level. Next to that, he was competing at Small Tour level in dressage and was regularly high ranked. So, a real winner when it comes to versatility.

The dam of W V Saron is the ster prestatie mare Nazarona (Zichem out of Zarona keur prest by Irak, breeder W. van Sijpveld-Bomas of Ommeren). Casaron is truly a versatile Gelder horse stallion too. Not only he jumped at Z level, but he is also classified in Z2 dressage. He also participated in eventing shows and he showed himself in carriage regularly also. Casaron is also an offspring of Nazarona.

The Gelder stallion Zethar was ridden by Stephanie de Frel, and together they showed in national Grand Prix dressage. Zethar is by the keur prestatie mare Panakeia (Cabochon out of Carina keur prest by Vosmaer, breeder H. van de Wetering of Nijkerkerveen).

Dante Weltino son Kardieno was approved with KWPN in the fall of 2018. His talent did not stay unnoticed, Andreas Helgstrand has baught the stallion after an outstanding performance at the KWPN Stallion Show. The dam of Kardieno is Vidieni (Parcival out of Ladona ster pref by Hendo, breeder H. Koenes of Winsum). The mare was champion of the Gelder foals in 2002, and is classified in 1.30m jumping in the meantime. She also performed at Z2 level dressage.

International Success
Multiple offspring of ‘prestatie’ mares have proven themselves in the internationa sports. The son of Ira (Amulet out of Wera by Indiaan, breeder G. Witlox of Helvoirt), Pandoer (s.Recruut), Tyara (s.Farrington), an offspring of Jolimba (Bazuin of of Olympia pref by Folio, breeder K. Christiaanse of Middelburg), Rajazz (s.Jazz), an offspring of Lionne (Zep out of Brione keur by Ivanhoe, breeder T. van de Berg of Zwijndrecht), Figaro (s.Apache), zon of Norene and Zethar (s.Parcival), the son of Panakeia, have all proven themselves at the highest level in dressage, Grand Prix. Conair (s.Unitair), Acapulco (s.Numero Uno) and Edie-Amingo G (s.Amingo), offspring of Isabella (Cavalier out of Samalinda ster pref prest by J.Amagun, breeder J. Meppelink of Schagerbrug) and W V Saron have proven themselves in the international jumping arena. Daughter of Vidieni, Diede Dieni (s.Spielberg) and Artiest (s.Trento B), an offspring of Norene, have both performed at international Intermediaire I level.

‘Prestatie’ mares with the sport predicate
Some mares have earned the sport predicate next to the ‘prestatie’ predicate. They earned the last based on the performances of their offspring, but have achieved a certain level in sport themselves too. Isabella is an example of a versatile Gelder horse, this mare has performed at M1 level dressage and jumped at 1.00m level. Mesalliance (Cabochon out of Esperance keur pref by Goudsmid, breeder R.Ph. Hekkert of Wijhe) is also classified in jumping and dressage. The chestnut Vidieni (Parcival out of Ladona ster pref by Hendo, breeder H. Koenes of Winsum) is doing even better by her Z2 performance in dressage and she also jumped at 1.30m level. Oranda (Zichem out of Biola pref by Theoloog, breeder H.A. Bruil of Terborg), Leonora (Elegant out of Volande by Prins Oregon, breeder G. Jansen of Zoelen), Nancy (Ganges out of Fammy keur by Wouter, breeder A. Thijs of Heeze), Lia (Zichem out of BIanka keur pref prest sport-dr sport-men by Satelliet, breeder G.J. Lammers of Halle) and Soline ((Inspekteur out of Moline keur pref by Elegant, breeder TH. Eikelboom of Wageningen) are all five classified in M level dressage. Ilina (Bazuin out of Zijlina by Ornaat, breeder W.A. Bruil of Winterswijk) has proven herself in dressage and performed at Z1 level. The dark chestnut Jolimba (Bazuin out of Olympia pref by Folio, breeder K. Christiaanse of Middelburg) and the chestnuts Norene (Zichem out of Irene elite pref prest PROK by Purioso, breeder P. Selten of Gemert) and Panakeia (Cabochon out of Carina keur prest by Vosmaer, breeder H. Wetering of Nijkerkerveen) were able to top that and performed at Z2 level. The bay mare Larose (Walser out of Fridarose by Zakerno, breeder H.P. Verstappen of Eersel) performed in Z level in driving. Oranda and Vidieni have even earned all predicates (elite preferent prestatie sport and PROK/D-OC) in their lives.