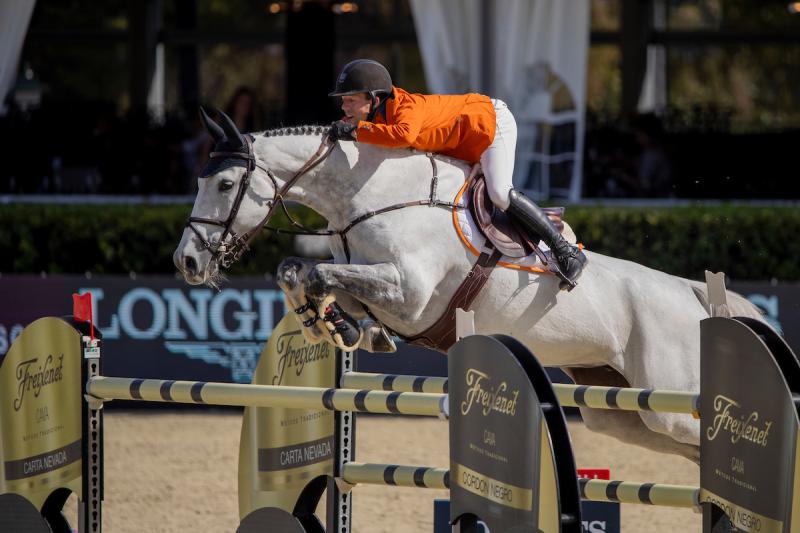 Dana Blue (Mr. Blue out of Tulana vb prest s.Hemmingway, breeder J.A.M. Bocken of Weert) came out of the Covid-19 lockdown to take two back-to-back CSI4* Grand Prix wins at Hubside Jumping Grimaud, in France. With Maikel van der Vleuten in the saddle, the 12-year-old KWPN mare has recorded a number of big victories and was also part of the Dutch team at the Longines FEI European Championships in Rotterdam last summer. World of Showjumping met Dana Blue’s breeders Jan and Paul Bocken, discovering that this success story is a combination of good luck and trusting that gut feeling.

Although registered in the KWPN, Dana Blue’s family can be traced back to the Holsteiner 242 line. Over 25 years ago, Jan Bocken saved the fourth mare in Dana Blue’s damline – Mulana, by Rushing Water XX – from slaughter. “Mulana had a severe problem with her hoofs, and her owners wanted to put her down. However, as a farrier, I figured I could maybe help so I bought her,” Jan begins. “She got better, and eventually she had a foal by the stallion Ramiro Z – Julana, that then had a foal by Burggraaf, Nulana - Dana Blue’s grandmother,” Jan continues. “Character seems to run in the family. I remember Nulana jumped out of the treating box when she was inseminated.”

“As my daughter-in-law Jenny is Swedish, we have a system where we send our young horses to Sweden and keep them there until they turn three. During her time there, Dana was a handful and was impossible to catch for any regular check-ups – like the farrier or a worm cure. When we went to get her back home to Holland, we had to drive the lorry in to the field and build a wall of straw bales to get her in… During the first year back at home, there was a struggle with getting her head collar on every day. Now, it seems it was all worth it though,” Jan smiles.

Originally, Paul’s wife Jenny was riding Dana. However, when she got pregnant a different solution had to be found. “I always liked the horse, so I really wanted to keep her,” Paul tells. “At the time, I knew Maikel was riding a few Mr. Blue-offspring and as Dana was a bit special I called him up and asked if he would like to try her. They clicked directly.”

“Every time she did a bigger class, people would seem to have doubts about her scope. However, I liked Dana and I always trusted Maikel – and he said his feeling was that this horse was going to jump the big classes,” Paul continues. “It did not always look like that, since she is not a spectacular jumper – but she knows where the poles are and she has the right character. In the ring, she is a real winner. I think Maikel really understands her and they go really well together.”

“She is very special,” Paul says about Dana Blue’s personality. “When we started with her, we could not put a head collar, front boots or bridle on – we had to put her in a treating box to get anything done. I remember the first shows she did – our rider could not get on her. He was a brave man and got on her in the truck and rode down the ramp... Because once you were sitting on her, then it was all ok – just everything before that was very challenging.”

“I free jumped with her when she was three, and I never saw anything like that before – she was so quick off the ground,” he continues. “I think we have been lucky with Dana Blue; her mother Tulana was jumping really well with my wife but got injured – otherwise we would not have started breeding. I saw the scope and carefulness in Dana, Maikel believed in her and we have been lucky that she has stayed healthy. Now we can only hope that it all keeps going in the right direction.”

Maikel van der Vleuten had the right feeling with Dana Blue straight from the start. “She was sensitive, and had a lot of blood – like she still does. She gave me the right feeling to start working with her,” Maikel recalls about his first impressions. “Dana has never been a spectacular jumper; the way she jumps now, she jumped when she was five.”

“If you accept the way she is, she fights for you in the ring,” Maikel explains. “You have to ride her the way she prefers as her mind is her best quality. I think we can be happy that we got her as a 5-year-old though. If you saw her as a 7-year-old, it is perhaps not a horse you would pick out. Nevertheless, the feeling has been very good on her from day one. She is focused on the poles, and clever with her jumping. She is a fighter and you can win classes with her and that is what I like about her. However, you have to know her a little bit – she is a handful. Luckily she has gotten better over the years, but still there are things we have to pay special attention to. She is nice to ride, but once you start jumping, she gets hot and then you cannot push her to do things. It is not always easy to tell her what you would like her to do either, so you just have to compromise and accept her as she is.”