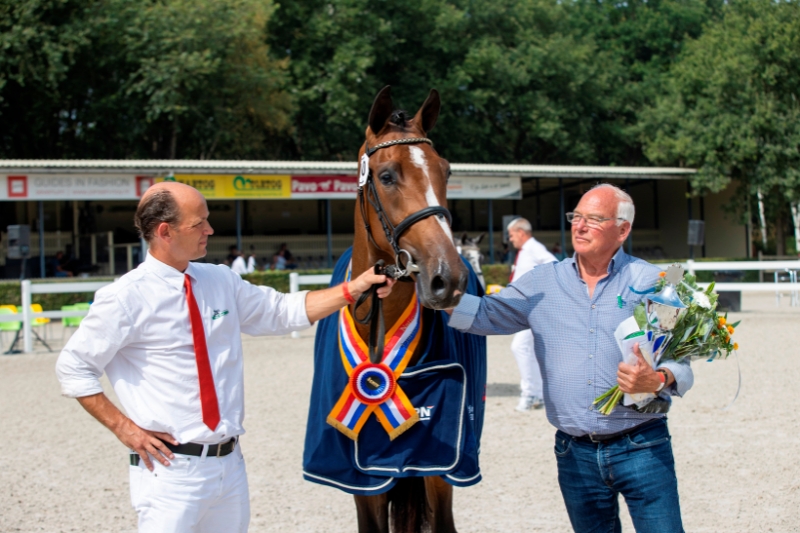 Under the supervision of only a limited number of people, the National Championship for jumper mares was successful. The 25 mares, that were directly selected at the studbook inspections, started in the morning with an assessment on their conformation and movement, and then free-jumped in the Amalia hall at the KNHS-centre. The eight most complete mares earned an invitation for the final in the main arena.

In this final the Etoulon VDL daughter Mette VDL (out of Fresia van Olivia VDL keur IBOP-spr by Cardento) of the breeder VDL Stud proved to be the winner, and she referred stable mate Magdalena VDL (Insider VDL out of Fulena VDL ster by Baltic VDL, b/reg.p VDL Stud) to second place. “Mette VDL is a very charming youthful mare with good rectangular model and correct conformation. She moves light-footed, has lots of balance in the canter and she showed herself really well in free jumping. With her reflexes, good use of the body and athletic ability, she is the most complete horse for us today! ”, said jury chairman Henk Dirksen, who assessed the jumping horses together with Nella Bijlsma and Marcel Beukers. Reserve champion Magdalena VDL is a long-lined mare who jumped with lots of scope and an exemplary technique behind. The mare Miletto (Carrera VDL out of Ziletto elite EPTM-spr pref PROK by Voltaire, breeder B.J. Huirne from Beltrum) of Jan van Meever was invited for the championships after a very good performance in the EPTM Mare test. She completed the top three. This youthful mare was very athletic in movement and jumping and opens very well behind on the jump.

Well-tested
The very strikingly jumping Arezzo VDL daughter My Golden Girl GR (out of Golden Girl ster IBOP-spr by Brugal VDL, breeder Theo Griffioen from Nieuw-Roden) of the VDL Stud finished in fourth place. At the studbook inspection she already received 95 points for free jumping and here she convinced again with her power, zealousness, overview and athletic ability. The fifth placed Tangelo van de Zuuthoeve daughter Mariana (out of Faviana ster by Baltic VDL) from b/reg.p. De Radstake had several fans as well. This very light-footed mare jumps with a lot of push, nicely upwards and with lots of body use. Sixth was Megason VDL (Impressive VDL out of Feguson VDL elite IBOP-spr PROK by Toulon) jumping with very good push, a very good use of the foreleg and great athleticism. She again is bred and registered with VDL Stud and managed to stay in front of the well-tested (IBOP 82), Milligram (For Pleasure out of Orashi elite sport-spr PROK by Cruising) from breeder Harm Hoekstra who jumped very eagerly. Very good last in this final was the careful, Myrusa H (Falaise de Muze out of Pyrusa H keur pref prest by Indoctro) of Anne-Jan Hazenberg from Opende who showed very good use of the hindquarters.

Read all about the National Championship in the upcoming issue of the KWPN Magazine.

Watch all mares back on KWPN.tv