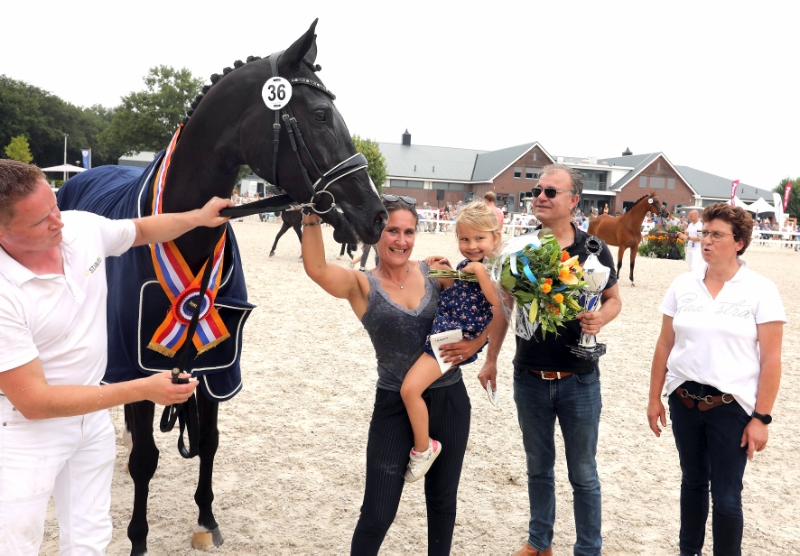 There was a lot of enthusiasm for the National Championship for Three-year-old Dressage Mares, where 31 mares entered the arena. Nine mares were invited for the championship ring, where the uphill build Magna Charta (out of Emybell elite IBOP-dres D-OC by Sir Oldenburg, breeder Gerke van den Bosch from Sustrum Moor) managed to leave all competition behind. The reserve championship was captured by My Toti DBG (Totilas out of Effie Ilona elite sport-dress IBOP-dres PROK D-OC by Contango, breeder Dressage stable Bax-Goris from Gendt) from Dressage stable Ilona Goris from Gendt.

Magna Carta
Four years ago Miranda Huisman lent her mare Emybell to Gerke van Den Bosch, who bred the first foal from Emybell. The result of this collaboration is the brand new champion mare Magna Charta, who was bought as a foal by Judith Ribbels. The very complete Dream Boy daughter stood out with her beautiful front and uphill movement. She stayed ahead of My Toti DBG, who won the judges over with her good walk. The appealing Franklin daughter Munette (out of Unette II keur pref by Gribaldi, breeder René Franssen from Boven-Leeuwen) registered with the breeder and Nadja Lommers from Sint-Oedenrode completed the top three after an impressive championship inspection.

Future
Floor Dröge assessed the mares together with Marian Dorresteijn and Johan Hamminga. She looks back with satisfaction on this conclusion of the Covid-adjusted inspection season. “My compliments to the breeders, because we had a very nice group in the arena. They are very complete mares, which we enjoyed not only today, but also during the studbook inspections. We are happy that we can look at the future of dressage, that is what was in the arena today.”

Championship inspection
The fourth place went to the very charismatic Hennessy daughter Madorijke (out of Adorijke elite pref IBOP-dres sport-dres PROK from Rousseau) from breeder R.W. Bennink from Roden. She was ahead of Marilyn-Dine (Daily Diamond out of Farludine elite IBOP-dress PROK from Vivaldi, breeder I.M.C. Schel-Schippers from Cuijk) registered with RS2 Dressage Center de Horst BV from Groesbeek. Maelynn Taonga (Ebony out of Jamsession Taonga elite sport-dress IBOP-dress PROK by Jazz) from breeder Stal 104 BV of Wijdewormer already did a good IBOP a few weeks ago and was placed sixth in the championship inspection now. Also placed in the leading group were the charming Governor daughter Miss M. (out of Windy elite pref IBOP-dress PROK from Krack C, breeder E. Minkman from Ochten) from breeder G.C. van der Koppel from Wadenoijen, the beautifully modelled Mint Ice Diamond US (Diamond Hit out of Ice Ice Baby US ster PROK, prelimary keur by Davino VOD, breeder Unlimited Stables from Lunteren) registered with Rom Vermunt from Geesteren and the very supple Miss Merle Promiss JV (Ibiza out of Cari Linda's Promise keur EPTM-dr by Florencio, breeder Karin Vissers of Raamsdonksveer) registered with the breeder and Ad Valk from Gorinchem.

Read all about the National championships int the next issue of the KWPN Magazine.