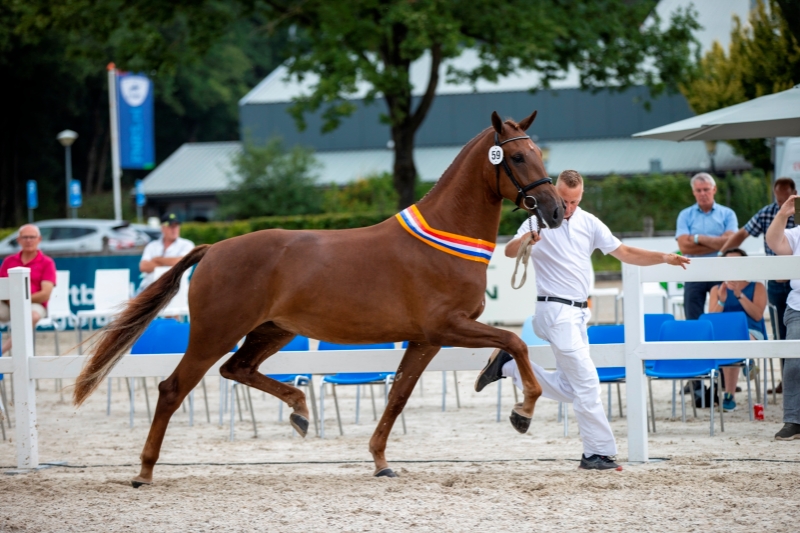 With three mares in the championship ring, the final round for the Gelder mares was certainly not the biggest championship of the day. Edmundo daughter Miss Montreal was crowned champion of this breeding direction, referring Mia-Amanda to the reserve title.

“We are pleased that we have three mares here who have shown themselves very well in movement. These horses come close to the type we like to see it in Gelder type breeding. When placing these three mares, it was all about the finer points and because of her way of moving we like to see Miss Montreal as champion”, explains jury spokesman Wim Versteeg.

Charming mare
Miss Montreal (Edmundo from Tuwalda ster by Fabricius, b/reg.p. M.J. van Bruggen from Varik) is, according to Versteeg, a charming mare with a lot of size, good length in the body and a beautiful neck shape. “Her movement is striking with her leg technique, good suspension and a hind leg that easily takes weight.

Mia-Amanda Reserve Champion
Former double foal champion Mia-Amanda (Alexandro P out of Amanda II ster pref by Farrington, breeder H.G. Hekkert from Wijhe), registered with J.H.F.M. Gijzenhout en and Steven Ruiters from Muiderberg is, according to the jury, good in the Gelder type, although a little more height would be desirable. "With her abundant leg technique, rhythm and suspension, this mare knows how to get all eyes on her in movement, that are trades we like to see in breeding."

Martine Rona
The third position went to Martine Rona (Wilson out of Rona keur pref by Factor) who is registered with Gelder Breeder of the Year 2019 Jan Vonk from Goudriaan.