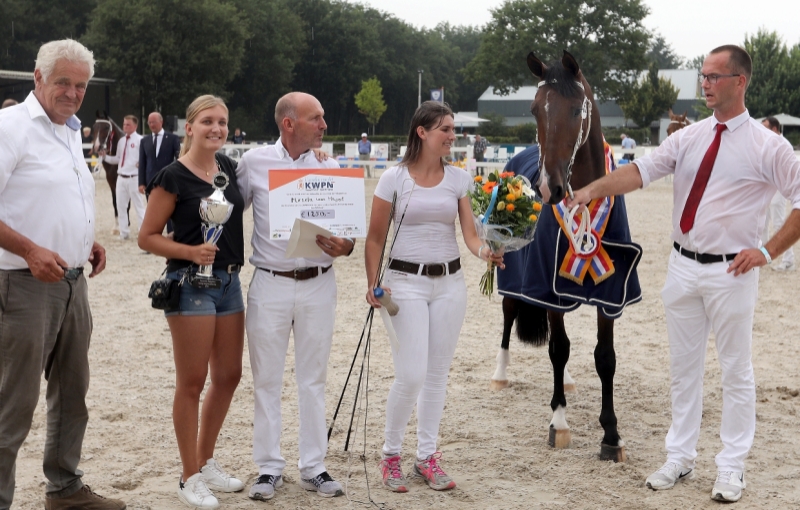 In advance, it became clear that the battle for the Harness horse title would be between the Cizandro daughters Mirzela van Hapert and Mexxima. They did not make it easy for each other and the jury, but the very expressive and powerful Mirzela van Hapert convinced during the final round in the pouring rain that there was no longer any doubt: she was the champion.

Time after time and every time from the first step, Mirzela van Hapert (Cizandro out of Irzela-C star PROK van Patijn, b/reg.p. J. Castelijns from Hapert, and also registered with L.D.J. Castelijns and P.P.C. Castelijns from Hapert) showed that she knows what means what uphill is. As jury chairman Viggon van Beest described: "We saw a real explosion of power today." He further described her as a very expressive mare with strong connections and great presence, who moves very well up in the withers.

No easy choice
It was not an easy choice for the jury, which besides Van Beest consisted of Henk Prins and Marie-José Calis. Because, As Van Beest said:  "Both mares have their own pluses and these mares, but actually the whole group, are absolute top mares."
Cizandro daughter Mexxima (out of Betske keur pref sport-harness from Marvel, b/reg.p H. Lassche from Rouveen) did not seem to get into her rhythm today, but was nevertheless stiff competition for the eventual champion. “A mare that is even more modern in her model than the champion and has a textbook front. The foreleg is positioned nicely in the front part of the trunk and she really looks over the stands in movement.”

Youth
Third of the seven mares invited for the final was Miss Cerona VS (Atleet out of Cerona elite PROK by Victory, breeder W.M. Veneklaas-Slots from Zeijerveld) by M.E. de Wild from Geffen. “A mare that stands out with her lovely youthful appearance, the youth radiates from her. She is all about technique in movement.”

Read all about the National Championship in the upcoming issue of the KWPN Magazine.