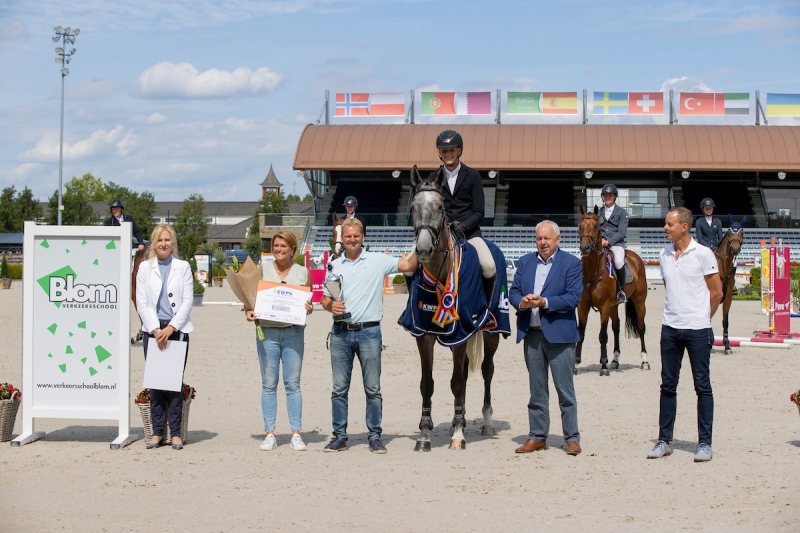 It was an exciting battle in the Blom Cup for four-year-olds. Both VSN champion Love de Vie (by Grandorado TN) and Lamborghini (by Dallas VDL) got 9.3 and 9.0 in the final.

There had to be a jump-off to determine who could call themselves the winners of the Blom Cup 2020. Willem Greve rode the Grandorado TN daughter Love de Vie (out Eau de Vie by Vigo d'Arsouilles, b/reg.p Herman van Triest and Jos Meuleman), who is usually ridden by Juulia Jylas, only for the third time. They had to leave the win to Lamborghini (Dallas VDL out of Wiske ster sport-spr PROK by Kojak, breeder Family Testers) under Stijn Testers. In the jump-off the latter achieved the fastest result and could so secure the victory.

The assessment was in the hands of Enda Carroll of Ashford Farm and Ralph van Venrooij, who were both clearly satisfied with the quality of the horses in the final. With also a 9.3 for jumping and an 8.9 for the way of going in between the obstacles, Luka-Cara (Akarah Hero Z out of Vera Cara sport-spr prest by Casco, breeder H.W.M. Hekking from Raalte) took third place under owner Rianne Nalis. The highest points of the day were for the KWPN-approved stallion Lambada Shake AG (Aganix du Seigneur out of Grappa AG by Spartacus, breeder Alex Gisbertz from Beek) under Tim van den Oetelaar. With the high-quality stallion from Stal Hendrix, the Lammers and Jan van Meever family, the rider finished just outside the time allowed and therefore ran into one expensive time penalty. That turned out to be the difference between the victory and ninth place. “We saw really good horses today, the top 10 consists of horses that I expect to see again in the big sport”, Enda Carroll responded enthusiastically.

View all results of the Blom Cup here.