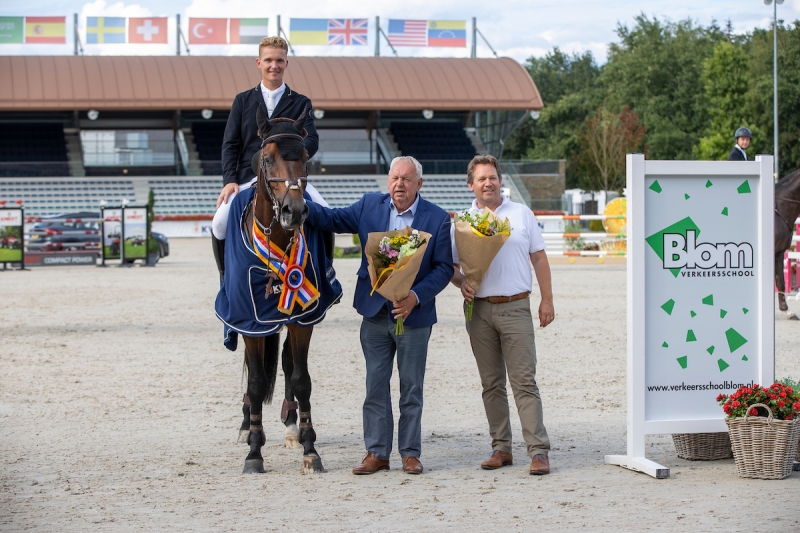 After winning the semi-final, Ruben Romp also won the final of the Blom Cup for seven-year-olds with the Biscayo son Icarus V owned by main sponsor Rinus Blom and Robert Muntel. He received the Championship title.

It was three days of super top sport at the beautiful Tops International Arena in Valkenswaard. It stayed that way until the very last ride. In the KWPN Championship for seven-year-olds for the Blom Cup, seven combinations qualified for the all-important jump-off. Ruben Romp had come to the Blom Cup with one horse and with Icarus V (Biscayo out of Carentina by Caretino, breeder M. Verschoor from Haarle) he delivered a perfect direct hit. They won both the semi-finals ánd the final, in which all 20 qualified seven-year-olds started from scratch. With force majeure! “I think everyone here comes to win, that’s certainly the case for me. It is also well-deserved for the owners”, says a happy Ruben Romp. “Icarus V is very fast by nature, which is a big advantage. This week everything turned out well and that also gives a lot of confidence for our future ahead.”

Sophie Hinners also made an excellent attempt to take the lead in this championship with Istabraq TCS (Durrant out of Cor de la Crow Z by Crown Z, breeders Tim and Leida Collins-Strijk and Egbert Schep) and finished second with the gelding from Stal Hendrix. The third-placed KWPN-approved Incanto VDL (Kannan out of Donnalina ster pref PROK by Indoctro, breeders Gebroeders Lohuis from Nijverdal) with James Billington also got an easy clear in the jump-off with James Billington. Another striking Kannan son took fifth prize, the well-build KWPN approved stallion Investment I.B. (out of Reggae elite sport-spr pref prest PROK by Emilion, breeder G.J.H. Markvorst-van de Vede from Brucht) under Patrick van der Schans. Isabel ster sport-spr (Captain Cooper out of Amalia elite IBOP-spr PROK of Nonstop, breeder H. van de Boomen from Valkenswaard) who finished sixth was eligible for the breeders premium for best mare, made available by the 'Friends of KWPN'. The fourth prize went to Ici (Douglas out of Ultralux Beezie keur sport-spr by Lux, breeder Laumans Family from Venlo) under Shane O'Meara, who was sold through the Dutch Sport Horse Sales