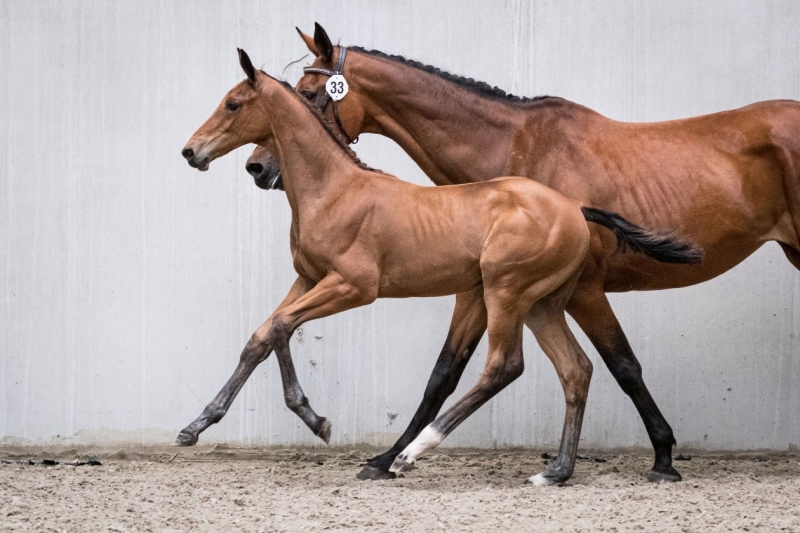 In total 80% of the foals were sold. Foreign investors know how to appreciate the foals of the KWPN online foal auctions. Again during this 4th edition, half of the foals are sold to foreign countries.

Buyers from Russia, Sweden, Finland, Belgium, Italy, Spain, Ireland, United Kingdom, Germany, and the Netherlands were in charge. The average price was slightly under 4.000 euros. This auction was in collaboration with the VDL Stud.

8.500 Euros for the Dallas VDL daughter
A Russian client managed to get the Dallas VDL daughter Pallasse K Ryal for 8.500 euros. She became the most expensive foal of this edition. For 4.500 euros this same client managed to get Polevus (s.Carrera VDL). The mares were in good taste this edition since the second most expensive foal was a daughter of Jardonnay VDL, Peggy-Sue D was sold to Sweden for 6.000 euros. Several other bidders had their eye on Pierrot T, a son of Hardrock Z. He was sold for 5.000 euros and stays in the Netherlands.

Next edition
Next Monday, the 7th of September the 5th collection will be online. The bidding will start on Friday 11 September and will end on Monday the 14th of September. Do you want to stay informed about the auctions and the latest news about it? Sign up as an auction subscriber and we will keep you updated.