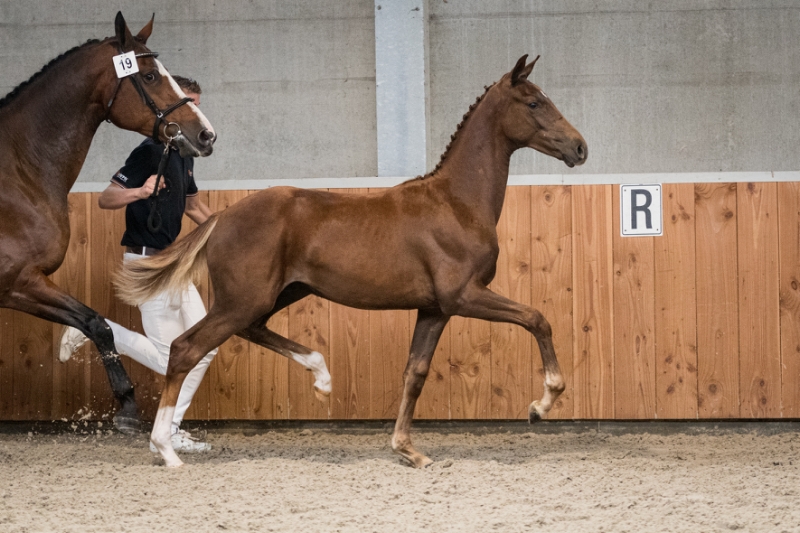 Are you looking for an interesting foal? After the first edition of the Future Dressage Foal auction last Monday, the sixth collection of the online foal auction is already open.

11 Jumping foals and 18 dressage foals are presented at the auction website. The sixth edition distinguishes itself by all sport generated by the dam line. Besides that several approved stallions are found in the dam lines from these auction foals.

Direct relative Lottie foundation
What do you think of Pomino D’N Hop? This colt from Opium JW van de Moerhoeve TN is a direct relative of the known Lottie foundation. He is the half-brother of the international 1.60m horse Demilion W (s.Emilion), his grand-dam is the full-sister of the Grand Prix horse Richmond W (s.Burggraaf) and his great-great granddam brought the Grand Prix horses Tennessee W (s.Concorde, Lottie W (s.Nimmerdor) and Jarno W (s.Notaris). Also, the 1.60m horse Wiesielottie and the KWPN approved stallion Jumper Verdi are from this same dam line.

Dam line of four approved stallions
The second offspring of Tangelo van de Zuuthoeve is the filly Pandora. Her dam, Donna Karan (s.Quidam de Revel), is the half-sister of the KWPN approved stallions Alana (s.Padinus), who also proved himself up till 1.50m level, Vincenzo (s.Numero Uno), Back Gammon (s.Montender), and the 1.40m horse Babel (s.Chin Chin) and several other 1.30/1.35m horses. Also, the Grand Prix horse Ivar (s.Ekstein) and the KWPN approved stallion Caruso (s.Notaris) are from the direct damline of Pandora.

Two full-brothers
Le Formidable has two full-brothers offsprings within this collection, Pearl Jam and Paparazzi. These chestnut colts both have the Small Tour mare Electra (s.Apache) as their dam, who brought these talented foals by ET. Several national dressage horses are from this dam line.

Half-sister Big Tour horse
The pedigree of the Kilian son Poker has an abundance of sport horses. His dam Dayenne (s.Zizi Top) is the half-sister of the Big Tour horse Crespo B (s.Vivaldi) and from several other Medium advanced dressage horses. She is also the full-sister of the Small Tour horse Easy Top’s Flemming. His great granddam is the funding of the international Grand Prix horse Pavarottie 85 (s.Ferro), the Small Tour horses Maronia (s.Caprimond) and Haronia-Donna (s.Bordeaux) and many more talented dressage horses.

Your future talent
The bidding starts this Friday and is open until Monday evening from 8 PM. Are you not subscribed as a bidder yet? This is easily done via www.kwpn.auction. If subscribed, you will get updated on all KWPN auctions. Are you looking for a potential sport horse? A talent for the future? Look for the collection and make your choice. Feel free to ask questions to our KWPN inspectors about the foals. Next to that our sponsor Horses2Fly can support you with international transportation. Any questions? Feel free to contact Rianka Hazeleger via salespromotion@kwpn.nl, 0341-255511, or call Wim Versteeg via +316-54201800.