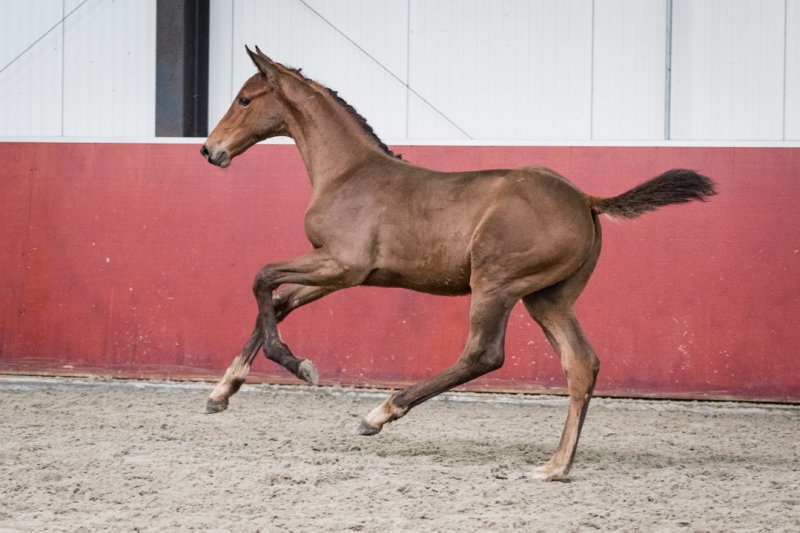 The next round has started! Last Monday the 7th collection of the Online Foal Auction has been launched. 26 foals will be auction upcoming Monday the 5th of October from 8 PM. This Friday the bidding starts to get grip on your future talent!

11 Jumping foals and 15 dressage foals are already visible at our auction website. Already excited to get to know the talent of these foals?

1.60m horses within damline
Colt Philvano D is combined through very successful sport and breeding bloodlines. Sire Clarimo won, among other shows, at Falstebro together with his rider Rolf-Goran Bengtsson. His talent is passed through his offspring and brought many Grand Prix horses and approved stallions. His dam Dilvana is from a very impressive damline. Granddam Donate brought several successful jumping horses who got to the highest level, such as Levano (1.60m level) with Andrew Bourns, Ponita 18 (1.60m level) together with Radoslaw Zalewski, the incredible mare Silvana HDC (1.60m level) together with Kevin Staut and also Jilvano proved himself up till 1.60m level. The recent approved stallion Mevano (s.Grandorado) from Willem Greve is also from this damline. Other approved stallions are Silvano (s.Le Mexico), Levano (s.Hofnar), and Chopard VDB Z (s.Canadian River.

Versatility in the damline
Also, the Eldorado van de Zeshoek colt Pinky Swear has an impressive damline. This is partly due to the versatility within this damline. His dam Whoopie brought the approved stallion Envoy (s.Numero Uno) and the Grand Prix horses Jalandria (s.Emilion), Phentagera B (s. Quidam de Revel), and O.Cor D’Emilion (s.Cor D’Alme) are from this same damline. Also, high-level dressage oriented horses are seen in this damline.

International Sportperformances
Postara Gold (s.Tangelo van de Zuuthoeve) has the highest expectation rate for jumping, which is 133,36%. This is not at random, since her dam brought the Grand Prix horses L. Apostar 155 (s.Ladalco), L.Copostar 137 (s.Palfrenier), and Noblesse Oblige (s.Guidam). Besides that, this damline is overfilled by international sport horses.

The bidding starts this Friday and is open until Monday evening from 8 PM. Are you not subscribed as a bidder yet? This is easily done via www.kwpn.auction. If subscribed, you will get updated on all KWPN auctions. Are you looking for a potential sport horse? A talent for the future? Look for the collection and make your choice. Feel free to ask questions to our KWPN inspectors about the foals. Next to that our sponsor Horses2Fly can support you with international transportation. Any questions? Feel free to contact Rianka Hazeleger via salespromotion@kwpn.nl, 0341-255511, or call Wim Versteeg via +316-54201800.

The eight and last auction for this season will be online on the 5th of October and will close on Monday the 12th of October.