Let’s start bidding! The last auction starts with foals from the damline of Apache and Johnson 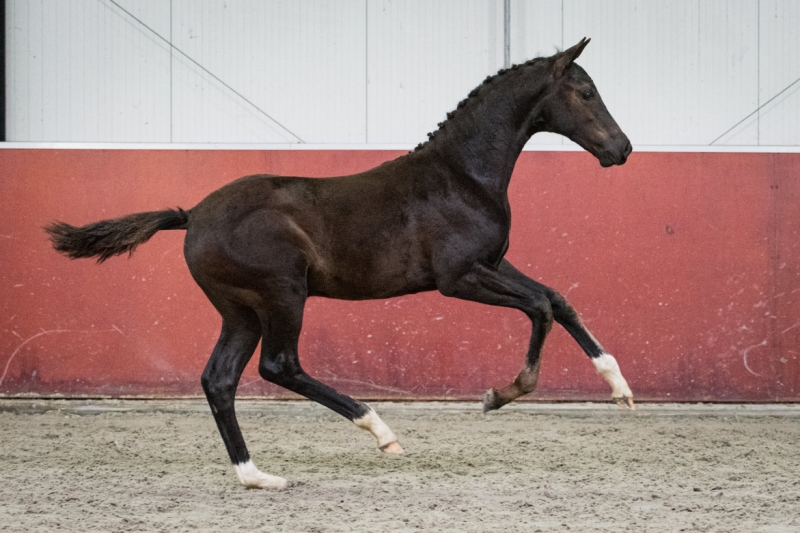 Today the bidding has started at this year’s final KWPN Online Foal auction, after a busy auction season. Fifteen jumping foals and eleven dressage foals are part of the eight collection. Again, the sport performances in this collection stand out. Are you still looking for some talent? Don’t miss out on this edition!

Damline Apache
Also Paige is from a young stallion, which is the Grand Galaxy Win son Lennox U.S.. Her dam is the Medium advanced horse Alanda (s.Rhodium). She is in her turn the half-sister of the international Grand Prix horse Zanzibar (s.Rousseau). Via granddam Olanda (s.Inspekteur) Paige is also related to Grand Prix stallion Apache, which was ridden by Emmelie Scholtens, the great stallion who passed away to soon. This damline is the foundation of many Big Tour and Small Tour horses.

Olympic stallion Johnson
Via her great granddam, the Kjento daughter Phaya Reina WJ is related to the Olympic stallion Johnson (s.Jazz), which was ridden by Hans Peter Minderhoud. However that’s not all! Her dam is the Dayana daughter Carly-Reina, who already brought the a Medium advanced offspring by Briljant. She is also the half-sister of the German Inter II horse Drakedream (s.Donnerhall), besides that uncountable other better dressage horses are from this same damline.

Approved stallion and Sport horses
The Furstenball son Furst Dior is represented by the colt Padasso. His dam is the half-sister of the Medium advanced horse Tolik (s.Highline). The KWPN approved stallion Redford (s.Krack C), the Inter I horse Elegant (s.Gribaldi) and the Small Tour horse Simson (s.Krack C) and many more are from this same damline.

1.35m dam
The Tangelo van de Zuuthoeve colt Prezanda has a dam the 1.35m mare Twilight Zone (s.Lancelot). She is the half-sister of several other 1.35m horses. The 1.50m horses Ambosell I (s.Silverstone) and Carefull (s.Carolus II), the 1.45m horse Because Of You (s.Clinton), the 1.40m horse Verona (s.Burggraaf) and many more are from this same damline.

​Your future talent
The bidding starts this Friday and is open until Monday evening from 8 PM. Are you not subscribed as a bidder yet? This is easily done via www.kwpn.auction. If subscribed, you will get updated on all KWPN auctions. Are you looking for a potential sport horse? A talent for the future? Look for the collection and make your choice. Feel free to ask questions to our KWPN inspectors about the foals. Next to that our sponsor Horses2Fly can support you with international transportation. Any questions? Feel free to contact Rianka Hazeleger via salespromotion@kwpn.nl, 0341-255511, or call Wim Versteeg via +316-54201800.