Johnson takes the lead in the WBFSH ranking 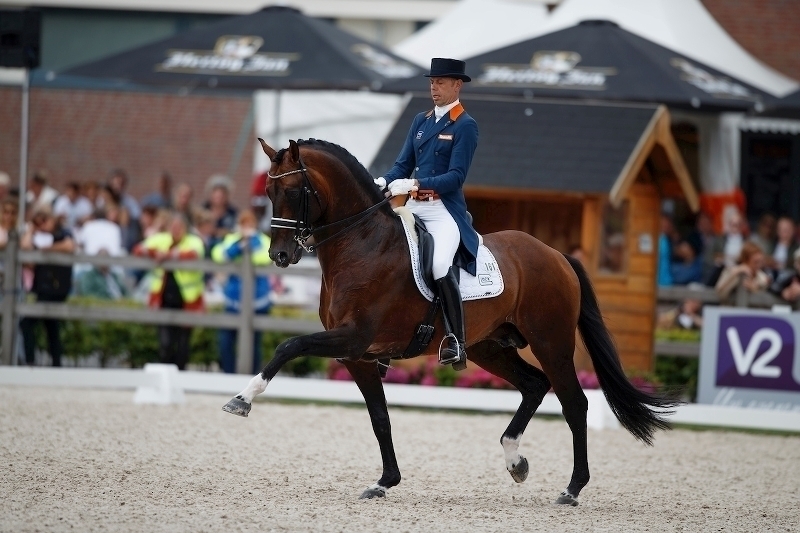 In the WBFSH studbook ranking, the KWPN leads in three disciplines, and Johnson is at the top of the ranking for dressage stallions in 2020. Followed by his father Jazz in second place. Numero Uno is the highest placed KWPN jumper stallion, he is twelfth.

The WBFSH rankings are calculated over the period October 1, 2019 to September 30, 2020. The international sport horses have earned points this year based on their performance. The Sire Ranking is calculated based on the offspring of the stallions.

Johnson
Last year the preferent stallion Jazz was at the top of the dressage horses, this year his son Johnson took over the first place. Johnson himself was active in the international Grand Prix for several years under the saddle of Hans Peter Minderhoud, but his offspring also prove themselves in the sport. Meggle’s Boston (ds.Partout) is 19th in the individual ranking, making the largest contribution to Johnson's lead. The recognized stallion Hexagon's Double Dutch (ds.Rubiquil) is just below Meggle's Boston. Boston STH (ds.Quattro) is the third Johnson son in the individual ranking.

Dressage
The legendary stallion Jazz is second in the Sire Ranking this year. His offspring, this year Zephyr (ds.Farmer), Arthur (ds.Contango) and Farringtom (ds.Samba Hit), have been highly successful in international sport for years. Keur stallion Florencio, bred in Westfalen, is fifth this year. The KWPN stallion Vivaldi is also in the top ten this year. Last year he was ninth, this year he rises to sixth place. Desperado N.O.P. (ds.Havidoff), who is seventh in the individual ranking, made the largest contribution to this. Vivaldi sons GLOCK's Dream Boy N.O.P. (ds.Ferro) and Diesel 8 (ds.Havidoff) did  it very well this year. The recognized Don Schufro and De Niro are eighth and tenth respectively in the Sire Ranking. Rousseau is 13th in 2020 and his approved sons are also gaining influence. Blue Hors Zack is in 17th place, Ampère 20th in the Sire Ranking.

Numero Uno
The preferent stallions Numero Uno and Verdi can no longer be ignored in the international show jumping sport. Libero H son Numero Uno is twelfth this year; Cristello (v. Voltaire), Looyman Z (v. Wellington) and Marzano (v. Artos Z) made the largest contribution to this breeding success. Verdi closely follows Numero Uno, he is 13th. His daughter Evita SG Z (ds.Codexco) was the most successful in 2020. In the top ten of the Sire Ranking for show jumpers we find two German-bred stallions that serve Dutch breeding: the preferent Berlin and recognized Cardento in sixth and eighth place.

Eventing
In the Sire Ranking for eventers, the recognized stallions Jaguar Mail and Contendro I are in third and fourth place, their offspring stood out positively in the eventing sport this year. The Monaco son Radolin also produced several eventing horses, such as Lassban Radovix (ds.Castle Fox), Copper Beach and Fernhill By Night (ds.Argentinus). He was born in The Netherlands, but he was used for breeding in Ireland. Radolin will be ranked 23rd in the Sire Ranking in 2020.