Who will become the KWPN Horse of the Year 2020? 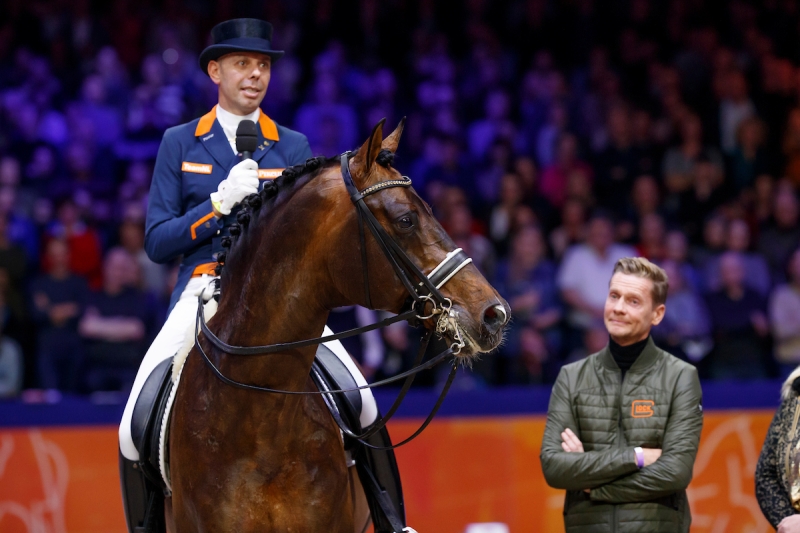 The end of this extraordinary year is near, time to make up the balance. Which horse deserves the title of ‘Horse of the Year 2020’? Like last year, you can vote on your favorite!

Cristello (Numero Uno x Voltaire)
More than a year, the Numero Uno son, Cristello, is combined with the Irish top rider Denis Lynch. They started their year with first place in the 1.50m during the World Cup qualification in Leipzig. Besides that, in this year’s special competition season, they had five other top 5-ratings. In St. Tropez's third week of September, Cristello knew to win the 1.60m Grand Prix. One week later, he became fourth at the same 1.60m Grand Prix of St. Tropez.

Dana Blue (Mr. Blue x Hemmingway)
If there is one combination who was successful this year, it was Dana Blue with Maikel van der Vleuten. Two weeks in a row, the grey mare knew how to win the 1.55m/1.60m Grand Prix of St. Tropez, which was the first international competition since March. In August, she became seventh in the 1.60m Grand Prix of St. Tropez, in the half of October, she won the 1.50m course at the same location. At the beginning of this year, she became third in the Grand Prix of Bordeaux, third in the 1.50m/1.55m of Doha, tenth in the Grand Prix of Doha, and seventh in the Global Champions League of Doha.

Desperado N.O.P. (Vivaldi x Havidoff)
At the Dutch championships, the black stallion, Desperado N.O.P. (s. Vivaldi) took bronze together with Emmelie Scholtens. At the only other competition of this year where they appeared, jumping Amsterdam, they became third too. Desperado scored 77,87% in this Grand Prix and was asked to join the award ceremony, in the Kur he had a score of more than 80% which placed him as eight.

GC Chopin’s Bushi (Contendro II x Nairobi)
Denis Lynch’s second asset also seems to be in shape. The fourteen-year-old Contrendro II son, GC Chopin’s Bushi, shows he is of great value for this Irish rider. The second weekend of January, they had three top 5-rankings and a fifth place in the World Cup qualification. One week later, they won the World Cup qualification of Leipzig, one week further, they became second in the 1.55m of Gotenburg, the last competition before the corona-break they ended at the first place in the 1.50m of Dortmund. Previously, they had several top 5-rankings in the 1.45m and 1.50m.

Glamourdale (Lord Leatherdale x Negro)
The expectations were high and he made it a reality. This year, Glamourdale debuted in the Grand Prix with his rider Charlotte Fry with almost 78%. In this year’s beginning, they already had a Big Tour debut, which they won with more than 74%. Besides that, this previous world champion, also, has his first KWPN approved son, the Gelders stallion Mandienio WL.

Zaïre-E (Son De Niro x Jazz)
The second mare nominated, is the Son de Niro daughter, Zaïre-E. Together with the German rider, Jessica van Bredow-Werndl, at her age of 16 she still shows to be in shape. This year, they had a personal record score of 85,335% in the Kur on music in Aarhus. In the Hungarian Mariakalnok, the combination knew how to win both the Grand Prix as Kur on music, became twice fourth at Jumping Amsterdam, twice a second place in Hagen, and twice the third place at Aarhus.

Last year, this title was given to GLOCK’s Johnson TN, he was personally honored at the KWPN Stallion Show. Do you want to go back to this moment once again? Then watch the video shown below.