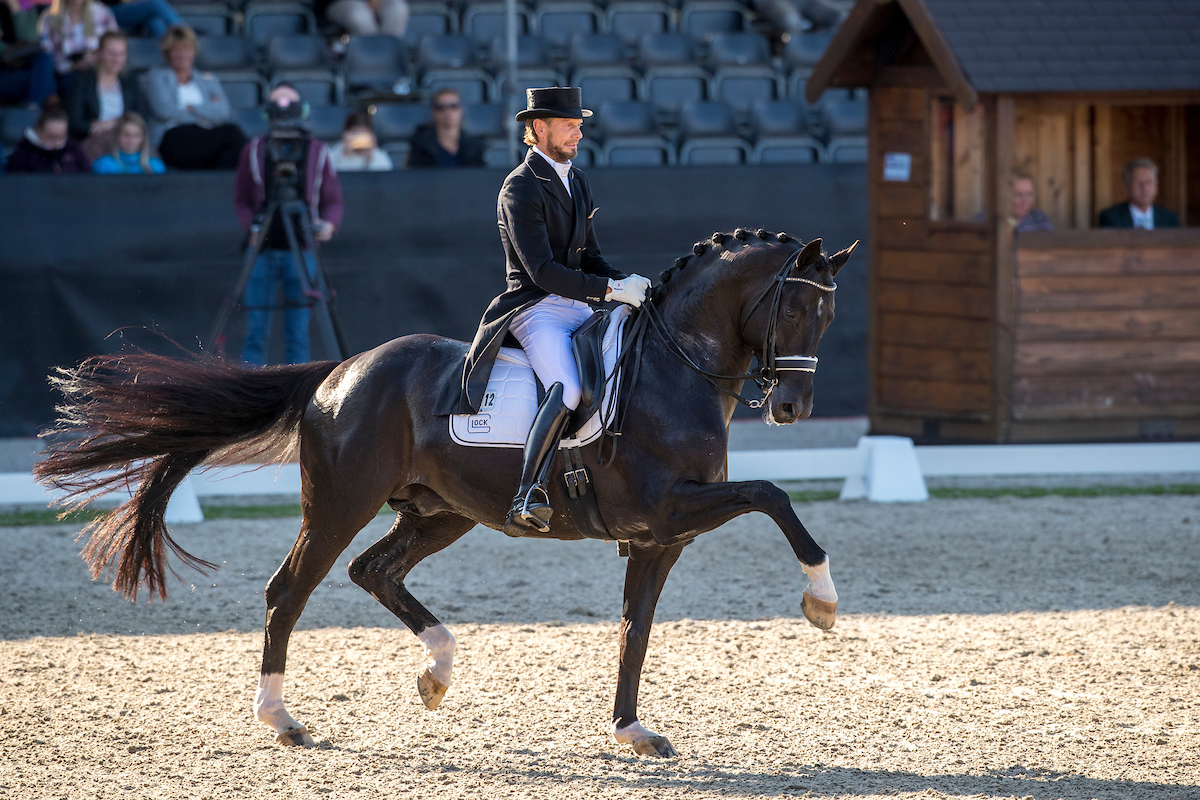 We take a closer look at the highly rated son of Totilas, who is impressing with Edward Gal...

Ten years after Totilas and Edward Gal conquered the world, dazzling in the Dressage arena, could his son, GLOCK’s Toto Jr (Totilas out of Desperada from Desperados, breeder Schmidt from Naumburg in Germany), be ready to take on his sire’s mantle? Well the answer could be, yes. Yes, he can. GLOCK’s Toto Jr was recently crowned Dutch national champion in Ermelo. Ridden by Gal, the nine-year-old scored 80.68 per cent in the Grand Prix Special and was the only horse to reach the 80s. The duo then scored a whopping 86.15 per cent in the Freestyle the following day. Fittingly, Gal used the same music and floor plan he used 10 years previously when he and the great Totilas won three gold medals at the FEI World Equestrian Games™ in Kentucky in 2010. Shortly after that Totilas was sold to Germany, leaving the Dutch Dressage community devastated. History will hopefully repeat itself with medals and results, but not in shock sales.

Let's find out more...
For Gal, repeating the same Freestyle routine, almost exactly 10 years later, on the offspring of Totilas was a big deal moment. Gal said “When Toto Jr was three years old I already knew that if there was a horse that could run the Freestyle of Totilas it would be him. I’ve waited seven years for it. It’s still daring to say, but I have the feeling that GLOCK’s Toto Jr can be even better than his father.” He has all the ingredients to make it on the world stage; Toto Jr has power and posture, elegance and ground cover. And he looks just like his Dad. Toto Jr is one of Totilas’ first crop of foals and his most high achieving one to date. Toto Jr was approved for KWPN breeding and has been a prolific stallion himself, siring around 700 foals.

GLOCK, not surprisingly is proud to have him on their books, saying: “In the walk, GLOCK’s Toto Jr demonstrates outstanding ground cover whilst, in the trot and canter, his light-footedness, balance and strong uphill tendency are captivating. His nature is also of outstanding quality. As a youngster he was presented onto the KWPN show circuit by former GLOCK rider Marieke van der Putten. Together they won the Pavo Cup Finals in 2016 when Toto Jr was a five-year-old. The hype around this horse has been validated by his national championship win. The excitement is already building to his international debut in 2021; if the soon-to-be 10-year-old can impress he will surely be under consideration for the Tokyo Olympics. Those added ingredients of high hopes and patience have paid off so far. Could world-beating history repeat itself with this beautiful black stallion?

Source: FEI / edited by the KWPN