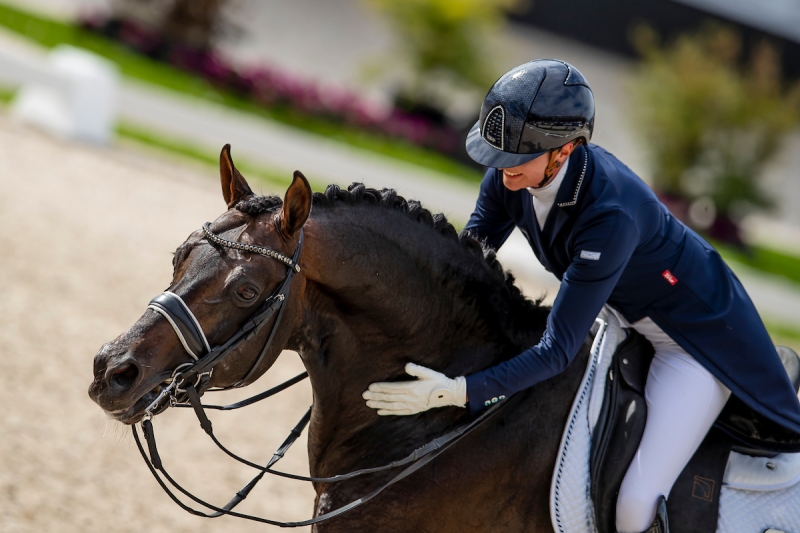 After Apache was declared keur two years ago, he is posthumously declared preferent at the KWPN Stallion Inspection this year. The striking UB40 son himself was at the top of the international Grand Prix under Emmelie Scholtens, his oldest children also breaking through at this level. During the KWPN Stallion Inspection, a pre-recorded item will be broadcast on February 5th featuring Emmelie Scholtens and Ad Valk. The complete KWPN Stallion Show 2021 can be followed online for free at kwpn.org.

Grand Prix
Apache was bred by Tonnie van der Koppel out of the Krack C daughter Tolanda. In the autumn of 2008 Apache, then owned by Ad Valk, was registered in the studbook. Emmelie Scholtens took place in the saddle of Apache and trained him to the Grand Prix, the combination took part in the World Equestrian Games in Tryon and finished eighth in the World Cup Final in 2019 with a score over 80%. In September 2019 the stallion died of incurable laminitis.

Willing to work
“Apache was a very special horse to all of us”, says Emmelie. “Of course he was special for Ad and Annemiek, but also for Jeroen and me. The whole road we did with him was something very unique. It is a pity that he is no longer here, but of course it is great that he is declared preferent. In his offspring I see a lot of Apache himself, in particular a piece of intelligence. His offspring are significantly more intelligent than other horses. He competed Grand Prix himself and it is nice to see that his children are also going to do this, he lives up to his expectations in breeding. There is also a lot of workability involved, while many people thought Apache was a difficult horse. He behaved like a stallion, but was very willing to work and he passes that on. His offspring, such as Indian Rock, are a joy to work with. I really see Apache back in his offspring.”

Offspring
Apache's offspring stand out at all levels in dressage. A number of his offspring are successful in the Big Tour, including Gio ridden by Charlotte Dujardin, Gaudi Vita by Joyce Heuitink, Ferrari STH by Jeanine Nekeman, Flanell by Veronique Roerink and Hot Chocolate by Esmee van Gijtenbeek. Another very striking offspring of Apache is the stallion Jovian, who became World Champion of the five-year-old dressage horses in 2019.

High reliability
The preferent predicate is awarded to stallions whose first crop is at least eleven years old, the conformation and sport inheritance of offspring distinguishes itself positively and the stallion has a sport index from 140 with a reliability of at least 85%. 249 Apache daughters are registered in the studbook, 71% of them have the ster predicate or higher. His breeding value is 154 and his reliability is remarkably high at 95%. His breeding values ​​for conformation and free movement of 109 and 114 respectively with a reliability of 96% are above the average as well.