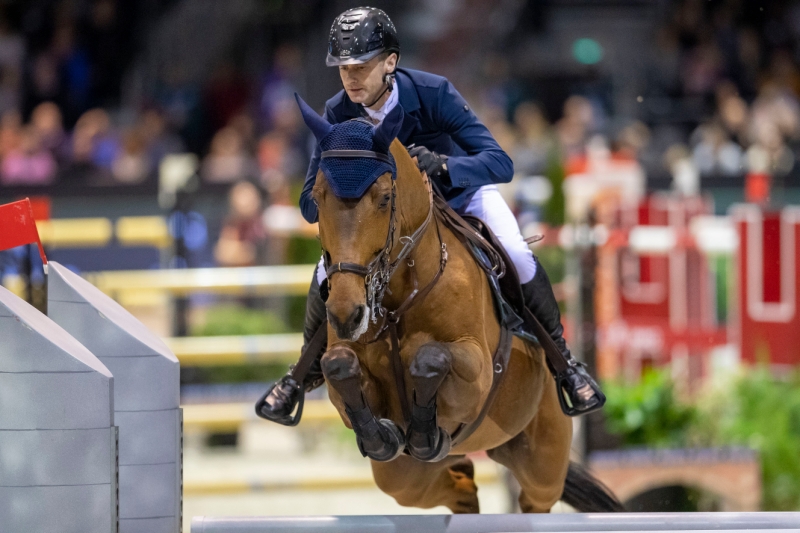 On behalf of the Friends of the KWPN, Ralph van Venrooij visited Cor and Frans van der Steen in Esch. They received a breeder premium for their homebred GC Chopin’s Bushi (by Contendro II), this gelding lists second at the 2020 WBFSH-rankings for showjumpers.

GC Chopin’s Bushi was remarkably successful with Irish rider Denis Lynch last year. The combination seized multiple wins, including Dortmund and the World Cup of Leipzig. The breeding product of Cor and Frans secured a large number of clears and top placements in other world cup qualifications and CSI5* shows, too. GC Chopin’s Bushi is a son of Contendro II out of the Nairobi-daughter Ushi; a result of years of passionate breeding by the brothers.

Thoroughbreds
Bushi was the last jumper foal that the brothers bred, after that they made the transfer to dressage breeding. “He is the last of a long series of showjumpers, for which we always aimed at a combination of thoroughbreds and horses with power and scope, that were sometimes slightly heavier”, says Cor. Frans explains: “In order to arrive at Bushi, we have used various types of stallions. His dam was lacking some elasticity and I thought Contendro II was very athletic in his jumping. Ushi needed that and that’s how we bred Bushi.”

Reach its potential
According to Cor one must give credit where it’s due; not only to the breeders as also the rider deserves it. “I think Denis Lynch is a great match for Bushi. He enables a showjumper to reach its full potential. In the past, I had that same feeling with riders such as Bert Romp and Maikel van der Vleuten. Dennis lets Bushi do precisely what he excels at, I reckon he becomes Olympian champion!”. By now, there are no longer showjumpers but exclusively dressage horses at the brothers’ stables. “The succession is secured, hopefully set out for the Grand Prix.”